Chalk Talk: Q&A with the sports editor of The Fresno State Collegian 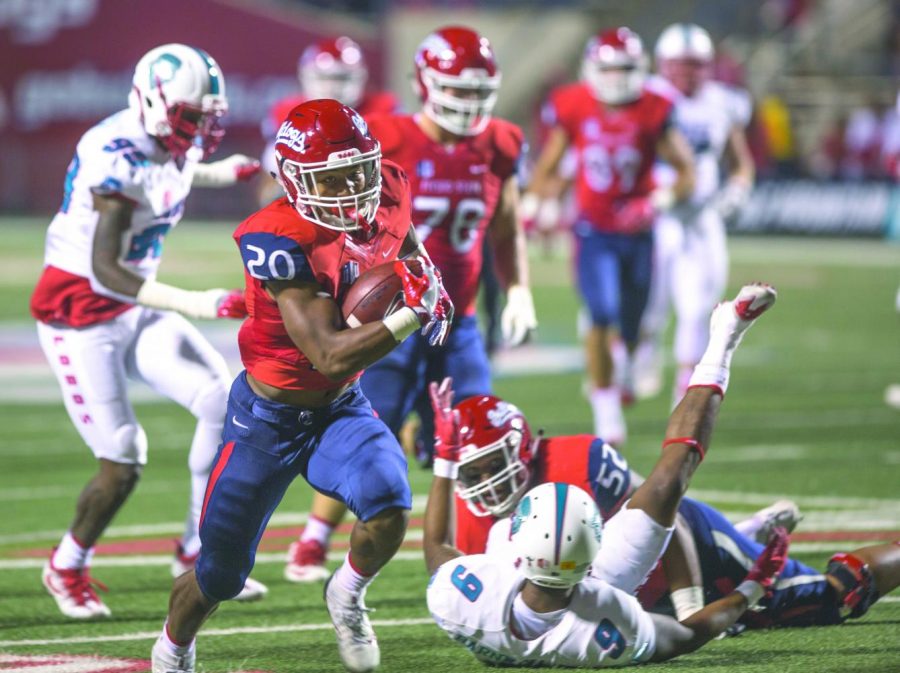 Freshman running back Ronnie Rivers separates from the defense during Fresno State’s 38-0 win over New Mexico on Oct. 14. SDSU faces Fresno on Oct. 21 at SDCCU Stadium.

Ahead of San Diego State football’s matchup with Mountain West rival Fresno State University, The Daily Aztec emailed with Daniel Gilgich, the sports editor at The Fresno State Collegian, for an in-depth look at the Bulldogs.

Here is what he had to say about the Battle for the Old Oil Can.

How has the program changed under head coach Jeff Tedford? Is there any more excitement surrounding the program?

The obvious change under Tedford is that the Bulldogs are actually winning games, many with ease, which is reminiscent of the Derek Carr days.

In the past, opposing running backs would run all over the Bulldogs – Donnel Pumphrey and others couldn’t be stopped.

Fresno State ranks 14th nationally in running yards allowed, and just held a New Mexico team that is averaging 240 yards per game to only 109 yards.

Tedford has brought back a physical style of play that was sorely missed.

There is much more excitement surrounding the program, but unfortunately for the athletic department, it hasn’t translated into sold-out games.

That being said, attendance is much better than last year, and if Fresno State keeps winning, I expect a packed house for the Boise State game.

How did the two road games against Alabama and Washington help the team going forward? How has Fresno improved since then?

Coming off a 1-11 season and a coaching change, the Bulldogs had no business playing Alabama and Washington, especially on the road.

Although they lost by wide margins, the Bulldogs got the chance to play two excellently coached and very physical teams, which I think prepared them for the Mountain West schedule.

The Alabama game showed how physical this new Fresno State team is.

Like I mentioned earlier, the offensive line had its way with Alabama, which usually doesn’t happen to the Crimson Tide.

The Washington game showed what sophomore quarterback Marcus McMaryion is capable of doing.

Although he didn’t play particularly well, he entered the game in the second half and gave the offense some life.

Fresno State’s run defense has shored up, and the offense has produced consistently through the air and on the ground since struggling against the two powerhouses. They’ve built on the physical presence that they established in those games and are starting to physically outplay their Mountain West opponents.

Why did Tedford decide to make a quarterback switch? What does MacMaryion bring to the table?

Tedford decided to make the change because he obviously felt that McMaryion gave the team a better chance to win than former starter, junior Chason Virgil.

Virgil was inconsistent much of last year, and he didn’t show much in terms of arm talent and pocket presence.

In his short time as the starter, McMaryion has already shown a better accuracy than Fresno State fans have seen in a few years. Also, if McMaryion gets in trouble in the pocket, he’s athletic enough to pick up a first down with his feet.

Probably the only reason it took so long for McMaryion to earn the starting job is because he arrived in Fall camp from Oregon State, while Virgil has been here for years. It’s a homecoming story for McMaryion. He went to high school in nearby Dinuba, and now he returns to the Central Valley to lead the Bulldogs.

How does the running back by committee offense work? Does the lack of a No. 1 rusher hurt the offense?

The lack of a No. 1 rusher does not hurt the offense at all. Instead, it helps the offense because it keeps the backs fresh, and in the case of injury, the coaches know that there are other guys that they can trust to step up.

Freshman running back Ronnie Rivers has been the leading rusher so far, but he sustained an elbow injury against New Mexico, and it is still unknown how long he will be out, if at all.

If he is out, sophomore running Josh Hokit and freshman Jordan Mims should split the carries.

Hokit burst onto the scene at the end of last year — he was playing linebacker and switched to running back with two games to go. He’s a special athlete who can get the ‘Dogs four or five yards up the middle. He’s also on the wrestling team, which is starting back up in November, so he’s fun to watch.

Do the Bulldogs value this rivalry?

The Bulldogs value this rivalry 100 percent.

If they were able to pick up the win, it would speed up the rebuilding process even more and cement them as favorites in the West division.

Beating rival San Jose State was a great experience for the team, and they would love to pick up another win against another rival.

They brought the Valley Trophy back from San Jose, and I know they would like nothing more than to bring home the Oil Can Trophy.

If you had asked me who I thought would win before last weekend, I would’ve said San Diego State without giving it a second thought.

I didn’t think that the Aztecs would get dominated by Boise State at home, and I also didn’t think Fresno State would shut out New Mexico 38-0.

I know senior running back Rashaad Penny will have something to say about this, but if the defense can stifle him, then there’s no reason why Fresno State won’t return home with a win.