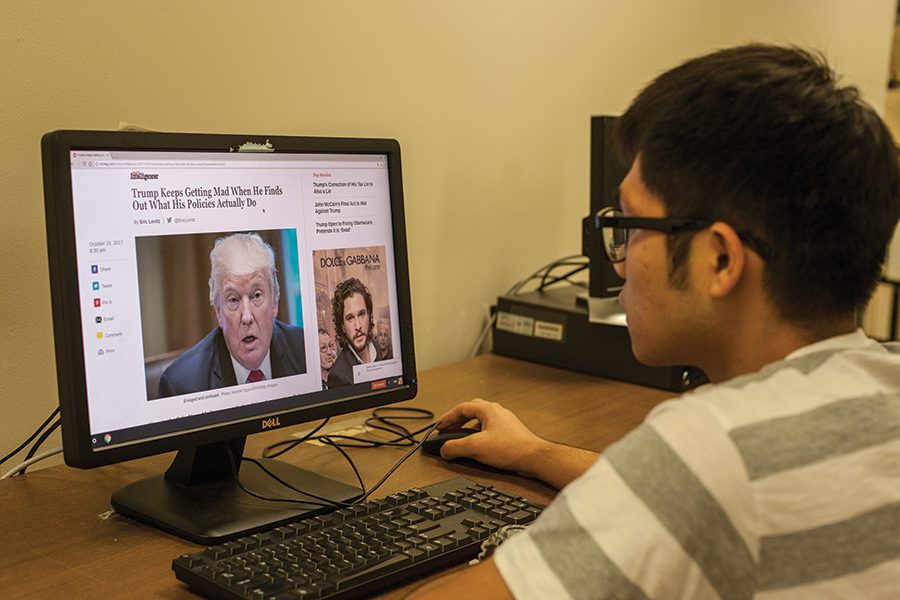 Innovation management and business development senior Raphael Wittkopf, who came from Germany in August and is studying at SDSU until January, said he believes threats of war, military intervention and isolation are not ideal to solving any conflict.

“In my opinion, the U.S. follows a policy of self-isolation instead of communication and cooperation,” Wittkopf said.

Wittkopf  said internal troubles within the White House and its staff stand out to him. He said that the hiring and firing of staff members seems to be frequent in the U.S.

Journalism and media studies freshman Cynthia Pelletier, who arrived from France this semester was critical of President Donald Trump’s demeanor.

“For me, he is the kind of person who would say (any)thing to make people happy, but doesn’t act after,” Pelletier said.

Despite this, Pelletier stated that she finds similarities between President Trump and French President Emmanuel Macron.

“They both want power and to lead, and they both talk a lot but don’t act,” Pelletier said.

For economics junior Henry Mau, a student from Italy, making sense of the politics in the U.S. has been difficult, having found many aspects of the presidency incomprehensible.

“Society is super polarized and it seems very difficult to get a majority of people behind even the easiest things,” Mau said. “Problems like the ending of the Iran deal, not banning weapons like those from the Vegas shooting and denying climate change, we (Europeans) just cannot understand this.”

Marketing masters student Georgios Pallikaridis, who is of Greek descent but was born and raised in Germany, is critical of the Trump administration and its tactics.

“Compared to a leader in Germany or Greece, Trump is more of a clown than the most powerful man in the world,” he said.

Wittkopf also finds it interesting that President Trump makes use of Twitter frequently, and finds that compared to Germany, policy and presidential issues get much more media attention in the U.S.

Wittkopf said that German Chancellor Angela Merkel’s strategy of gathering different opinions before she comes to a decision is ideal and something President Trump should strive to do in the future.

“In my eyes, Mr. Trump likes to polarize and thus he often says things in such a strong way,” Wittkopf said. “Angela Merkel is more cautious in commenting (on) political issues and making decisions.”

Mau said that it is astonishing that the U.S. population elected Trump into office, and that he finds the potential threat of war with North Korea to be of particular concern.

“I find it striking the ease with which (Americans) handle the North Korea conflict,” Mau said. “I feel like (Americans) don’t realize a little spark by some leader could change the planet and the world order as we know it.”

Pallikaridis said his major concern is the widening economic disparities within classes. He said that the idea of the so-called American Dream is both misleading and a false promise.

“The biggest political problem is, in my opinion, the unjust distribution of the rich and poor in the U.S.,” Pallikaridis said. “I feel that the rich are getting richer and the poor are getting poorer, (and) ultra-rich large companies are massively tax-relieved.”

Presidency and economic policies aside, some international students have noticed a difference within the structure of governments, and the rights of citizens that are legally protected by law.

Sasha Wang, a graphic design sophomore from northern China, said that a major difference between U.S. and China is the freedoms granted to its citizens, as the people of China are restricted from criticizing the government.

The critiques that the European international students have of President Trump and his administration, would be grounds for punishment in China, such as the banning of their social media accounts, Wang said.

“Here (in the U.S.) you can basically say anything you want, you can protest and promote whatever you’re supporting,” Wang said. “But in China we can’t do that, so that’s the major difference – freedom.”