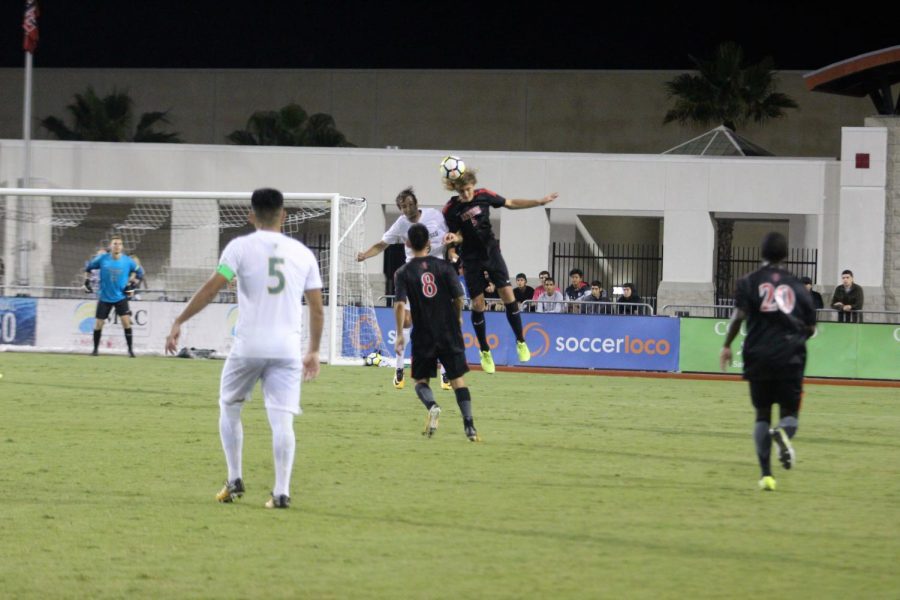 Junior defender Kyle Adams competes for a header against the University of San Francisco on Sept. 8. The Aztecs lost the match 2-1.

San Diego State men’s soccer emerged victorious against Santa Clara University on Oct. 21, winning 3-0 on a night when eight Aztecs soccer alumni had their jerseys retired by the school.

The victory for SDSU ended a five-game losing streak, all against conference opponents, during which the team was able to muster only one total goal.

Aztecs head coach Lev Kirshner said that a shutout win for the Aztecs, on a very special night, was just what the team needed to get back on track.

“We did this the right way, I mean we scored multiple goals, we kept them off the scoreboard,” Kirshner said.

The team rallied around an early two minute goal from the freshman midfielder Tevenn Roux.

Roux’s goal came when he banged a shot into the left side of the net, after being fed the ball by junior defender Ilai Shvika, who had two assists in the match.

The other two goals for the Aztecs were scored by senior forward and co-captain Jeroen Meefout.

After Saturday’s homecoming contest, Meefout now has a total of six goals on the season, leading the team.

In the 64th minute of the game, Shvika and junior midfielder Jamal Bernandez both recorded an assist to Meefout, who sent the ball into the top right corner of the net.

23 minutes later, it was Meefout again, this time without any help. Driving down the left side of the field, Meefout sent the ball to the lower right corner for the game’s final score.

Aztecs redshirt senior midfielder Dallin Cutler said that the team must remain focused, in order to get more victories.

“The consensus in the locker room is that we need to settle down, regroup after this game, refocus on our goals and just continue to work as hard as we can to get some wins,” Cutler said.

SDSU’s next game will be at home on Oct. 26, against the University of Washington, who will be looking to record their first Pac-12 conference win of the season.

The opening whistle is set to sound at 7 p.m.