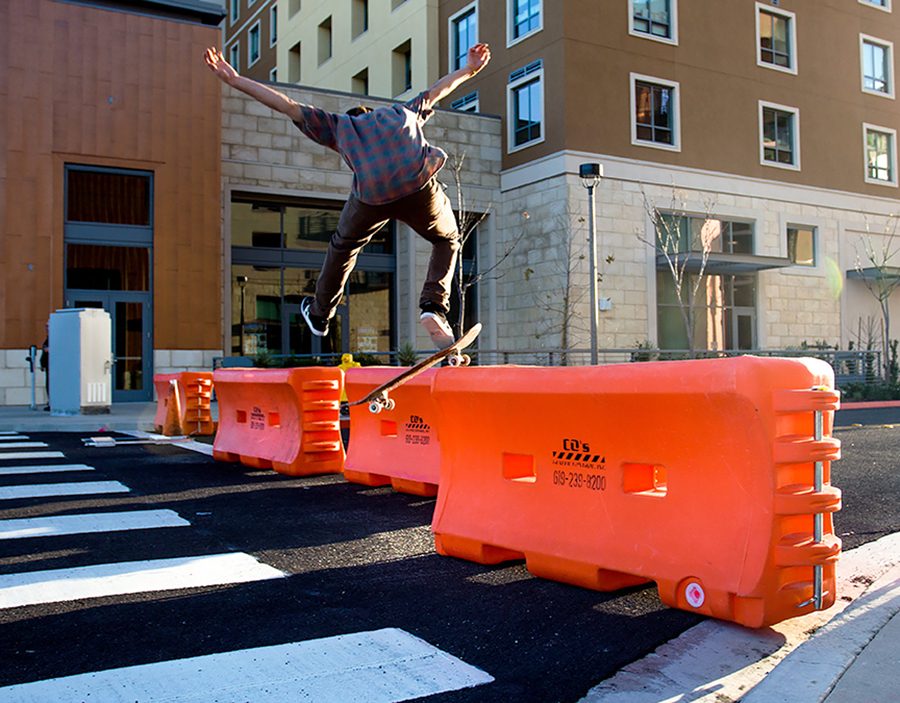 A skateboarder attempts to hop a traffic barrier near South Campus Plaza.

San Diego State police are more strictly enforcing skateboard and bicycle regulations this semester — and many students aren’t happy about it.

Skateboarders and bicyclists who don’t ride in designated lanes can receive a $75 ticket from university police, something that hasn’t always been enforced in the past. That’s changing, according to campus police Lt. Matt Conlon.

Conlon said there is increased enforcement because police have seen a rise in the number of complaints related to biking and skating in pedestrian areas.

“I get dozens of emails a month on that particular subject,” Conlon said. “It is also a safety reason, because we have had a number of skateboarding and bicycle accidents throughout the past weeks.”

Some students said part of the problem is that the university does not have enough designated areas for skateboards and bicycles.

“There (are) not enough bike lanes to go around the school,” said accounting junior Quinton Bridgeworth. “There are not enough signs posted around campus that state where you can or cannot ride your bicycle or skateboard and the cost of the ticket is way too high to pay.”

“Campus police officers are enforcing this new rule, but there are limited bicycle lane places on campus for the people that are riding to get to other specific places on campus,” Hill said.

Bike lanes are limited at SDSU. On the 283-acre campus, there is one east-west lane, one north-south lane and a few bike routes framing the perimeter of the university.

Management junior Jorge Lopez said in addition to the low number of bike lanes, he sees few people yielding to bicyclists and skateboarders in the few areas where they are allowed.

“People walk and drive on the bicycle lane which they don’t respect that the lane is only for bicyclist and skateboarders,” Lopez said.

Conlon said many students still aren’t aware of or have misconceptions about the rules.

“Some skateboarders that pass me do get off their skateboards, but others don’t because I believe that students sometimes don’t know that they cannot ride their skateboard in that specific area,” Conlon said. “The dilemma that we have is to try to get the message out, so people can know where they are supposed to be at by publishing maps (of) where they can or cannot be on their bicycle or skateboard.”

“I have seen a couple of people get into accidents with bicyclists and skateboarders,” Bolduc said.

“This new (enforcement) that campus police are putting into effect will be very helpful because it is hard to walk to class due to bicyclists and skateboarders riding where they are not supposed to,” Liebenberg said.

Conlon said money collected from tickets will be used for campus improvements.

“$75 for a student is a lot of money,” he said. “It is punitive but the money does not go to the campus police. The money gets rotated back to the program, so with that money we could do improvements on the sidewalk, better striping for the bicycle lanes or make more bicycle racks.”