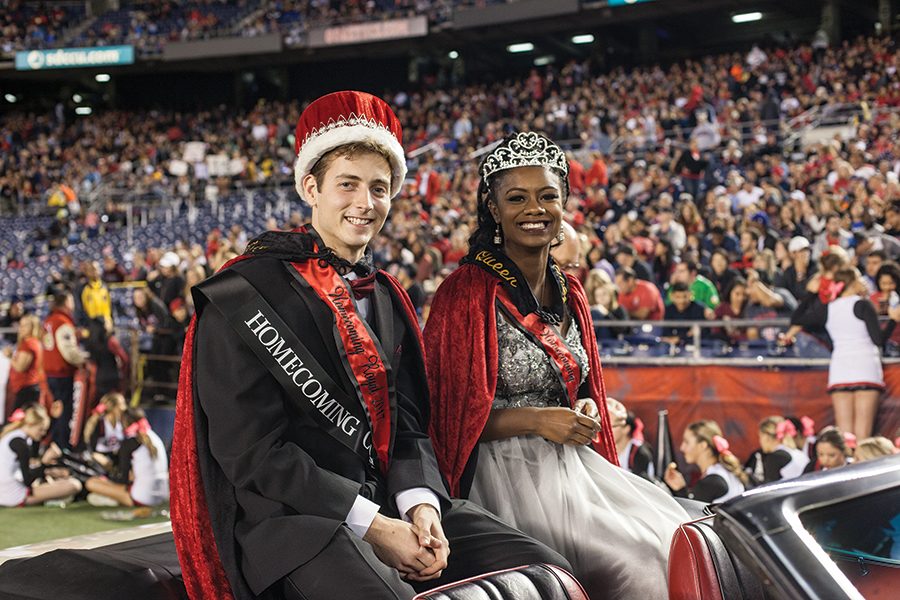 Candidates for homecoming court are selected after being nominated by Honors Council, an Associated Students council, a recognized student organization, fraternity, sorority or Greek Auxiliary, said Student Life Advisor Tierney Harrison. After being nominated, candidates go through an application process, which includes two rounds of interviews.

“We ask them about their contributions while they’re still an SDSU student,” she said. “What do they hope to model and exemplify for the community? And then we want to know what it would look like for them to be royals as alumni.”

As a part of the application process, candidates are also required to propose a service event for the upcoming spring semester based on their interests, Harrison said.

LaMar, who was nominated by the SDSU Honors Council, said his service project proposal was aimed at educating the SDSU community about student veterans and bringing both veteran and non-veteran students together.

“(Veterans) face a lot of challenges returning to school after being in the military that normal students don’t face,” he said. “Part of this service event would be identifying those challenges and coming up with ways that A.S. and the administration can help facilitate their return to campus.”

LaMar said his service event idea was inspired by his father, who returned to school after being in the military. He recalls being young and his father practicing a computer science presentation in front of him, his brother and his mother.

“That moment particularly struck me,” he said. “When you’re going back to school being so much older than everyone and maybe having a family, the entire experience is completely different for you.”

Jones, who was nominated by the Mortar Board SDSU Jane K. Smith Cap and Gown Chapter, said her service event idea was to bring awareness to SDSU students with disabilities and to educate the SDSU community on how to interact with them.

“A lot of people on this campus have never had the ability or the opportunity to interact with someone with a disability,” she said. “I thought it was important to have an event that would reach (the disabled) community and educate us on how to speak to them, how to address them, and how to interact with them.”

Jones said she wants this service event to be an interactive experience for students, rather than lecture-based.

“I wanted something that’s a little bit more interactive,” she said. “Where someone can have something tangible in that experience and walk away with it.”

The royals will coordinate one service event together, combining their different interests, Harrison said. The two will work with Student Life and Leadership and A.S. to put on this event, which will take place during the Spring 2018 semester.

Both Jones and LaMar said they were honored to receive this recognition, especially because they were nominated among a group of highly qualified students.

“So many people on that court were just outstanding people,” LaMar said. “I did not expect my name to be called, so when they called it, it was something else.”

Jones said she has looked up to homecoming royals in the past and as a royal herself, she hopes to carry on the legacy they put forth.

“I have a lot to live up to,” she said. “I just hope I represent a homecoming royal and that I do it justice by doing my part on campus.”