Missed opportunities cost Aztecs in 1-0 loss to No. 23 Washington 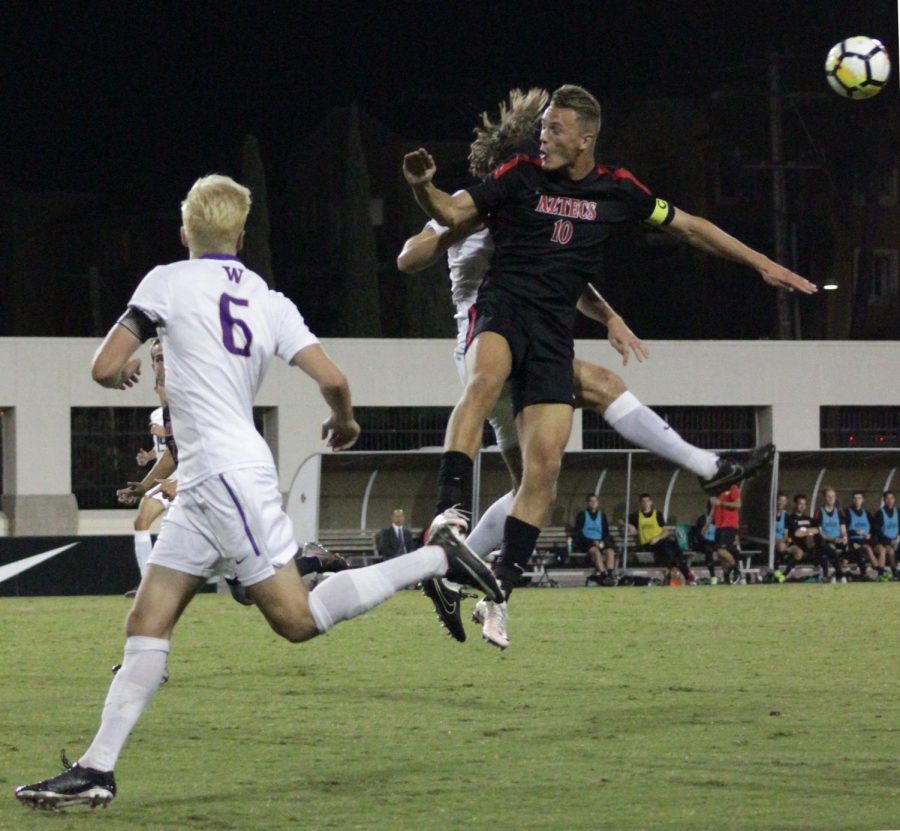 Senior forward Jeroen Meefout jumps for a header during SDSU's 0-1 loss to No. 23 Washington on Oct. 26.

SDSU’s senior forward and leading scorer Jeroen Meefout squandered two scoring chances in the first half. In the 16th minute, Meefout controlled the ball a couple of yards outside the goal, but his shot was blocked by Washington goalkeeper Saif Kerawala.

Meefout missed his second chance of the night with less than a minute left in the first half after he drew a foul inside the box and shot his penalty kick right into the hands of Kerawala.

“I’m a co-captain, and I want to help the team by scoring goals and creating chances,” Meefout said. “In that regard, it was disappointing for me today.”

SDSU was inches away from getting up on the scoreboard after redshirt-senior midfielder Dallin Cutler struck the ball in the 20th minute but came short as the ball went slightly over the net.

“We had the best two chances in the game tonight,” SDSU head coach Lev Kirshner said. “So if you tuck one of those away, then it’s a different result.”

The lone goal of the match was scored in the 38th minute by Washington redshirt-junior forward Scott Menzies who drove the ball into the net after receiving it from Washington sophomore forward Elijah Rice.

The Aztecs have yet to earn a win in Pac-12 Conference play this season.

“I think the hype of the Pac-12 sometimes gets to their heads, and we get anxious,” Cutler said.

The Aztecs are now 5-10-0 in the season, but since the 2014 season, SDSU holds a 22-9-5 record against opponents outside of conference play.

“I think we just need to keep our composure and settle down,” Cutler said. “We have so many talented players on this team.”

SDSU goalkeeper Adam Allmaras had a total of three saves in the game, bringing his total number of saves in the season up to 44. The game also marked his eighth game of the season where he allowed one or zero goals.

The Aztecs’ junior defender Kyle Adams played the full 90 minutes of the game and kept the defensive line tight throughout. Over Adams’ career as an Aztec, SDSU has only allowed 1.08 goals per game.

“The good thing about this team is they stay together and fight hard,” Kirshner said.  “They are very resilient in what they are trying to do out in between the lines. It’s a team that’s not giving up, and a season like this, I’m very proud of that.”

With only four games left, SDSU looks to get its first win in Pac-12 play against Oregon State on Sunday at 12 p.m. at the SDSU Sports Deck for its second-to-last home match.

“We have to come back on Sunday and get a result,” Kirshner said. “We got to be sharper. We got to execute better. We got to tuck away the chances we get.”