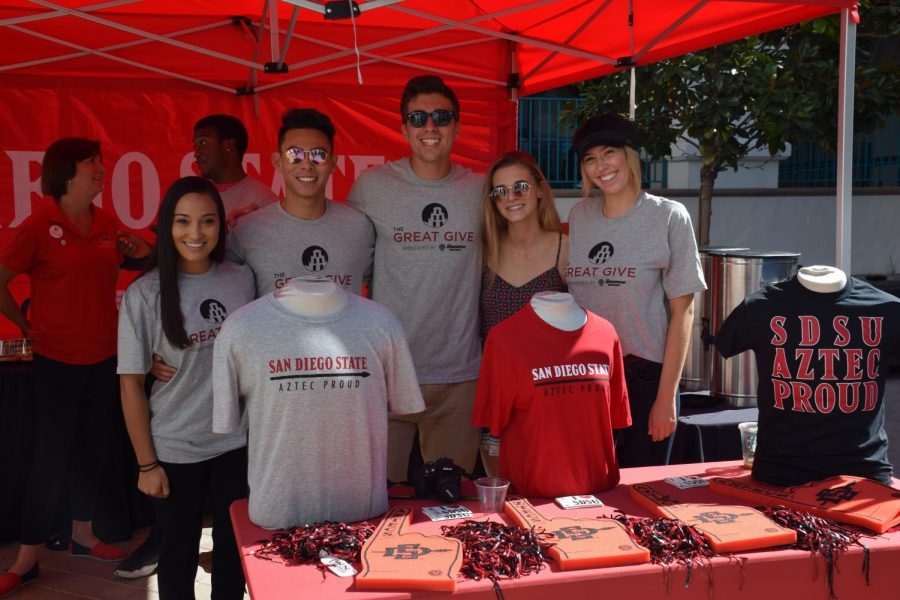 San Diego State’s Alumni Association raised more than $175,000 during its second annual 24-hour fundraiser campaign, “The Great Give,” on Oct. 24.

During last year’s fundraiser, $137,000 was donated over the course of a day, said Tammy Blackburn, SDSU Alumni Director of Development Technologies.

Only 21 percent of funding for SDSU’s budget is provided by the state, she said.

As part of The Great Give, Aztec Proud held an event at the Conrad Prebys Aztec Student Union for those who have already donated and to encourage more students to donate. Blackburn said that Aztec Proud, an organization that was started to promote philanthropy within the student body, has raised $220,000 since it was launched three years ago.

As of Oct. 27, more than $175,000 in donations has been counted, but the Campanile Foundation is still tallying gifts donated during The Great Give, said Dan Majors, assistant director of electronic solicitation, via email.

After attending orientation this summer and finding out about Aztec Proud, psychology freshman Samantha Munz said she felt inspired to donate and help out her peers on campus.

“I think it’s a really good organization and I keep coming back,” Munz said. “I hope that the people who need the money will be able to have access to it through scholarships.”

Michael Wiafe, political science sophomore, said he was feeling motivated to donate in hopes that it would help students and programs on campus in need.

Latrel Powell, political science and Africana studies junior, said he hopes that money donated to The Great Give will help to expand scholarship opportunities on campus.

“There are a lot of students who are just barely getting by,” Powell said. “I was in the political science department yesterday asking about a scholarship, and they said they don’t have the funds for it.”

Powell added that in his opinion, scholarships for students at SDSU can help to alleviate the stress of paying for school and help students like himself to be focused on academics.

“(Scholarships) really go a long way in helping me not stress out about school and really take in everything that I can from my classes instead of worrying about ‘oh, I need to work this many more hours,” Powell said. “We’re all busy, we’re all working, but it’s always nice when you get that support from your university to keep excelling.”

Teagan Deleon, business administration freshman, was inspired to donate to Aztec Proud because she said she loves SDSU and both the college and philanthropy are important to her family.

“My dad went here, so it’s kind of a family thing, and we just love giving back to allow other students to have the opportunities that I have,” Deleon said. “(Donations go) back to all the other students, so why not just do it. They do a lot of events where you get free Hydro Flasks and free snacks, so there are definitely benefits for (donating), other than helping the school.”

With years of experience as a volunteer, speech language and pathology freshman Frankie Dow said that her donation during The Great Give was also inspired by her family.

“It gives back to us a lot, and you don’t have to donate a lot either,” Dow said. “I was actually a Girl Scout, so I grew up in an environment that was very encouraging to give back to others and to help others. My family is always big on giving back.”