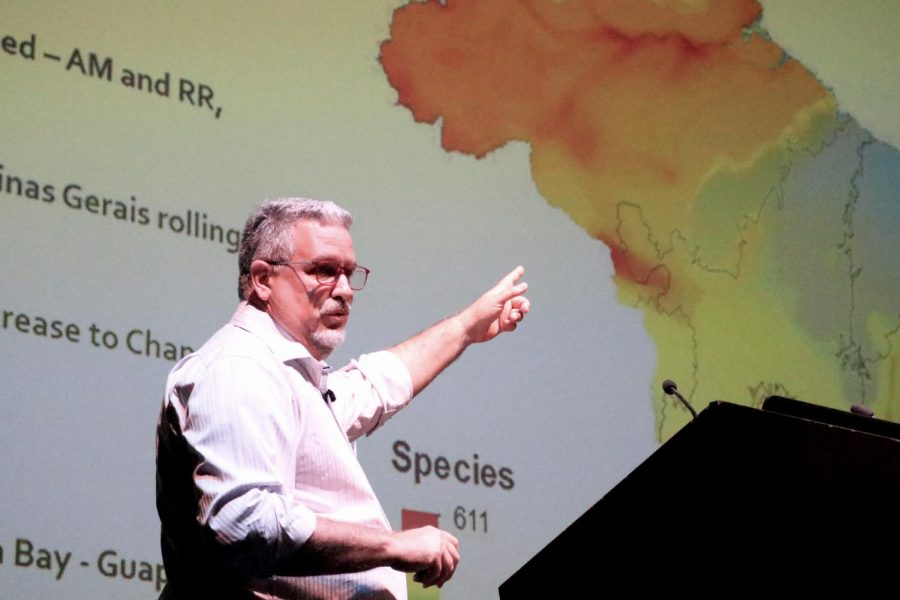 Reinaldo Lourival, an expert in environmental conservation, spoke with SDSU about the efforts needed to help sustain Brazil's ecosystems.

The talk, titled, “Sailing the Conservation Boat in Brazil’s Troubled Waters,” explained conservation efforts of Nature and Culture International, a non-profit organization dedicated to protecting the lands in South America from endangerment.

Lourival said NCI strives to “formalize the idea of conservation” by embracing the risks that come with protecting the environment.

He noted that a good outcome isn’t always guaranteed, as conservationists are often fighting against large odds. Not just from the government, but from farmers, indigenous peoples and citizens.

NCI believes that by diving headfirst into solving issues, fighting for Brazil’s land will become normalized.

“Part of the country sees [conservation] as something from the past, and can not project it into the future. So it is a big challenge,” Lourival said. “Nature has little value or place in modern society.”

One of the topics Lourival discussed was the issue of Brazil being a major agriculture purveyor.

As the third leading source of food in the world, and first leading in beef production, Brazil’s natural forests are being depleted to accommodate the massive demand for food.

Lourival and his team recently influenced Brazil’s Ministry of Environment’s decision to expand its protected land in the pantanal, Brazil’s wetlands.

“The president came to the pantanal and announced that he would create one sustainable developed reserve of about 500,000 hectares, and (double the size of) a national park and ecological station,” Lourival said.

The event was put on by Green Love, the Associated Students sustainability commission, as part of its Green Lunch Bag Series, a span of discussions with topics like sustainability and conservation.

Mario Newhouse, an environmental science senior and chair of the Green Lunch Bag Series committee, had been working to bring Lourival to SDSU since May of this year.

“Brazil is such a large country. In the hour that (Lourival) had, I (wanted) him to touch a little bit on every topic he could,” Newhouse said.

Newhouse hoped Lourival’s words would inspire students to take action and join the fight for Brazil’s rainforests and endangered species.

“I’m from (Brazil), and I was able to relate to the talk a lot,” Newhouse said. “We (Brazilians) regard the Amazon rainforest as the lung of the earth. What resonated with me most was that only 20 percent of the Amazon has been explored.”

“I was really interested to know how conservation is going over in Brazil,” Meirelles said. “We know that here in the (U.S.), especially in California where we live, people tend to put an emphasis on sustainability. But in other countries, it’s not really a big topic in society. But it’s just as important, if not more important.”

She said Lourival showed the path people are going to take towards conservation in Brazil.

“In introducing the idea of self-determination, of doing with your land the best for the future generation, we are planting the seed of protection,” Lourival said.