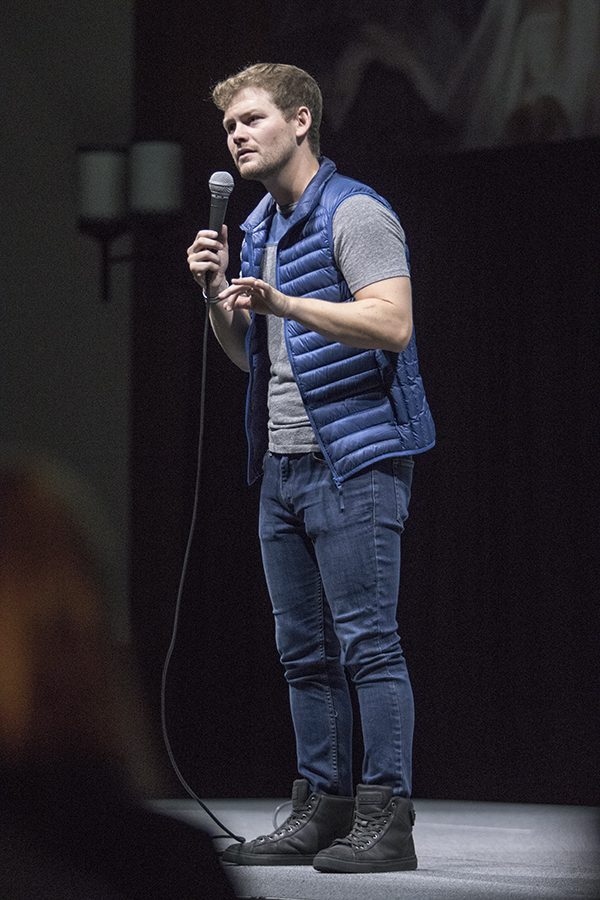 Laughter spread throughout the audience in Montezuma Hall as the stand-up comedian cracked jokes about his need for a service dog, San Diego’s lack of a fall season this year and even his severe stutter.

Liberal studies junior Tori Hancock is one of many who attended the packed event.

“I was interested in this event because I believe that Drew is an inspiration to everyone,” Hancock said. “He continues to face challenges every day, yet he doesn’t dwell on them but instead uses those challenges to motivate his choices. It takes guts to get up on stage the way he did, and there will always be haters. However, Drew shows the world how you can’t let what others think of you dictate your life.”

Lynch finished in second place on the 10th season of “America’s Got Talent.” The fan favorite currently has a YouTube channel with more than 1 million subscribers. He frequently posts videos with his service dog, Stella.

Prior to Lynch’s arrival and introduction at SDSU, the event coordinator announced that everyone in the audience was to look under their seats. Much to the crowd’s surprise, invitations to a meet and greet with Lynch were scattered under random seats throughout the hall.

The randomly selected audience members were able to meet Lynch at the end of the event.

Lynch’s large following was reflected by the popular turnout in Montezuma Hall. By the time he took the stage at 7:30 p.m., almost every seat was taken.

“Interesting art you have back here,” Lynch said of the hall’s mural at the start his performance. “Just a naked dude.”

The crowd erupted into laughter as Lynch let out his distinct high-pitched cackle.

Lynch is known for poking fun at himself as well as his disability. His jokes feature sarcasm and self-deprecating humor.

“I stutter,” Lynch said. “I have to say that at every show. Like, people look at me like, ‘Does he know? Should we tell him?’”

Lynch continued to make jokes about his disability throughout the duration of the event and encouraged the audience to laugh at themselves as well.

“It’s important to have the confidence to address your own self awareness,” Lynch said. “It’s helpful. It helps to ease the tension in your….buttholes.”

Lynch’s quirky sense of humor left no room for moments of silence in the audience. Students clapped and cheered throughout the entire performance, and even moreso when the comedian joked about his service dog.

Liberal studies junior Mackenzee Chambers attended the event because she is a big fan of Lynch.

“I thought it was a great event that was funny and lighthearted,” Chambers said. “I felt like having (Lynch) come and perform was the perfect ending to (DiversAbility Awareness) month because he is a great example of a person who conquers all adversity and became very successful despite his disability.”