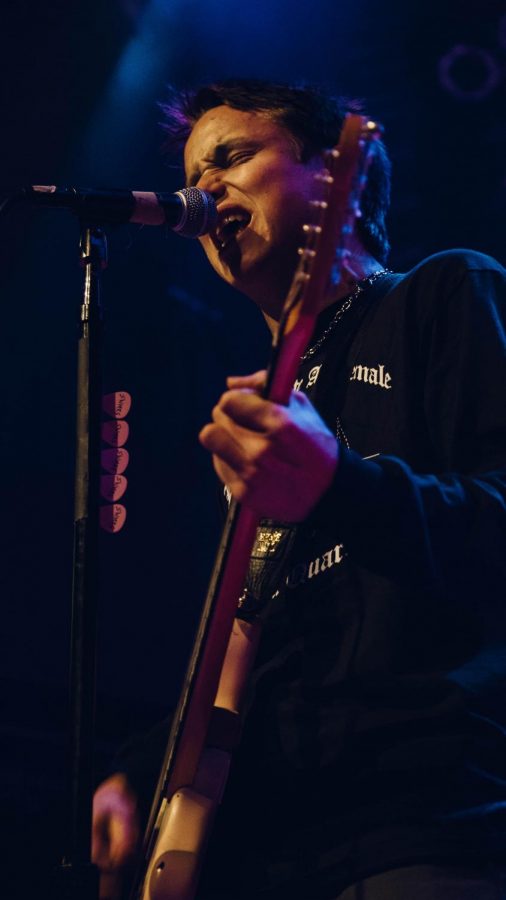 SWMRS frontman Cole Becker spoke to the crowd of people at their Oct. 29 show at The House of Blues.

“Abuse will not be tolerated here or in the future,” SWMRS lead singer Cole Becker said to a room full of angsty and sweaty music lovers.

The punk rock fusion band SWMRS, along with The Interrupters and Sharp Shock, performed at the House of Blues in San Diego on Sunday as part of their North American Co-Headline Tour.

Contradictory to the stereotype of sex, drugs, the devil and rock-n-roll, punk music and concerts are a safe space for people to put aside their differences and enjoy their love for music.

Lead singer Cole Becker spoke about sexual assault not being allowed on the floor during an intro to one of the songs.

This isn’t just the view of SWMRS.

The punk scene is known for calling out sexual assault and praising acceptance of Black Lives Matter, transgender rights and many other social issues.

“Punk is very blunt,” psychology junior Michelle Ortega said. “We’re blunt people and when we see something we don’t like, we’re like that is not okay.”

While punk is extremely blunt, it doesn’t exclude itself from being friendly and accepting to all people. The music is apathetic and relatable, so this attracts a variety of people at punk concerts.

As per usual of any punk show, moshing was a large part of the concert experience. Many punk music lovers find moshing to be thrilling and necessary for any punk concert.

“That’s why I came here,” junior mechanical engineer Holly Hagen said. “(Moshing is) an integral part of punk concerts, and I think it makes it a lot more fun than just bobbing your head.”

Ortega said there are many misconceptions about the punk scene and moshing.

Moshing is often seen as an opportunity for people to beat each other while bands strum and shout. However in reality, it is much more friendlier than that.

“If someone gets hurt and falls down, everyone is ready to pick them up,” Ortega said. “Even though it seems pretty physical, it’s not malicious at all, so people are very united in that way.”

The punk environment is meant to be a safe house for people to collectively join over their love for music—not a place for anyone to be afraid of how they will be judged or feel unsafe.

SWMRS played some of their hit songs like “Uncool” and “Silver Bullet” that focus on being true to oneself despite what society might suggest.

SWMRS and The Interrupters concluded their 16 day tour playing a show almost every night with special guest Sharp Shock, who ended the tour in San Diego.

SWMRS shows will continue with The Regrettes Nov. 30 through Dec. 17.