O-line making up for midseason missteps in big way 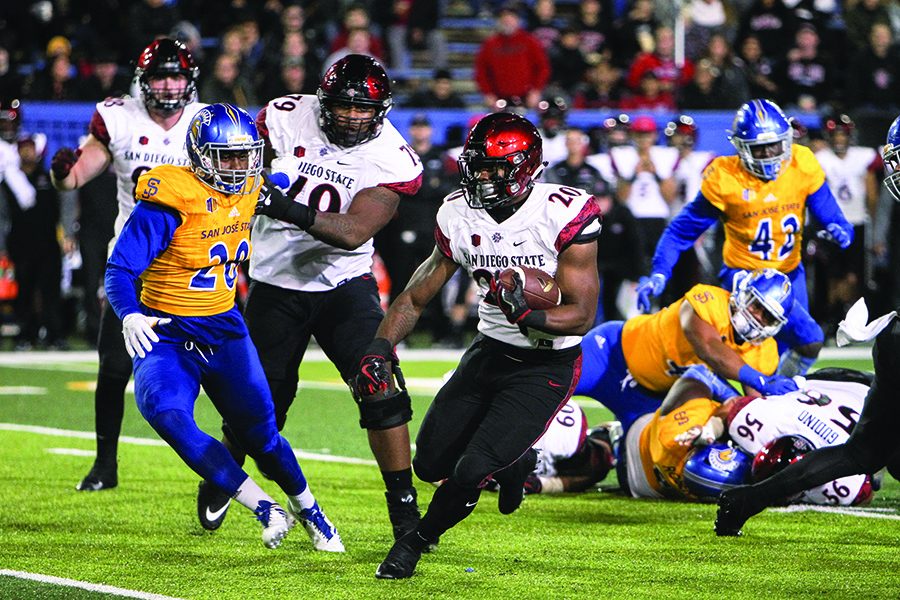 Senior running back Rashaad Penny cuts into the open field on his way to a touchdown in the third quarter of SDSU’s 52-7 win over San Jose State on Nov. 4.

The Aztecs, with their backs against the wall after consecutive losses to Boise State and Fresno State, have since shattered the perceived image of how good this team is after back-to-back blowout victories over University of Hawaii and San Jose State.

As the season enters its final stretch, SDSU is catching fire at the right time.

There haven’t been any major changes to the starting lineup, but the team appears to have refound its early season form.

The million dollar question after these last two dominating victories for SDSU is what has possessed this team to play this well?

“After those two big weeks I felt our confidence level for running the ball was kind of low, so we met as a team sunday and said we have to get our confidence back and find our mojo,” senior running back Rashaad Penny said.

Penny is the feature piece of the Aztecs offense, but as the old saying goes, a running back is only as good as his offensive line.

We’ve seen what this team looks like when the big guys up front seemingly sleep through games, and there was a lot of doubt in the inexperience and health of this line.

These last two games, however, have proved that the offensive line isn’t defined by their mistakes.

If you watch game film from the last two contests, you’ll see a healthy and explosive line that is dominating the line of scrimmage and creating huge running lanes for the endless stream of rushers.

SDSU has left no room for doubt that they can run the rock, and Penny, who leads the nation in rushing yards with 1602, has taken his game to another level.

Penny is in his best form of the season, rushing for 487 yards and five touchdowns in the past two games.

He has not only dominated his opponents on the field, he’s also dominated the majority of headlines regarding SDSU football.

“We talk about our running backs a lot and that’s ok… Rashaad’s as good as anyone in the country,” head coach Rocky Long said following Saturday night’s blowout win.

The Aztecs’ rushing attack is currently 15th in the nation, averaging 247.3 yards per game, and it shows no signs of slowing down.

“Every week we’re getting more and more confidence.. (we) play more together.”

With two games left to play, the Aztecs find themselves a half game behind Fresno for a chance to play in the Mountain West championship game.

It’s anything but guaranteed — Fresno needs to lose two of their three last games, and the Aztecs need to win their last two.