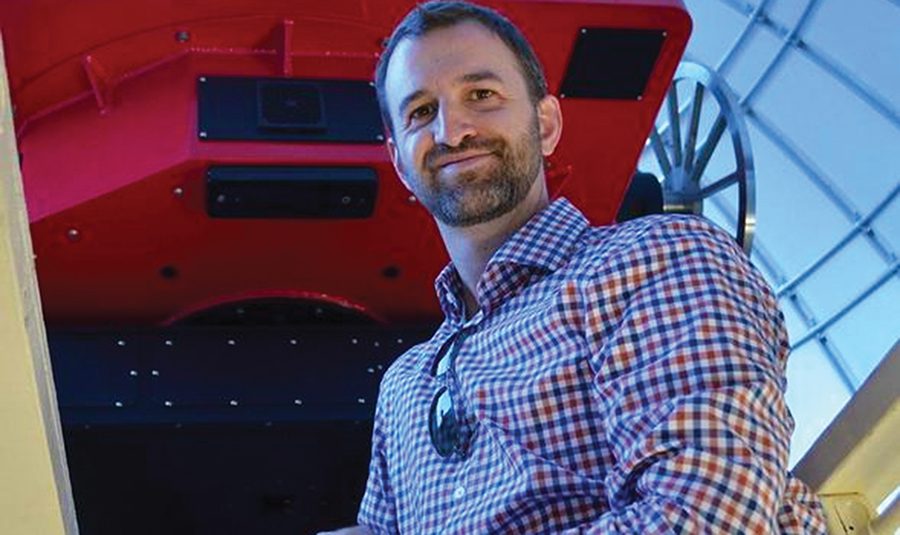 SDSU Astronomy Professor Robert Quimby, who's set to be featured on a KPBS podcast. Photo courtesy of SDSU NewsCenter.

A new podcast from KPBS is set to feature San Diego State astronomer and Mt. Laguna Observatory Director Robert Quimby in an episode.

“The idea is to have it be a character vignette of who they are as people and how they came to be where they are,” said UC San Diego neuroscience doctoral student Margot Wohl, who came up with the idea for the podcast. “Who they are in the lab, but also outside of the lab.”

Every year since 2012, the KPBS Explore Local Content Project has put out a request for proposals, said the station’s programming director, John Decker.

“One of the things that I like so much about ‘Rad Scientist’, and the way Margot approaches it is that she demystifies scientists,” Decker said. “Scientists are just like you and me. They’re just human beings. They just happen to be operating in a field that is hard to understand.”

Wohl’s idea was one of the 182 submissions that KPBS received, Decker said.

“I don’t know how she found out about me,” Quimby said. “She found out that I used to play in in a ska band when I was younger. She heard about that and thought that was interesting and that I would make a good candidate for the program.”

He said he agreed to be featured because he thought “Rad Scientist” was an opportunity to connect with people who don’t get to interact with scientists on a daily basis and may sometimes form false impressions of who scientists are.

“It’s a good program to kind of humanize scientists and let you know that they’re just like you and they do the same kind of things you do,” Quimby said. “I wanted to support that.”

The process of finding which scientists to feature on the “Rad Scientist” podcasts was difficult, Wohl said.

“Because scientists don’t leave a huge internet footprint, it’s hard to know who’s doing what and if they have a story behind that,” Wohl said.

She said she saw a profile of Quimby on an SDSU website.

“(Quimby’s profile) mentioned two things that really caught my attention,” Wohl said. “One is that he played in a band, and actually had to make a decision whether or not to continue being in the band or go to college and study physics.”

She said she thought it would be fun to listen to him describe how he had to make such a decision about his career.

“And then also at one point he discovered what was then the brightest supernova,” said Wohl.  “I wanted to know what that must’ve felt like, because really big discoveries in science are actually kind of rare.”

Decker said while KPBS interviews scientists all the time, it’s usually in an academic way. “Rad Scientist” has a different angle — to tell their stories.

“Often times, it’s hard to connect with a scientist because they’re talking where it is occasionally very hard to understand, and Margot approaches it in a way that that she demystifies scientists,” Decker said.

Wohl said she hopes people from outside the scientific community will be able to relate to and understand scientists through the podcast.

Wohl’s agreement with KPBS only includes six episodes, Decker said. It is unknown whether there will be a second season, but Decker said he hopes they can do more.

“I hope that this will connect San Diego scientists within (their community) and then also outside of the scientific community,” Wohl said.