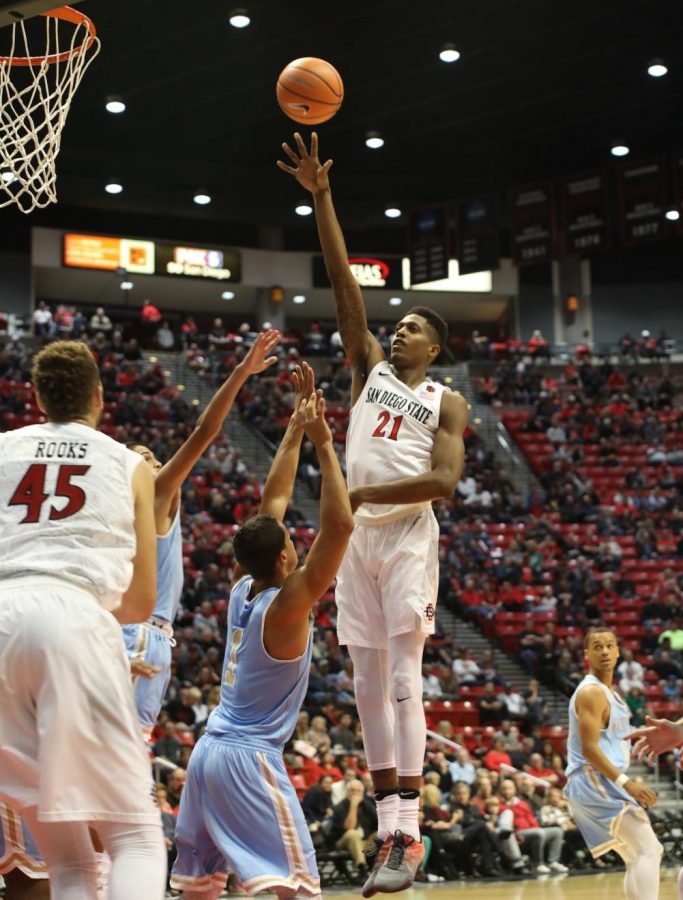 Senior forward Malik Pope puts up a floater in the first half against San Diego Christian. Pope led SDSU with 20 points in the 91-50 win.

Senior forward Malik Pope ran down the floor, catching a perfectly-placed lob from freshman forward Matt Mitchell and slamming it home, taking a 14-0 lead and sending The Show into a frenzy.

Only two minutes and 30 seconds into the Brian Dutcher era, this play set the tone for what would be a dominant 91-52 opening game victory for San Diego State men’s basketball over San Diego Christian.

Filled to the brim with fastbreaks, defensive presses and a find-the-open-man offensive mindset, Dutcher’s Aztecs played with a new attitude that exemplifies the energy that the first-year head coach brings.

“First of all I want to apologize for not scoring 98,” Dutcher said. “That’s what we scored in our first two outings. I thought we played pretty well offensively, the turnovers were a little up, but I thought they were guys playing too unselfish…”

All 12 Aztecs who touched the floor in the dominant victory contributed to the offensive outburst, paced by Pope’s 20-point night.

“We just took advantage of the opportunity and let the game come to us,” Pope said. “It was a fun first game back. We got the jitterbugs out, so it was really fun.”

Dutcher said Pope looked laid back in his approach.

“You never felt like he was forcing him game,” Dutcher said of Pope. “That’s when we’re at our best, when we let the game come to us.”

SDSU shot 32-57 from the floor and 22-31 from the line, making a concerted effort to get the ball to the open man, who most often was open in the paint, leading to 50 points from inside the colored square.

The 91-point outing is the most the Aztecs have scored since they notched 100 against Savannah State on Nov. 28, 2016.

Mitchell was a new addition to the starting five, taking over the spot junior forward Max Montana filled in the Aztecs’ exhibition win over UCSD.

The starting unit jumped out to a 14-0 lead behind eight early points from Pope and a stifling full-court press.

SDSU, with the likes of Rooks, Pope and sophomore forward Nolan Narain, used a significant size advantage – no San Diego Christian player stands above 6-foot-5 – to set the tone early on, attacking the paint and pummeling the Hawks on the glass.

The Aztecs outrebounded the Hawks 44-27.

The second unit, led by junior guard Jeremy Hemsley – who scored 10 points and led the Aztecs with six assists – continued the barrage inside as Narain made three quick buckets.

The 6-foot-10 sophomore scored nine points on 4-4 shooting and grabbed seven rebounds, all career highs. He was one of five Aztecs to score at least nine, joining Montana, Pope, Hemsley and Kell.

SDSU stayed consistent in its attack and did not make a three pointer until freshman forward Jordan Schakel dropped one in with 36 seconds left in the first half to give SDSU a 46-24 lead going into the break.

An 11-13 mark from the free throw line and four made threes kept the pace on for the Aztecs, who coasted in the second half to give Dutcher his first career win.

“I’m only 1-0 but I’m going to try and get that close door scrimmage and that exhibition game on my record,” Dutcher said. “You know I’m 58 years old. I could use all the wins I could get. I’ve only got one so far. So hopefully there will be many more to come.”

Hemsley said the Aztecs were focused on self improvement.

“We were playing against ourselves,” Hemsley said. “No disrespect to the team we just played, but obviously that’s not the level of competition we’re going to play all year. So I think the challenge tonight was making sure we were going to be able to run our sets and we didn’t have as many mental lapses because the competition wasn’t as great.”