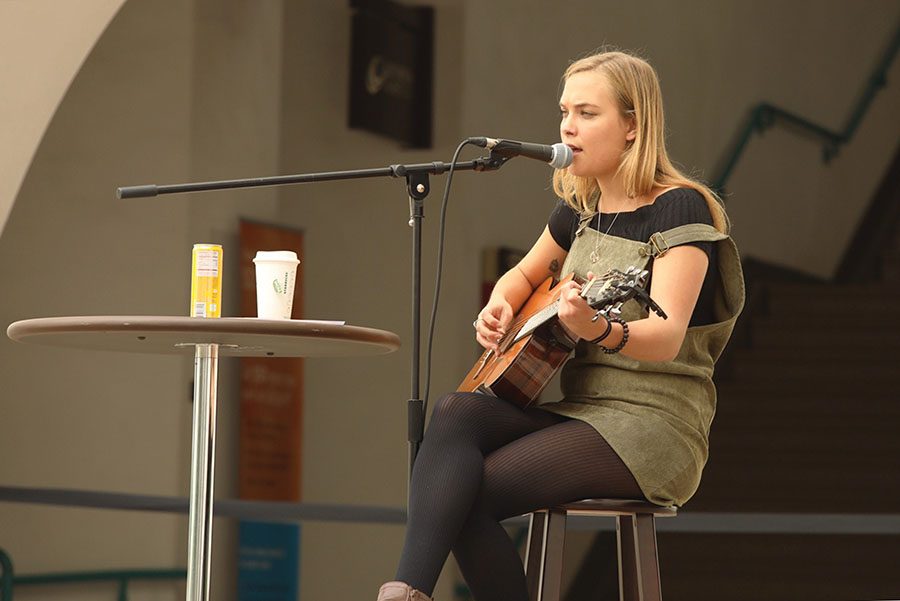 Abby Sage has been hitting a note in the San Diego music scene and is making a name for herself as a student artist to watch at San Diego State.

Sage, a sophomore studying communication, has been surrounded by music her entire life, but found a passion for it as she grew older.

“I first started singing when I was 10 after my dad, who also is a musician, taught me how to play guitar,” Sage said. “Then I started writing my music when I was 14.”

She said her method to writing music is very organic and natural, with each song coming from a short chord progression created in her mind.

“I’ll usually make up a chord progression that I really like and then build the lyrics around that,” she said. “I have to record when practicing it though because I usually forget the lyrics being so lost in the rhythm and the music.”

Sage said she uses GarageBand and a basic mic in her apartment as her studio because it gives the music a more authentic and raw sound.

She tries to set herself apart from other singers to stand out among other up-and-coming artists.

“I feel like I have a very different sound from most artists and I know a lot of people have their music written for them, but I believe it’s more meaningful when it comes from your heart and soul,” Sage said.

Sage is a member of Aztec Music Group and KCR College Radio, where she puts on a weekly show to share her music.

She said collaborating with other musicians around campus has also been helpful in building her exposure to different varieties of music, as well as improving her songwriting and producing skills.

“(Sage) is one of those people that can sing literally anything to you and you’re just mesmerized. You can give her a melody and she can write a masterpiece right in front of you,” international security and conflict resolution sophomore John Halloran said. “She has a crazy amount of potential and I can’t wait to see what she does in the future.”

Sage plans on pursuing music in the future but has been making sure to build her portfolio before committing to the career completely.

“I have been working with other individuals within the music industry, but it’s still in the early stages,” Sage said.

Sage performs regularly on Thursdays at Trilogy Sanctuary in La Jolla, and on Tuesdays and Thursdays at Rebecca’s Coffee Shop.

Her most recent performance on campus was on Nov. 3 at the “Nooner” in the Conrad Prebys Aztec Student Union, an open-mic event for students on campus to show their talents.

To listen to Sage’s music, visit her Soundcloud.