Student DJs battle it out on campus 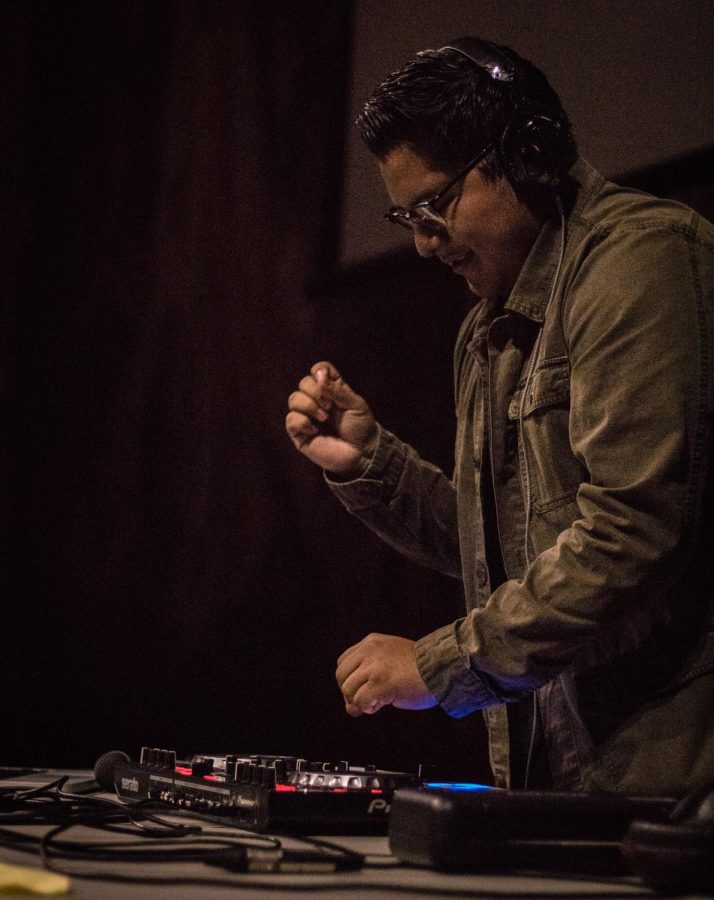 Gustavo Cristobal won the top spot in this year's DJ battle put on by Aztec Music Group on Nov. 9, and will be one of the DJs performing in the February silent disco.

From deep house to old school hip-hop, San Diego State students danced and shuffled to mixes from some of the best DJs on campus as they battled it out for the number one spot and the chance to spin at next semester’s third annual silent disco.

Truman Job is one half of the DJ duo known as JIVE MUSIC whose mixing skills were displayed at the event.

“I think we both probably listen to all genres of music but when it comes to mixing and what not, (we) mostly (play) future bass house music always, but definitely a variety of EDM and rap music,” he said. “So that’s kind of what we’ll be doing today.”

The event was hosted by SDSU’s Aztec Music Group and took place on Nov. 9 inside Montezuma Hall.

Sarah Anderson, a junior double majoring in journalism and political science, was among the attendees that came to watch the DJ’s mix it up.

“I’m working the booth for KCR, but I also have friends DJing, so I wanted to support,” Anderson said.

The competition featured 10 DJs who were selected to compete based on prior mixes they had submitted to the music department back in October.

This competition was judged by four guest judges, each with many years of experience in different facets of the music industry. The criteria these judges based their selections on included the DJ’s music selection, showmanship, originality and crowd response.

Marketing junior Devin Michalec, who goes by the DJ name NIVED, opened the competition with a mix of EDM and hip-hop beats.

“Before this I was just spinning at house parties,” Michalec said.

The first round of this bumpin’ battle showcased all 10 DJ’s who were each given five minutes to get the crowd hyped. Five DJs were then chosen by the competition’s four guest judges to move on to the second round where they were given another five minutes each to display their musical mixing talents.

Finally, two DJs were selected by the judges to duke it out in a climactic head to head round where they were allowed 10 minutes each to wow the crowd and steal the title of SDSU’s number one DJ.

Ultimately, it was journalism junior Gustavo Cristobal who impressed the judges and was named champion. Cristobal won the competition by stringing a slew of trap, EDM and hip-hop beats together in the first and second rounds and then, in the final 10 minute round, he used a mixture of electro and Melbourne bounce beats with a couple of mashups including some classic old school hits like “Be Faithful” by Fatman Scoop.

Cristobal has been mixing music for three years.

Because he earned the top spot at this local DJ battle, he will be spinning his mixes at the Aztec Music Group’s third annual silent disco that takes place in February next semester.

The silent disco is the Aztec Music Group’s largest event and attracted over 500 attendees last year.