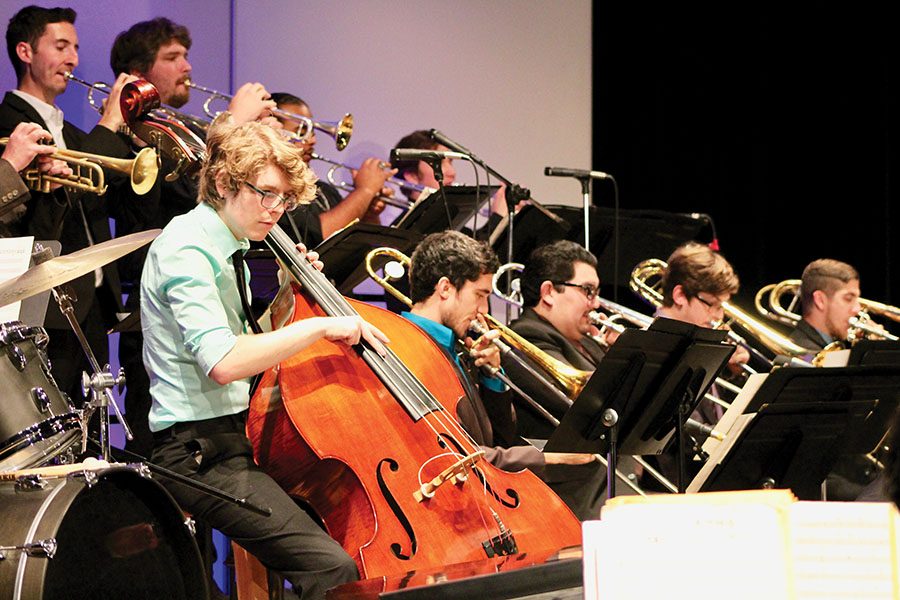 The San Diego State Jazz Ensemble dedicated its Nov. 7 concert to late alumnus Pitt Warner after it was announced in late October that the longtime jazz musician left a $750,000 endowment to the Jazz Studies program at the School of Music and Dance.

The Pitt and Virginia Warner Jazz Studies Endowment will support the Jazz Studies program and its students by providing funds that include scholarships, travel, equipment, conference and musical festival attendance, music commissions, music purchases, guests artists and clinicians, according to Director of Jazz Studies Bill Yeager.

Warner, who died in 2016, was a renowned jazz drummer who not only played on SDSU’s jazz ensemble for many years, but also performed with many other bands, including local Latin jazz group The Bordermen.

Jazz ensemble drummer and SDSU graduate student Justin Joyce became acquainted with Warner through the Jazz Studies program and said he said he thinks that Warner’s gift was an amazing contribution to the music department because of massive funding cuts that arts programs have taken in recent years.

“The music departments are folding, like all the way ,going down to elementary school and it resonates coming up to the top too,” Joyce said. “I mean, it’s like (the business college) would get something like $3 million and us, we’ll get like $28,000… So it’s a great thing that he left it to us.”

“He left so much gear for us, and , as a drummer, I’m very thankful, but as a musician I’m even more thankful,” Joyce said. “He was a great guy, a great musician.”

Music entrepreneurship and business freshman Derrick Kennedy Martin Jr. said he thinks that the endowment will give great opportunities for music students, especially when it comes to the possibility of traveling and experiencing different musical styles and cultures.

“It provides us with opportunities that we wouldn’t otherwise be able to have as jazz students,” Martin Jr. said. “(The endowment) has the potential to provide us with different countries to be able to play with where you get different styles of music and styles of people and it’s just a great cultural experience from all types of musicians and people.”

Along with Warner’s endowment, the Jazz Studies also has Eugene and Barbara Bowman Endowment Fund, worth $150,000, which was awarded to the department two years ago.

The endowment was Warner’s second gift to the university. After his wife Virginia, an SDSU alumna with a degree in English, died in 2012 he gave a donation for the Pitt and Virginia Warner Suite in the Department of English and Comparative Literature.