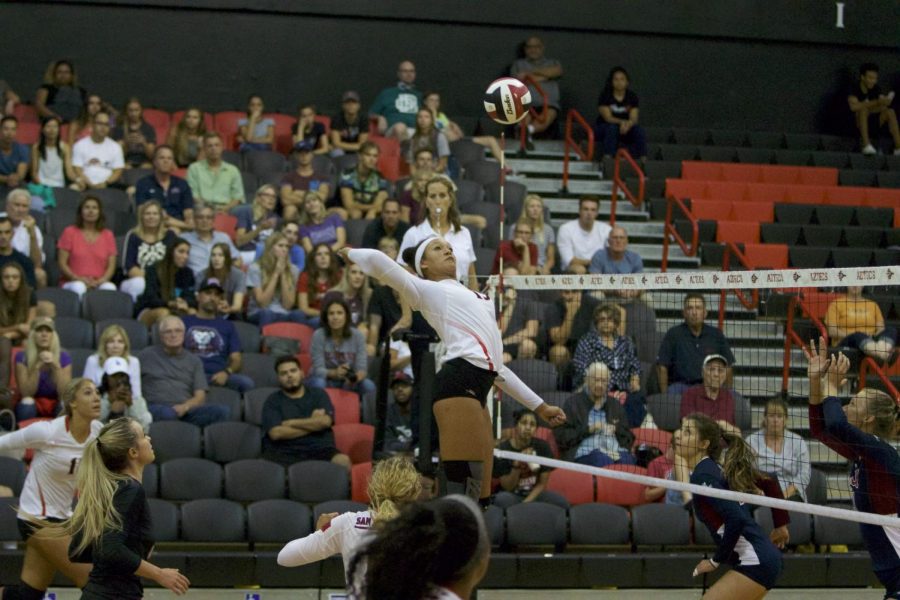 Senior outside hitter Deja Harris readies for a spike during SDSU's loss to Loyola Marymount on Sept. 8.

Against UNLV freshman setter Gabi Peoples recorded her third double-double of the season to go along with a match high 51 assists.

Senior middle blocker Baylee Little notched her highest career hitting percentage at .857 with 12 kills and two errors in 14 attempts while senior libero Devyn Pritchard anchored the back row with a match high 26 digs.

Peoples also acknowledged the importance of contribution that doesn’t show up on the stat sheet.

“(Sophomore outside hitter) Ashlynn Dunbar had a really strong game for us. She not only helped our offense a ton but her defense was incredible,” said Peoples, “I think she had one of her best passing games so far this season.”

The beginning of the first set remained close, thanks to multiple SDSU service errors. However, by the middle of the set SDSU found some separation, forcing a UNLV timeout at 17-11.

Prior to the timeout, junior outside hitter Alexis Cage pancake sprawled to save a ball off of a wayward dig, and Pritchard sent a flinging free ball over the net to allow a junior middle blocker Deja Harris block to seal point 16. From there on SDSU continued to push the throttle, taking the set 25-18.

The second set was back and forth in the beginning, with many long rallies and scrappy plays from both teams.

The UNLV block proved to be a challenge for the Scarlet and Black, with the Aztecs trying to be creative with shots and different play calls to get around it. SDSU took a timeout at 11-16 and 15-22, but were unable to stage a comeback.

It was SDSU who came out of halftime with the early lead in the second set, with an emphatic Little block to put the Aztecs up 5-2.

The SDSU offense continued to overpower the Rebels, putting SDSU on top 11-5. Point 14 featured a scrappy rally, with sophomore outside Dunbar saving the point by spiking the ball over the net and Harris finishing the point with a kill. SDSU continued to build on the lead and took the set in convincing fashion at 25-12.

However, it was UNLV out to a quick start in the fourth set, getting out to an early 4-1 lead. The Aztecs were quick to catch up, tying the game up at 10-10 and taking command of the lead for the rest of the game.

UNLV took a timeout at 15-11, but it was Cage with a big solo block out of the timeout to squash any momentum the Rebels had left. Peoples followed up Cage’s block with a service ace on the point after, and Little followed with an emphatic kill on an overpass to secure point 18. The Aztecs clinched the match with a 25-13 fourth set win.

On Saturday, the Aztecs rallied for a win against UNM with offensive production from many hitters. Harris led the way with 15 kills, while Dunbar, Little, and Cage had 14, 12, and 10 kills respectively. Cage notched her sixth double-double of the season by pairing her ten kills with 12 digs from the back row.

“Having so many hitting options makes our life a lot easier and the opposing team’s life a lot tougher,” Peoples said. “Having a spread offense makes blocking more of a guessing game for the other team, leaving our hitters one on one at times.”

The opening set was a back and forth fight with seven ties and two lead changes, but it was the Lobos who found themselves with the upper hand towards the end of the set. UNM ultimately won the first set 25-20 to put them up 1-0.

Things were not looking good for the Aztecs in the second stanza when they found themselves down 21-14.

However, the Aztecs staged a successful comeback with a 12-3 run to steal the set. After a Peoples’ kill on a dump the Aztecs pulled to within one point down 23-22, but after an Aztec attacking error on the next play the Lobos gained set point. Not done yet though, SDSU fought back to earn the next four points and take the set 26-24.

“I think we all looked at each other and started making the choice to win,” Peoples said. “And once we did that the match became a battle and each point was a sense of urgency. It for sure set the momentum for the rest of the match.”

Coming out of the locker room it was all SDSU the next two sets, out hitting UNM 27 kills to 17, and outblocking the visitors 11-3.

The Aztecs got out to an early 10-2 lead in the third set and never looked back, completing the season sweep of UNM.

The Aztecs return to the court on Wednesday to battle at the University Wyoming in their second-to-last regular season match.