Families share tears, hugs and words in ‘Opening the Door of Hope’ event at Friendship Park 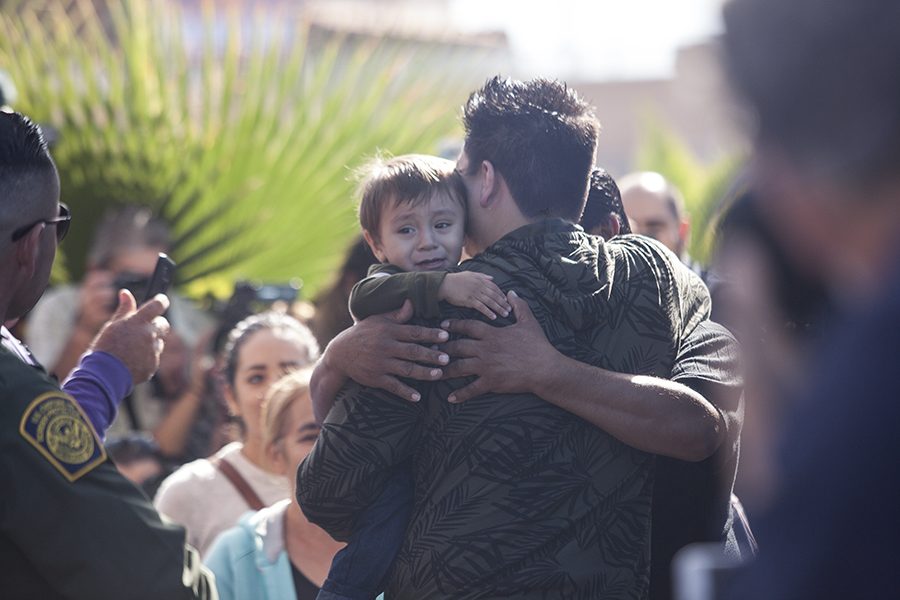 Twelve families had the opportunity to reunite with family members after years of being apart on Nov. 18 at Friendship Park.

by Jocelyn Moran and Marcela Camargo

Tears were shared on both sides of the border as 12 families met and reunited with loved ones on Nov. 18 at Friendship Park in Border Angels’ “Opening the Door of Hope” event.

Each family had three minutes to hug and speak with their relatives. One couple used their time to exchange wedding rings.

Brian Houston walked in a gray suit toward the fence to meet with his bride Evelia Reyes, who wore a long white dress and white veil on her head.

Border Angels Director Enrique Morones said they were not expecting a wedding, but he is glad it could happen.

“It’s the matrimony most short in history, I think, of three minutes, but it’s a matrimony,” Morones said. “We are so happy that Evelia Reyes is (now) Evelia Houston.”

Morones said in order for families to have the opportunity to meet with their relatives, they must go through an application process. The State Department ultimately chooses which ones will be able to participate.

Brian Houston said he and Evelia Houston were together for almost two years before they were separated.

“I think this is an unbelievable opportunity,” Brian Houston said. “I’m very grateful for everyone who made this possible.”

This was the sixth time the fence has been opened since 2013 for families to meet.

Morones said this event has grown from having one family meet for two minutes to 12 families meeting for three minutes each.

“We like to promote the fact that love has no borders, and what better way than going and hugging your loved ones?” Morones said. “In many cases, children were meeting their grandparents for the first time. It’s such a moving event. There’s a lot of joy but a lot of sadness.”

Rosa Mariscal reunited with her son, who was deported four years ago.

“I cannot describe the emotions because I was so anxious to see him,” Mariscal said.

Rocio Lopez, a student at San Diego City College, saw her grandfather for the first time in 12 years.

“I told him I missed him, and that I love him a lot,” Lopez said. “We hugged, we cried, and he told me to take care of my parents and siblings.”

Rocio’s grandfather waved toward the crowd of people, where his other granddaughters he hadn’t seen in over a decade were.

Morones was at the fence as each family met, letting them know when their three minutes were up.

“In a lot of ways, I had the hardest job,” he said. “They would tell each other things that would rip your heart like ‘mijita, I’ve been wanting to hug you.’”

Morones said Nov. 18 was chosen because International Children’s Day is on Nov. 20 and Friendship Park is only open on weekends.

Border Community Liaison Agent Saul Rocha said this was his third time partaking in the “Opening the Door of Hope” event.

“Our chief, Rodney Scott, is very committed to enhancing our relationship with the community, and this is one way to have the community gather and know a little bit more about the Border Patrol and actually approach the border,” Rocha said.

Morones said for next year, he hopes to hold the same event at the end of March, on April 30 because of Children’s Day in Mexico and again in November.

“Some people say they want to build more walls,” Morones said. “In Border Angels, we say we want to open more doors. Love has no borders.”

Link to all photos of “Opening the Door of Hope” by Kelly Smiley: https://kellysmiley.passgallery.com/-openingthedoorofhope/gallery