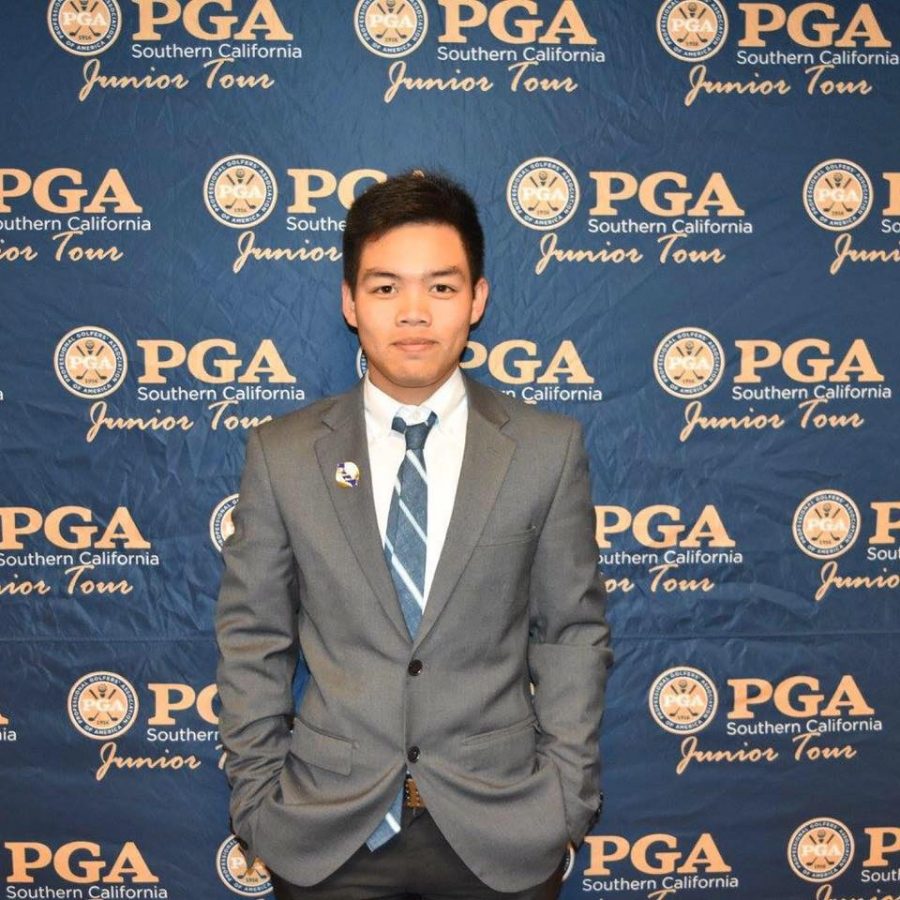 He said he has played golf for more than half of his life.

Anupansuebsai’s journey to success required many sacrifices. He departed from his entire family in Thailand around the age of 15.

He ended up with a host family in Anaheim, where he attended Anaheim Discovery Christian High School and played golf.

“I wanted to come to college here in America,” he said. “If I stayed in Thailand, I think I’d have a less chance of coming here.”

Anupansuebsai said going to school was pretty tough at first. He could barely speak English, and after getting so used to having his parents around all his life, he didn’t really feel like he had anyone to help him.

The creation of the golf team during Anupansuebsai’s senior year in high school helped him find his way and enjoy what was left of his high school experience.

He said his team was co-ed with five males and one female, compared to other teams that had more than 10 males.

His team got second in state during his senior year, and that was the first year of the school’s golf team.

After keeping up with Anupansuebsai’s early golf career, Donovan said that Anupansuebsai was a perfect fit for the Aztecs.

“He was always talking about San Diego State, he really wanted to be an Aztec,” Donovan said. “He took a lot of pride in that. I like that about a kid because no matter what he does here, he’ll always be an Aztec for life. And I think that’s something the university has stressed on us to find those kinds of people. He’s going to be a true component to our success this year.”

Anupansuebsai is the only freshman who started in the first three tournaments this season, and has really helped the Aztecs overall.

“It (being able to play in the starting line) makes me feel good,” he said. “I worked hard in the summer when I went back to Thailand, and it paid off when I came here.”

After participating in the first three tournaments of the season, Anupansuebsai didn’t travel with the team during its most recent tournament in Hawaii because he didn’t qualify.

“I have to fix some things on my swing right now,” he said. “I didn’t play well in the last qualifier. I have to sit this one out.”

Senior Blake Abercrombie said what Anupansuebsai is going through is common, and that everyone goes through it at some point.

“Everyone has gone through it so you just have to keep practicing,” he said. “For me, that was the hardest part because you always feel like ‘oh why is it happening to me?’ but then it happens to everybody on the team at one point. It makes you better at the end, I think. The environment on our team is very competitive and it pushes you to get better that way you don’t get comfortable.”

Donovan agreed and said his job is to utilize the best players.

“I think that’s been a part of our success,” he said. “I love everybody on our team but we go through a pretty challenging qualifying system amongst the guys to travel, and if a guy doesn’t step up and play to his ability, my goal is to put the best product out every week.”

Anupansuebsai said he has been visiting the range and hitting a lot of balls in preparation for the rest of the season.

He said he is keeping his head up throughout this bump in the road.

“You have to work hard, you have to be patient,” he said. “Golf is not always good. It’s going up and down. It’s hard. You struggle sometimes, sometimes you play good. I look forward to more tournaments.”

Donovan said he believes in him.

“I know he can play, so I’m not worried about that,” he said.

With players coming from all over the world, Donovan said that team chemistry is something that he really focuses on.

“Trying to make everyone comfortable and be themselves is also really important,” he said. “I think just more less respecting each other, since everyone does come from a different story.”

Norby couldn’t imagine coming from a brand new country where English is your second language.

Abercrombie said he and the team are understanding of one another.

“I think because we usually have a lot of people coming from different countries that come play golf here, you just have to be super patient with them,” he said. “They’re used to things differently so we all kind of understand our different cultures. We’re all just patient with each other.”

Abercrombie said what stands out to him is Anupansuebsai’s confidence.

“He’s a little guy but he carries himself very confidently,” he said. “Which is a good thing.”

“He’s just really funny,” he said. “He’s always joking around and trying to have a good time. He puts a positive spin on things.”

Norby said Anupansuebsai’s size has little to do with his athletic ability.

Norby and Abercrombie are impressed with Anupansuebsai thus far, and excited for what his future holds.

“He’s doing a really good job, especially adapting,” Norby said. “He’s shown what he’s capable of, so he has a lot of potential. He has a big uprise for him here in San Diego.”

“It’ll be fun to see what he’s able to do in the next three and a half years,” Abercrombie said. “He can go quite a ways. He could be a real leader in a couple years.”