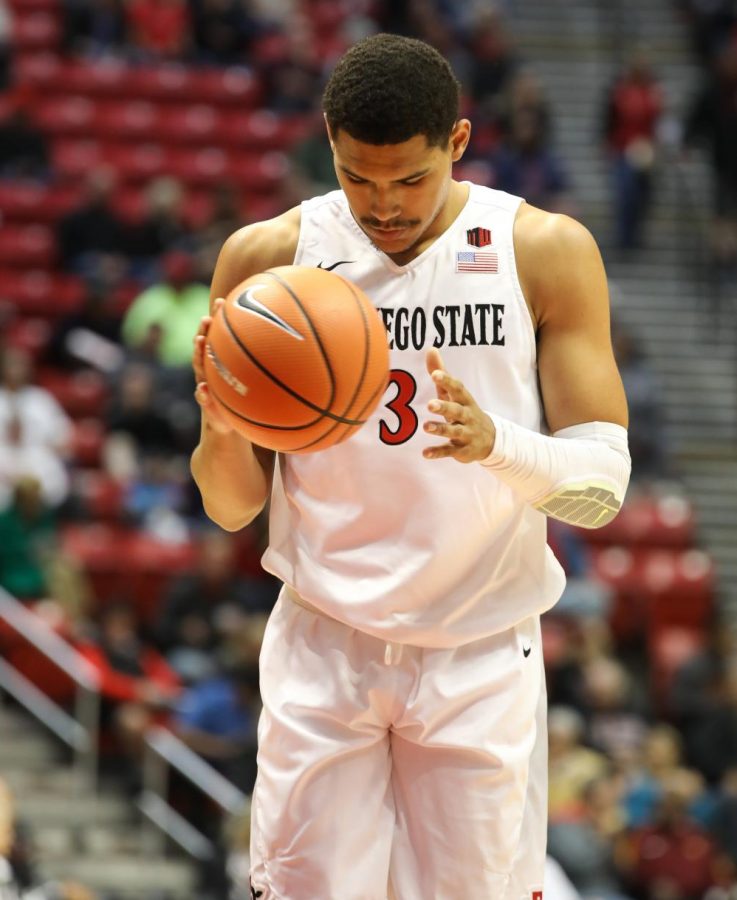 Senior guard Trey Kell prepares for a free throw during the Aztecs 91-52 win over San Diego Christian on Nov. 10 at Viejas Arena.

San Diego State men’s basketball appeared on its way to becoming the first school to win two Wooden Legacy championships on Sunday night in Fullerton before senior guard Trey Kell crumpled to the court grabbing his right ankle with under seven minutes to play.

SDSU was already missing senior forward Malik Pope, who hurt his ankle early in the game and sat out the entire second half, and saw its 75-70 lead quickly evaporate against Washington State University, which went on a 23-11 run to win the game, 93-86, and claim the school’s first-ever Wooden Legacy Championship.

The Aztecs made only one of their final eight field goal attempts, and while Kell came back in the game following the under-four-minute media timeout, he was noticeably hobbled and missed all three shots he took upon his return.

“College basketball is hard enough to win itself, you gotta have your players healthy,” Dutcher said.

Kell finished the game with 19 points, 13 of which came in the first half while exchanging shots with Cougars sophomore guard Malachi Flynn, who led all scorers with 24 points to go along with seven rebounds and six assists.

Flynn was named the tournament’s Most Outstanding Player, two nights after his 26 points led the Cougars to an 84-79 semifinal victory over Saint Mary’s.

“I think it’s a huge statement but we’re definitely not done yet,” Flynn said about the win. “It’s a long season, we have 20-plus games ahead so we still got a lot to prove.”

Playing without Pope, the Aztecs leading scorer (14) and rebounder (eight) coming into the game, SDSU junior guard Devin Watson took on a bigger role for the Aztecs, scoring 15 of his team-leading 23 points in the second half.

“I feel like we fought hard,” Watson said. “We lost Trey Kell at the end and it caused us to speed up and play a little fast. It’s disappointing and we knew we should’ve won that game but things happen.”

Watson pitched in six assists and four rebounds and appeared to give the Aztecs momentum with his alley-oop assist on sophomore forward Nolan Narain’s dunk for a 67-59 lead with 9:31 to play.

The game was back-and-forth from the very beginning, with 14 total lead changes as the team’s exchanged runs without being able to pull too far ahead.

While the Aztecs struggled from long-distance, shooting only 27 percent, WSU shot lights-out from behind the arc, connecting on 13 of 28 three-point attempts, including six of 11 from Flynn.

Flynn hit back-to-back three-pointers to give WSU a 46-43 lead going into the half, and seven of the Cougars final 10 field goals going into the break came from behind the arc.

WSU junior forward Robert Franks finished second on the team with 22 points and appeared to roll his ankle after coming down on Aztecs freshman forward Matt Mitchell’s foot with 12:59 left to play.

Franks left the court but came back after a short absence, and helped secure the victory from the free-throw line, where he went seven-for-seven in the game.

“When I saw him get up and limp off I was hoping he would be back,” WSU head coach Ernie Kent said. “To get that tap on your shoulder a couple minutes later saying ‘coach I’m ready to go,’ it was really good because that’s a turning moment for him.”

The Cougars shot 22 for 25 as a team from the charity stripe, including 14 of 15 in the second half.

SDSU was the clear aggressor on the glass, and outrebounded the Cougars 44 to 35, including 18 to eight on the offensive end, resulting in a second-chance points advantage of 18 to seven.

WSU came out cold in the second half, shooting just 5 of 18 to start, but caught fire and made nine of its final 14 shots.

Following Kell’s injury, the Cougars tied the game at 75 on a three-pointer by junior guard Viont’e Daniels with 5:25 to play.

Late buckets by Watson and Narain kept SDSU in it, and the team got to within 89-86 after a Mitchell free throw with 21 seconds to play, but free throws from Franks and sophomore guard Carter Skaggs sealed the win for the Cougars.

The Aztecs were trying to come away with their third victory in four nights at the Titan Gym, after defeating Sacramento State University by a score of 89-52 in the quarterfinals on Thursday, and the University of Georgia by a score of 75-68 on Friday.

Next up for SDSU is a Nov. 30 date with undefeated local rival University of San Diego (5-0) at the Jenny Craig Pavilion.