Aztecs cruise to 75-52 victory over Bradley 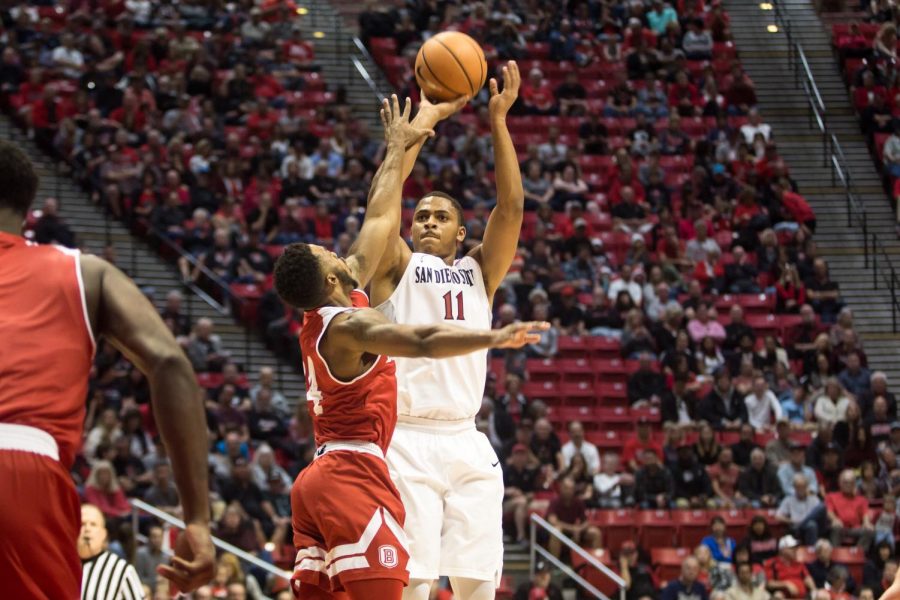 Freshman forward Matt Mitchell rises for a jump shot over a Bradley defender during SDSUs 75-52 win over the Braves on Dec. 3

If the San Diego State men’s basketball team was playing with tired legs on Sunday afternoon, it certainly did not show.

The Aztecs (7-2), playing in their fifth game in 11 days, made quick work of the visiting Bradley University, jumping out to a big lead and never trailing during a 75-52 victory at Viejas Arena.

Bradley (7-2) came in boasting a 7-1 record but fell behind by as many as 29 points against the Scarlet and Black.

“I’m happy with our performance tonight, (the) fifth game in 11 days that’s always a challenge,” SDSU head coach Brian Dutcher said. “We’ve been playing a lot of games, but I thought our kids competed at a high level today.”

SDSU shot 44 percent from the field in the game – compared to 33 percent for the Braves – and outrebounded Bradley, 46-24.

“We defended well, we rebounded well, and that usually leads to a good outcome,” Dutcher said.

The Aztecs were led on offense by redshirt freshman forward Jalen McDaniels, who finished with a game-high 14 points and 12 rebounds.

“I just used my quickness to try to get around them and it just works,” McDaniels said.

SDSU did not appear bothered by the absence of senior guard Trey Kell, the team’s second-leading scorer, who missed his second straight game with an ankle injury.

“He lets me know if he can play or not. I know he’s tough, so I know he wouldn’t refuse me if I said, ‘I want you to be ready to go in case I need you’,” Dutcher said. “He’s close, but he’s not 100 percent. It’s a luxury for me to have such a good bench where I didn’t have to put him out there.”

Pope came out hot in the second half, scoring 11 of his 13 points after the break.

“I tried to do what I could in the second half to make up for lost time, do what I can to help the team,” Pope said.

The Aztecs built a 22-3 lead to begin the game and led by as many as 22 points in the first half after junior guard Devin Watson hit a three-pointer to give the Aztecs a 27-5 lead with 8:23 to go before the break.

Watson finished with nine points in 34 minutes, three days after scoring 26 points and playing all 40 minutes in the Aztecs’ 66-57 victory over the University of San Diego.

Bradley was able to cut the Aztecs lead to 37-23 going into halftime, thanks to sophomore guard Darrell Brown’s eight points during an 8-3 run to end the first half.

Brown led the Braves with 10 points at the break, but scored only two points in nine minutes in the second half, after he was forced to sit down following two personal fouls in the first two minutes.

Bradley shot only 33 percent in the first half, and its shooting woes continued after halftime, with the team missing its first four shots during an 8-0 SDSU run coming out of the break.

“Give (SDSU) a lot of credit,” Bradley head coach Brian Wardle said. “They’re good. They’re big, they’re long. They’re physical and they play physical without fouling. It’s what we’re trying to get to. We have to get a lot tougher and a lot better.”

SDSU’s next game is on Dec. 9 against the University of California, Berkeley, as the team looks to remain undefeated at Viejas Arena.