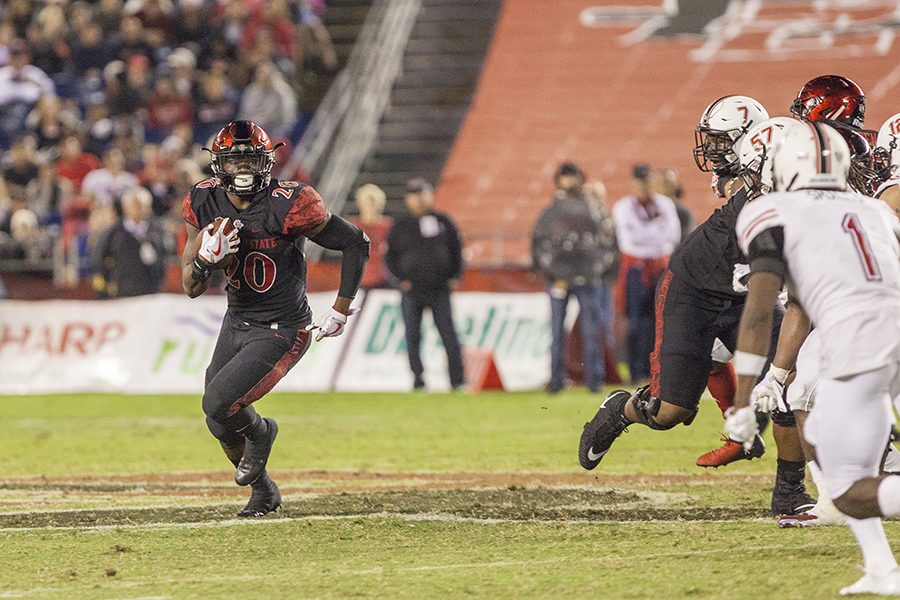 Senior running back Rashaad Penny stretches to the outside on a run during SDSU's 34-28 win over Northern Illinois on Sept. 30.

At the end of September, emotions and expectations were high.

Coming out of its exciting upset win over the Stanford Cardinal on Sept. 16, SDSU jumped into the AP Top 25 at No. 22. Another impressive win against Northern Illinois saw the Aztecs reach No. 19, their highest ranking since the 70’s.

Many residents of San Diego, including myself, were confident this would be the year football would be playing in the next year in a New Year’s Six Bowl.

However, it doesn’t mean that all is lost.

While many may be disappointed by the admittedly underwhelming assignment, there’s still an opportunity to showcase what the premier sports team in San Diego is capable of.

Army also poses an intriguing matchup for the Aztecs.

Namely, the Scarlet and Black will be facing something of a mirror of themselves on Dec. 23.

SDSU prides itself on a dominant rushing attack complemented by a strong defense on the ground and in the air.

The Black Knights have an even deadlier ground game in place – they lead the FBS with 368.1 rushing yards per game.

Compare that to the Aztecs, who are twelfth with 252.3 yards per game.

If you like the physicality and viciousness that comes with the run game then this bowl is for you.

While they may be at the top of rushing offense, they’re found at rock bottom when it comes to passing. Particularly, they’re dead last in passing yards (335), pass touchdowns (two), and passing yards per game (30.5).

The matchup does nothing to undermine the success of the team once again achieved this year too.

Penny is still going to be the main attraction, and SDSU fans should still savor the fact that they get at least one more opportunity to watch the future NFL star suit up in the Scarlet and Black one more time.

It’ll be entertaining to see what he can do against a Black Knights defense that has allowed 154.3 rushing yards per game.

In games against the three teams ranked higher than that, Penny has struggled in losses against Boise State and Fresno State where he rushed for just 53 and 69 yards respectively, while he was much better against the win against Northern Illinois(107 yards).

The contest will be the ninth bowl game in a row for the Men on Mesa, showing a remarkable consistency for one of the top two teams in the Mountain West Conference over the last decade.

The last two seasons have definitely put the football program on display for the rest of the country.

Before Pumphrey and Penny blossomed into stars, it hadn’t been since the days of Marshall Faulk and LaDainian Tomlinson that America’s Finest City was recognized for its football prowess.

As disheartening as the selection may appear, it doesn’t take away from any of the Aztecs’ recent accomplishments.

If anything, it’s just another stage for Penny and the rest of Long’s squad to showcase the talent that propelled them to such a high ranking this year.