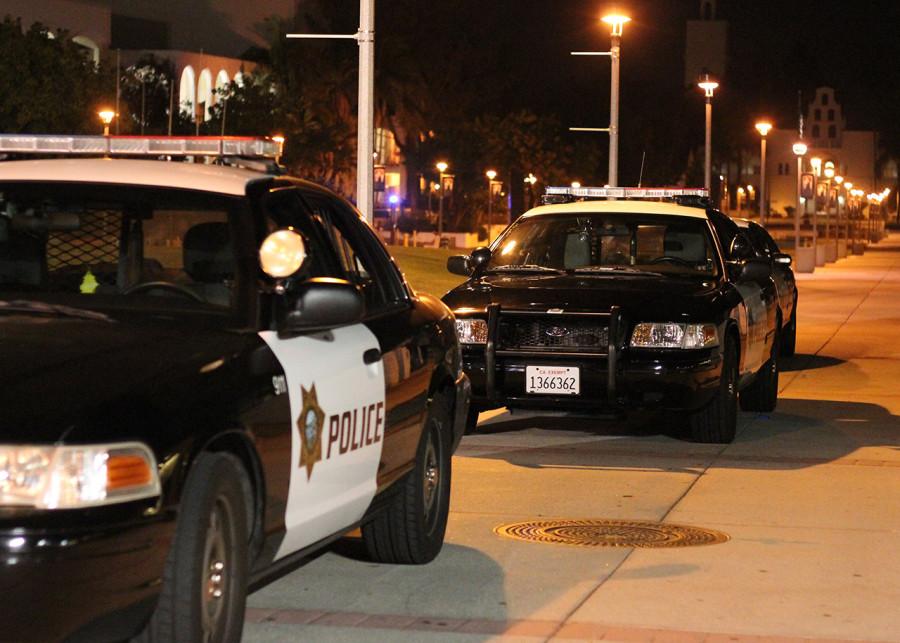 Just before 6:10 p.m. on Nov. 22, a non-SDSU student was arrested at the MTS Transit Center and taken to county jail for public intoxication after punching a bus passenger.

At about 11:15 a.m. on Nov. 24, police were informed of a break-in at Albert’s College Apartments. Officers were told a bathroom window was broken, belongings were scattered and a threatening message was left on a laptop.

At about 10 a.m. on Nov. 28, a Tarastec Residence Hall apartment was reported broken into through kitchen window, and a backpack and wallet were reported stolen.

Officers were called to the Conrad Prebys Aztec Student Union at about 3 p.m. Nov. 24 after a non-SDSU student allegedly assaulted a man and stole his computing equipment. The man was arrested and taken to county jail on suspicion of robbery, conspiracy to commit a crime, battery, and grand theft.

Around 11:20 a.m. on Nov. 22, a non-SDSU student was arrested and taken to county jail for illegal lodging after he was found sleeping behind the Professional Studies and Fine Arts building.

A non-SDSU student was found sleeping in the garage of Calpulli Center at about 8:30 p.m. Nov. 27. He was cited and released for illegal lodging on school grounds and given an order to stay off campus.

Various computer equipment and clothing items were reported stolen from a room in Student Services East. The thefts were believed to have occurred sometime between Nov. 17 and Nov. 28.

An SDSU student was cited for theft of headphones from the SDSU Bookstore just after 1:15 p.m. on Nov. 21.

A bicycle was reported stolen from Chapultepec residence hall. The theft was believed to have occurred between Nov. 21 and Nov. 27.

An SDSU student was cited for petty theft of Apple earphones from the SDSU Bookstore at about 6:20 p.m. on Nov. 28.