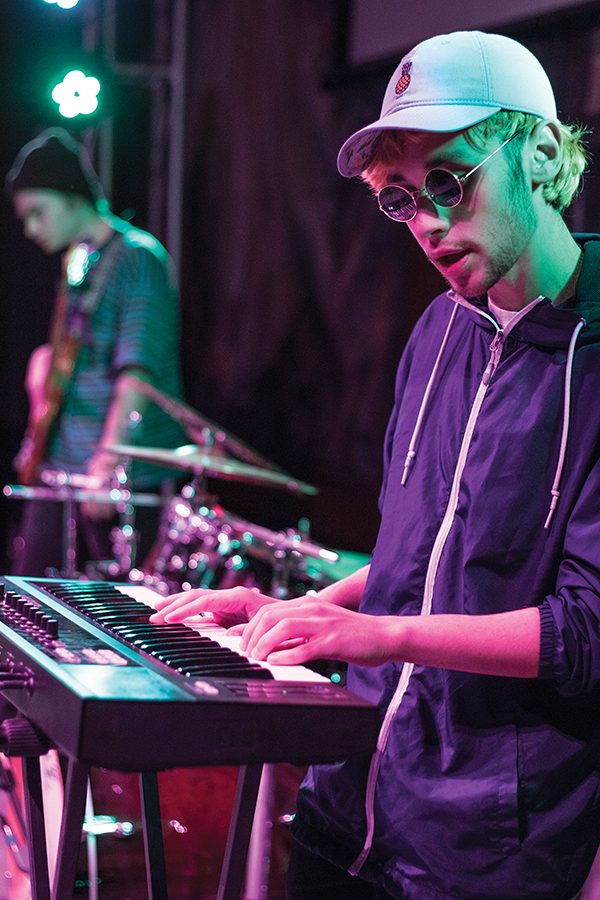 One of Jackson Dean's backup musicians accompanies the R&B singer.

This years Battle of the Bands proved once again how talented the students of San Diego State are. The event, hosted by GreenFest, promoted sustainability and going green.

The winner of the show walked away with something more special than a trophy, a chance to open for the GreenFest concert headliner.

The show kicked off with The Abstracts, an indie rock band, who opened with its song “Girls.” The band played four more up-beat songs that made any listener want to pack up and go to the beach.

The second performers were Colly & Whomptie, a San Diego based rap duo, who brought energy to the stage and the audience.

“We like to get crazy, we like to have a good time, we want to see you guys jumping,” Colly yelled to the crowd before the music began.

The two danced around the stage throughout their entire performance as they performed their original songs “Gucci Snakes” and “Shawty Wanna.”

The event featured tabeling from other music organizations on campus like Aztec Music Group and more. In addition, the mediterranean restaurant Luna Grill was catered and all utensils were made from recycled materials.

As stages switched, so did the mood with the third performer Jackson Dean.

Jackson’s R&B music caused the whole audience to be in a daze. The performance included background saxophones with keyboard accompaniment.

Before concluding his performance, the musician called out to the crowd for a topic to freestyle. Someone in the audience yelled “Starbucks,” which followed with a 30-second improvised song about cold brew coffee.

Ki, a solo rapper, took the stage in his bright orange jacket and brought the audience to complete silence when he sang his final verse without any music.

The verse was about racism in society and the personal struggles he goes through everyday.

“Do me a favor and stop hating on my permanent tan,” he rapped.

The fifth performers, Village Park, wooed the audience with catchy original tunes and a Killers cover of the song “Mr.Brightside.” The band filled the room with energy as they sang their song “Way Down.”

The next performer, D.Sel, has performed his soulful music at Battle of the Bands three times now.

The final performance by Sonner Collective left the crowd vibing with its reggae-like sounds. The group performed multiple original songs as well as a Red Hot Chili Peppers cover that was a crowd pleaser.

After all seven performances, D.Sel walked away victorious with a first place win, and Jackson Dean and Village Park following close after.

“Honestly it doesn’t feel real like I told you guys during the show, this is my third year doing it and each year I laid my heart on the line and it wasn’t good enough,” the rapper said. “I walked past open air theatre every single day and I told myself, ‘I got to perform there before I graduate.’”

D.Sel will get to open up for the GreenFest concert in the spring and Jackson Dean and Village Park will be playing at GreenFest during the day.

All of the artists can be found on Soundcloud or Spotify.