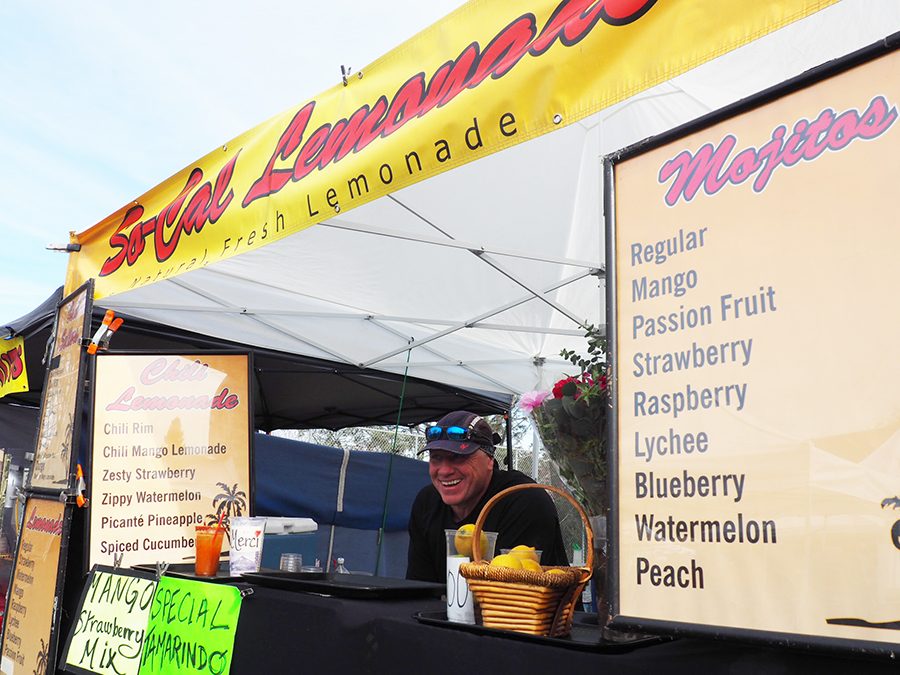 Over the summer I got a job at a bakery and cafe, selling bread and working as a barista. The bakery has been around since 1988, from the days when a good old man named Charlie would present his perfected bread recipes with pride out of his little hole-in-the wall in Pacific Beach. After three decades, the ownership’s changed, and the store has tripled in size now. The majority of patrons are ones who have been coming since the old days and remember when the bakery was barely large enough to hold its oven.

On Sundays I take our bread and pastries to the farmer’s market in La Jolla. Compared to the incredible vendors introducing colorful flavors, spices and experiences to the world, my bread stand is humble and quiet. But the real joy is the people I work with.

Dec. 10 was my last day working at the farmer’s market before I leave work to prepare for my semester abroad. Over the months I’ve formed relationships with fellow vendors who I’ve come to cherish. These people have the decades of life experience and outlook that I can only one day dream of having. Upon the farewells, I collected a little bit of wisdom from a few of my friends to share.

Jean-Michel runs the lemonade stand. He’s from a little town in the south of France, and his lemonade is pretty phenomenal. Also, he’s tremendously generous. Throughout the morning, Jean-Michel trots around to various stands, dropping off everyone’s favorite flavor, catching up on life, flirting with everyone. Sometimes he’ll spend so much time frolicking around the market, delivering lemonade, trading for goods, he’ll have a line of people at his stand for a good few minutes.

After someone finally shouts, “Hey, you have customers!” he’ll trot back, with a big smile on his face, having traded lemonade for a massive bouquet of flowers, plop them in a vase and greet his customers. They’re used to it by now. When I would tease him that he might lose customers, he’d tell me in his heavy French accent, “Why do you come to a place like this and want to rush? I want people to take their time and enjoy themselves!” Enjoy the wait, that was lesson number one.

Jean-Michel is a big fan of having a dream and chasing it. He encourages conversations, even with my limited French, and is my biggest cheerleader when it comes to travelling and soul-searching. A final word of advice from him, “When you’re born, you’re already fighting for life,” Jean-Michel said. “There’s no excuse to stop fighting every day.”

Over at the table with a spread of olives, pickled garlic, and bottles upon bottles of olive oil is George Petrou. Petrou comes over every week to buy a baguette and sample his olive oil during the market.

“Why do you work so much?” he would ask me. “You should be in Hollywood, you are so young, you should be carefree,” he said. I’d laugh and assure him I was enjoying my life, and that working at a place such as a farmer’s market is a lovely place for a college student’s part-time job.

I thought it was quirky but sweet that he’d mention Hollywood, until one day, when I delivered his weekly baguette, he presented me with a photo album that knocked me off my feet.

Petrou, now 94, was an indispensable component of Hollywood’s golden age. In the album, pictures of young Petrou fitting beautiful women with dresses—Elizabeth Taylor, Linda Carter and Brigitte Bardot to name a few—line the pages. He was the stylist for these glamorous, iconic figures in Hollywood, a man trusted with the red carpet looks that defined fashion six decades ago.

“All this, when I was young and handsome,” he would laugh. When I tell him he’s still quite handsome, even at almost a century old, he’ll tell me it’s because he eats olives and pickled garlic every day.

“I have never once been sick,” he said.

He’d tell me that standing up straight, with better posture than most people my age,  his voice strong, enthusiastic, willing, and his eyes clear, still determined to seize life. With proof like that, I’ve taken on eating pickled garlic every day too. George has taught me that life is for savoring, enjoying, and for goodness sakes, don’t work so much. Oh, and don’t forget your daily pickled garlic and olives.

His reaction to me going abroad?

The last I’ll mention is Alejandro. Under Alejandro’s tent are buckets of flowers lovely enough to be a meadow. His accent is hearty, and his sentences are short. He lets the blooms do most of the talking. Alejandro likes to cut me deals when I go to him for my weekly bouquet. Our Sundays go like this: I’ll hand him a six dollar bouquet…

“And–” as he hands me the bouquet, “one more beautiful smile.”

I cheese instantly, and he’ll chuckle, and I’ll skip out from under the tent. I’m sure he says that to everyone, but it still makes me feel giddy to know that a smile can still go a long way in this world. His unspoken advice to me is to keep smiling, as cliché as it is.

I’m off to another country for a semester, and I’m not sure if I’ll return to work at the market. But I’ve promised each of these characters and more that they’ll hear all about my journey when I get back. Petrou will be 95, Jean-Michel might expand his lemonade business into something bigger and Alejandro will be there to remind me to smile.