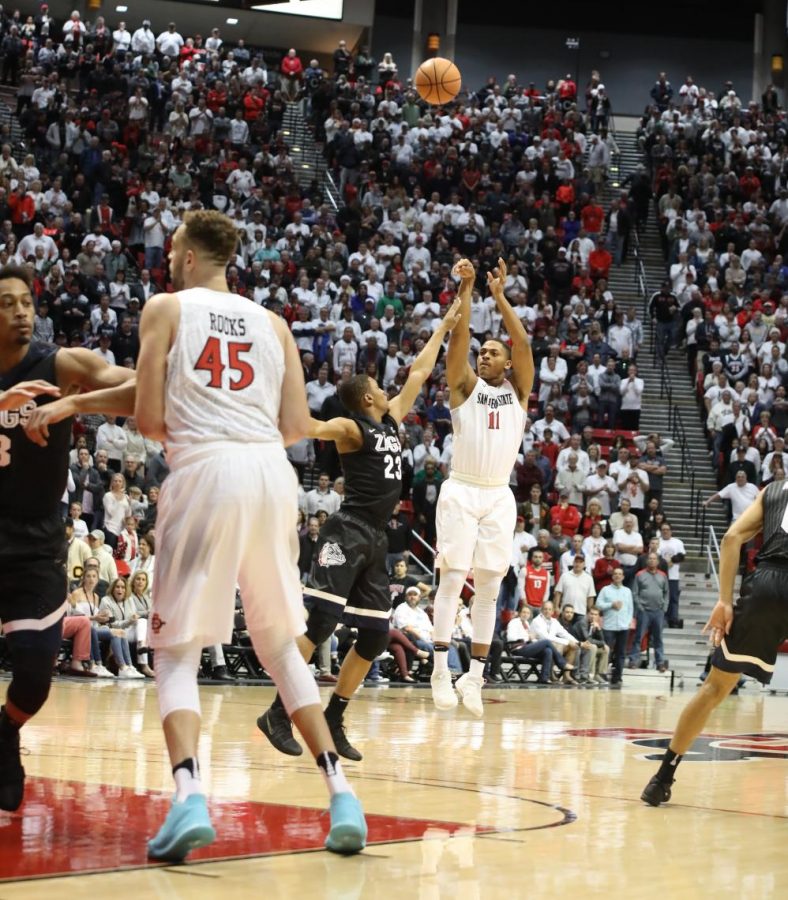 Freshman forward Matt Mitchell pulls up for three of his game-high eight points during SDSU's 33-32 win over Gonzaga.

The Aztecs have yet to trail to one.

SDSU jumped out to a quick lead against No. 12 ranked Gonzaga University, holding on for a wire-to-wire 72-70 victory on Thursday night.

The Aztecs improve to 8-3 on the season and took advantage of their last chance for a statement victory before heading into conference play against the University of Wyoming on Dec. 27.

“It’s a great win for us,” Dutcher said. “I’ve said I’m not going to worry about resume and stuff like that but when you beat a ranked team it feels good.”

Kell then scored four straight points – two from the charity stripe and two on a driving unassisted layup – to give the Aztecs a 66-60 lead with 47 seconds left.

An off-balance three-pointer by redshirt freshman guard Zach Norvell Jr. got Gonzaga to within 71-67 with 11.9 seconds to play, but it would be too little too late.

Norvell Jr. led the Bulldogs in scoring with 22 points to go along with four rebounds.

The Aztecs led 49-41 with 7:14 to play in the game, before Gonzaga, which struggled early while shooting only 30 percent in the first half, caught fire from the field, making a run of five straight field goals.

SDSU was able to hold off the Bulldogs run thanks to good free throw shooting, as the team went 18-for-22 from the charity stripe in the second half.

The Aztecs led 64-59 with 3:59 left to play in the game, and six of the team’s next eight points came courtesy of Kell from the line.

“At the end they were a lot smarter than us,” Gonzaga head coach Mark Few said. “Trey Kell shot nothing but free throws – we have to be smarter than that.”

SDSU shot only 28 percent from the field in the first half, which it ended with ten consecutive missed field goals in the final 7:16, but still went into halftime with a 25-23 lead.

The Aztecs jumped out to an 11-0 lead to begin the game, after two three-pointers from Mitchell, a three from junior guard Devin Watson (10 points, three assists) and a shot in the lane by senior forward Malik Pope (nine points, six rebounds).

Junior guard Jeremy Hemsley started the game in place of Kell, who first came in with 11:10 left in the opening half, as he continues to fight through injuries to his ankle and quad.

“(Hemsley’s) playing at a really nice level,” Dutcher said. “It was an easy decision for me to say I’m going to start (Hemsley) knowing I had (Kell) behind him.”

Gonzaga missed it’s first six field goals, and found themselves down 22-10 with 8:27 to play in the first half after a 6-0 run by SDSU was punctuated with a jumper from Kell.

The Bulldogs pulled to within 24-21 with 4:00 left in the first half after an 8-0 run that included back-to-back three-pointers from sophomore forward Killian Tillie (seven points, five rebounds, three assists) and senior forward Johnathan Williams.

Williams led all players with 15 rebounds and had 12 points in the game, along with four blocks.

Gonzaga had won 12 straight games on the road prior to tonight’s game, which was the longest active streak in the NCAA.

The victory was the Aztecs first against a nationally ranked opponent since defeating the No. 14 ranked University of California, Berkeley, 72-58, in Las Vegas on Nov. 26, 2015.