Opinion: State’s findings of racism are an attack on academic freedom and racial justice 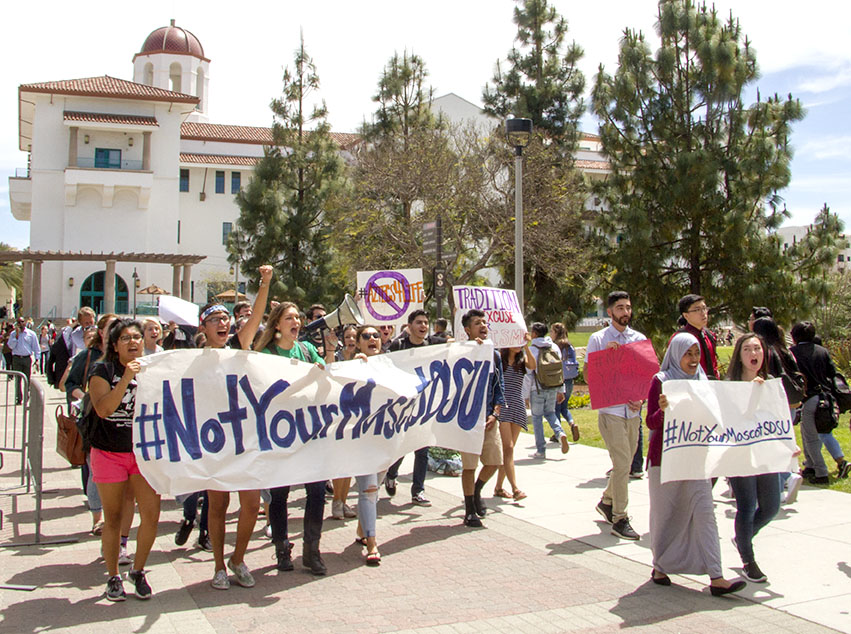 Students march to change the mascot prior to the spring 2017 AS vote. Photo by Andrew Dyer.

An investigation that concluded a university lecturer made racist statements and discriminated against a white student is nothing less than an assault on academic freedom that calls into question the future of academia surrounding racism, cultural appropriation, whiteness, white supremacy and other oppressive systems. While Oscar “Ozzie” Monge was not free of wrongdoing, his mistakes do not meet the definitions of racism or discrimination.

Crystal Sudano’s interpretation of Monge’s critiques as discrimination against her race, and the investigator’s failure to understand Monge’s criticism within an academic context, have dangerous implications. Every single term, descriptor and phrase Monge used are, in fact, terms that sociologists, educators and intellectuals across the nation have studied and researched for years.

“Whiteness” refers to a system of white supremacy and oppression —  not a person. Additionally, “cultural appropriation” and “white savior complex” are both academic terms that educators in universities across the board teach as part of their course material. These concepts have been proven to not only exist, but exist and operate at the benefit of white people at the expense of people of color.

Sudano’s complaints were textbook examples of white fragility and of  a “well-meaning” white person who simply could not take constructive criticism. Rather than recognizing the fact that criticism and advice are in fact, crucial components of allyship, she took it personally. Sudano, through her communication with Monge, did not seem to understand the position her whiteness placed her in society. Instead of making an attempt to improve her approach, she got mad.

When students enter certain spaces with the intention of assisting those impacted by whiteness, they should enter with an open mind, and complete willingness to learn, which Sudano did not do. Had she done her research prior to insisting on joining Monge’s fight, perhaps she would’ve understood that he was not attacking her because she was white, but rather educating her on a variety of basic concepts discussed extensively in the world of academia, racial justice and activism.

More ominous than the repercussions Monge might face are the potential ramifications on the academic freedom of professors at SDSU and beyond. This freedom is a fundamental value of higher education, and one we cannot afford to lose as a result of one misinformed, fragile student.

Will professors now be expected to bite their tongues when the topic of racism is introduced in the classroom? How are professors expected to discuss the impact of whiteness and white supremacy? What does this mean for academics who have dedicated their lives to studying and educating students on the effects of racism, stereotypes and oppression?

The findings of this investigation suggest that sociology professors should soften their material in order to cater to the egos of white people, just in case they might take it personally. It both robs professors of their duty as educators and students of their ability to confront the effects of racial inequity endemic in our society. It might also prevent white people interested in joining a social justice movement from learning the do’s and don’ts because someone might get offended.

The university must ask itself: Is the academic definition of racism itself racist if a student disagrees or takes offense?

Ultimately, this investigation represents an attack on academic freedom by a California Attorney General’s office more interested in protecting the feelings of white people than acknowledging the racist underpinnings of power on which Monge was trying to educate his student.

If the university decides to let go of Monge, this will not only derail the very foundation of academic success across our campus, but it will send a regressive message to professors and students. It’ll place us in a stagnant position, one which tells students who are impacted by the evil of white supremacy that what oppresses them just doesn’t matter as much as the feelings — real or imagined — of white students.

Universities must make it a priority to promote and highlight the importance of academic freedom amongst its students and faculty. They should be environments welcoming of the  exchange and discussion of all topics, especially sensitive ones relevant today, even when it sparks uncomfortable, controversial discourse. It is the very essence of higher education, and it’s absolutely worth fighting for.