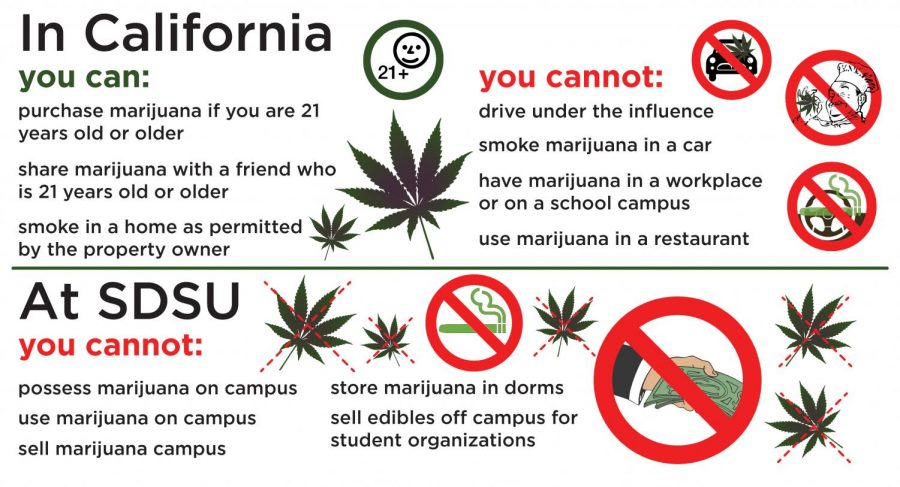 Marijuana may now be legal for recreational use in California as of Jan. 1, but it’s still illegal on San Diego State’s campus.

Following the passage of Proposition 64 during the 2016 election, adults 21 and older can buy marijuana from state-licensed recreational dispensaries, with a daily purchase limit of up to one ounce or edible products containing no more than eight grams of cannabis concentrate.

But federal laws require that SDSU — which receives federal research funding and student financial aid — prohibit the use, possession and distribution of marijuana on campus and in the workplace, university spokesperson Jill Esterbrooks said in an email.

“SDSU students and employees who violate the university policy may face discipline, including a maximum penalty of dismissal,” Esterbrooks said.

And since both medical and recreational marijuana are illegal under federal law, FAFSA eligibility can be revoked if a student is convicted of marijuana possession while receiving federal aid, although federal agents have been historically unlikely to to target individual marijuana users.

Even under state law, marijuana cannot be used in public spaces, similar to restrictions on alcohol.

It also cannot be used in vehicles by drivers or passengers.  And it remains illegal to take marijuana on a plane or transport it between states, even if both states have legalized it for recreational use.

Film sophomore Cameron Hill said he believes that students over 21 should be able to use cannabis in their dorm rooms to ensure that they have a safe place to consume marijuana.

“It’s everywhere, so why even try to push harsh and strict limitations on something that is so frequently seen? I’d rather see people smoking marijuana in their dorms, in a place that’s safe,” Hill said.

It’s worth noting that students who live on campus are typically underclassmen, and thus tend to be underage.

Though he said that he feels other political issues are more important, SDSU College Republicans President Brandon Jones believes that the legalization of recreational marijuana highlights the conflict of federal rights vs states’ rights.

“This is going to be an issue that will probably end up in the Supreme Court very soon,” Jones said in a message. “It’s a classic example of a struggle for power between federal and state governments.”