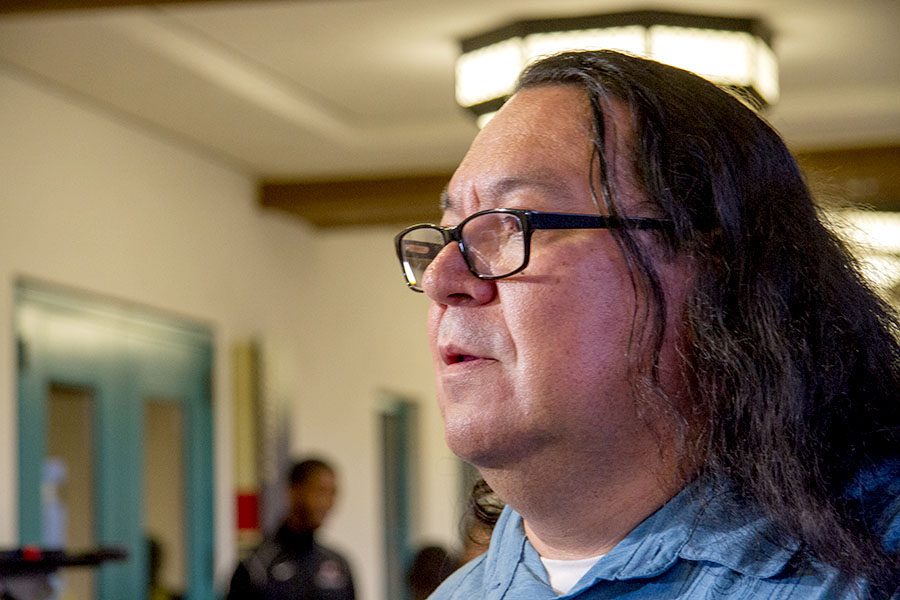 American Indian Studies Lecturer Oscar "Ozzie" Monge at an Associated Students vote on a resolution to retire the Aztec mascot and moniker in April 2017. Monge has been outspoken in favor of ending the mascot.

The professor who was recently found to have discriminated against a student because of her race by the California Department of Justice will no longer be teaching classes this semester.

Oscar “Ozzie” Monge, an American Indian Studies lecturer, had been scheduled as the instructor for at least three sections of AMIND 120 as recently as Monday. By Wednesday, he had been replaced.

The results of that investigation were published by The Daily Aztec on Jan. 5.

“He will not be teaching any classes this semester,” SDSU spokesperson Jill Esterbrooks said. She would not comment on whether or not the move was an official suspension.

Recent graduate Crystal Sudano, the student who initially alleged Monge was discriminating against her, said she was happy at the news.

“I’m glad the school has done the right thing,” she said.

According to the investigation report, Monge sent multiple “offensive” Facebook messages to Sudano while she was in his class during the spring 2017 semester.

In one message, he criticized her for wearing a bandana and her hair in braids to a Native American Student Alliance event, suggesting it was cultural appropriation.

In another, he criticized SDSU’s Associated Students for “how damned white it is.”

“All in all, Monge uses ‘white’ whenever he wishes to explain someone who has done something wrong, or bad,” the investigation report concluded.

It’s uncertain if Monge will eventually be allowed to return to campus.

“It’s still an ongoing investigation, and there is an appeals process,” Esterbrooks said.

Monge, citing confidentiality requirements, declined to comment for this story.