Saying ‘goodbye’ to my best friend 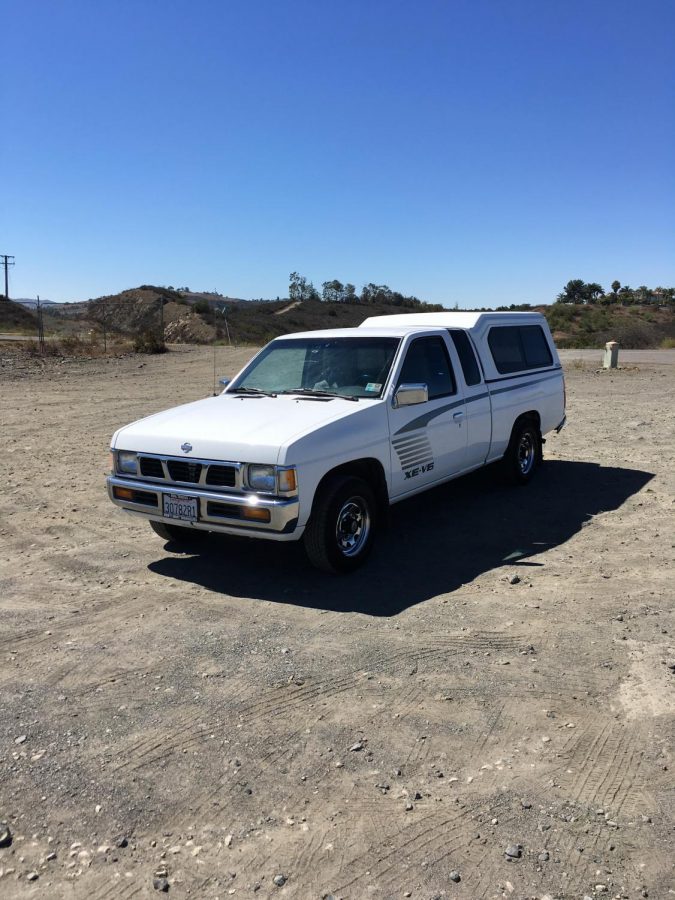 Photo by Will Fritz

Will Fritz's 1995 Nissan Pickup in Temecula.

I didn’t realize how hard it would be to say goodbye.

Maybe that was foolish of me.

There I was, sobbing uncontrollably as I pulled out of the parking lot. And of course, “See You Again” by Wiz Khalifa just so happened to have started playing on the radio at that exact moment.

I’m not talking about someone who broke my heart or anything like that. I’m crying because I just sold my first car.

And it wasn’t just any first car. It had been my grandpa’s for 15 years before he gave it to me.

In my life, I’ve moved more than a dozen times, gone to six different schools, lived in three states and have had nearly as many step-mothers.

But my grandparents, and that truck, were remarkably consistent. I could always go back to their house and feel a sense of sameness. The truck was a symbol of that.

I was two years old when my grandpa bought it in June 2000. He still tells the story of how he got it.

“We’re just here to help you get the best deal you can,” the salesman told him when he came into look at the truck, five years old at the time but with barely 7,000 miles on it.

“Let’s get one thing straight,” my grandpa responded. “You are not here to help me. You are here to make as much money in as little time as possible. And I am here to get the best deal I possibly can. I’ll give you $10,000 for it, take it or leave it.”

“This car isn’t going to make you any money sitting here on this lot,” my grandpa told them.

“You know you’re stealing this truck, right?” one of them asked my grandpa.

My grandparents would take that truck down to San Diego to pick up my brother and I when my mom was studying at University of California San Diego.

Later, when I was in kindergarten and we were living on Travis Air Force Base, they took it to come visit us.

I remember showing off my new reading skills from the backseat by reading street signs.

When my mom was deployed in the Iraq War, my grandpa came up in the truck to stay with us and help my dad out.

When I was 10, my grandpa and I took the truck to Newport Beach for my first fishing trip.

When I was 15, I moved back to Temecula, and I got taken to school in that truck almost every day.

On our way to register me for school, the battery in our other car died, and all of us — my grandparents, my dad and I — had to pile into the little pickup to get to the district office.

One day, my grandparents were talking about how they were eventually going to buy a new car to replace the truck. I half-jokingly asked them if I could have it, not expecting them to seriously consider it.

They looked at each other.

“If you keep your grades up,” my grandma told me, “we’ll give you the truck when we buy our new car.”

It was the car I learned to drive in. I spent countless hours practicing letting off the clutch, and shifting, and hill starts. When it came time to take my driving test, it turned out that the truck’s blinkers had been broken the entire time and I had to use my aunt’s car.

Somewhat ironically, driving a car with an automatic transmission was so foreign to me that I got nervous and failed the test.

When I took it again, we had the problem on the truck fixed, and even though my aunt offered to let me use her car again, I felt so comfortable with the truck that I elected to use it on the test, even though it was a stick shift.

I passed with flying colors the second time. And from then on, the truck was the “Willmobile.” Technically I still shared it with my grandparents, as they hadn’t bought their new car yet, but I took it to my first job at McDonald’s nearly every day.

I may not have had my first kiss in that car, but I had at least a couple of memorable ones.

It took me to awkward school dances and awards ceremonies and late-night hangouts with my friends.

My grandparents finally, officially, gave it to me as an early graduation present the month before I finished high school.

On freshman move-in day, I loaded all of my belongings into the back of the truck and took it to my first dorm room. Whenever I started to feel homesick my first year in college, I would just go and sit in the truck—my truck—and everything would feel all right for a moment.

The courteous roommate I was, I sometimes slept on the back of the Willmobile during the occasional “sexile.”

I took it to Sacramento and back twice. And even with 215,000 miles on it at the time, I drove to Arizona in the middle of the summer with the air conditioning on full blast, and that truck took it like a champ.

It was my ride to football games and parties (I Ubered back if I was a little too — ahem — under the influence, obviously). When I got my first real journalism job over the summer, it took me to city council meetings and interviews over coffee.

Since landing my job at City News Service in August, I’ve been working in the San Diego Union-Tribune building and parking in its shadow. How far that little truck and I have come.

But alas, it was not meant to last.

First, the starter went out. Then the distributor broke. And then it developed a recurring alignment problem that was going to be a pain to fix.

Slowly, I realized it was time to let go of the car.

It took a long time to come to the decision, but one day I found what I knew would be my next car, and I drove up and bought it two days later.

I was sad, but it didn’t hit me how hard it would be to say goodbye until I had to go back to the dealer to pick up something I forgot in the old truck. There it was, sitting right at the front of the lot, waiting for its next owner. Hopefully it is someone who can put more time, energy and money into keeping it up than I would be able to.

Even after all these years, that truck still shines like we’re back in 1995.