Fort forges ahead in her final season on the Mesa 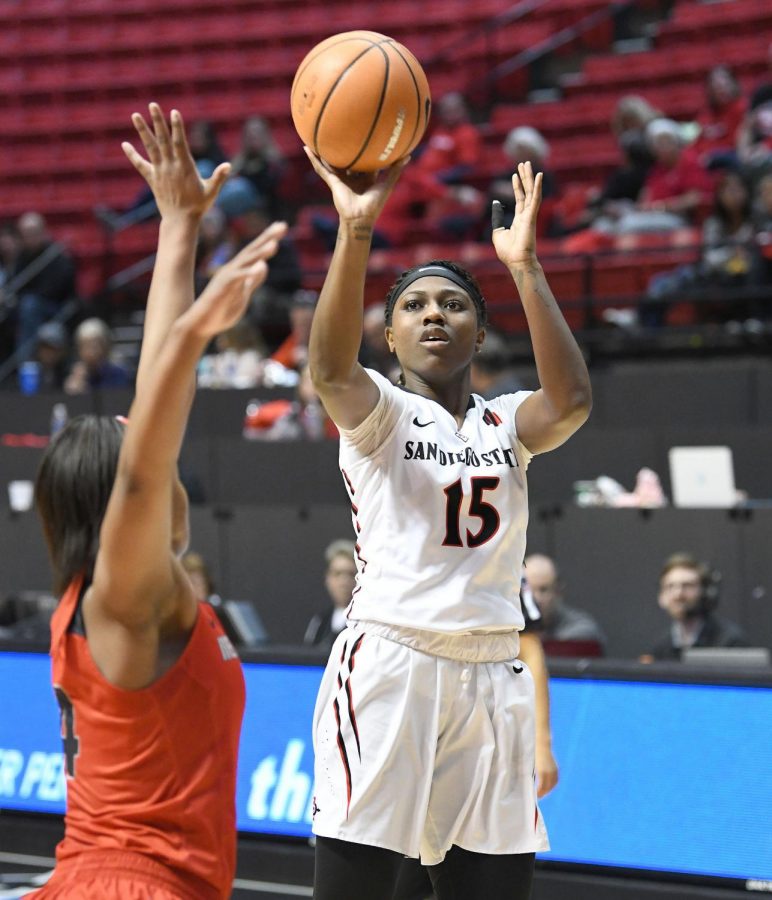 McKynzie Fort is always in attack mode on the court, similar to an NBA star that she emulates her game after on the court.

“I think my idol NBA player that I try to mimic my game after is (Russell) Westbrook,” Fort said. “Just because he’s always in that attack mode, gets to the trim, attacks all the time, and is a scoring point guard… I hope to be in comparison with him.”

Despite San Diego State women’s basketball not having a player being drafted in the WNBA since 2010, Fort has aspirations to play professional basketball.

The last SDSU women’s basketball player to be drafted was Jene Morris when she was picked 11th overall by the Indiana Fever.

There has been an eight-year hiatus for SDSU in the draft, but Fort looks to change that.

“Definitely trying to get there… I think as of right now it’s a pretty good look for me as long as I keep producing,” Fort said.

This season it’s apparent that she had put in work in the offseason after the Aztecs went 11-19 in the 2016-2017 season. Fort led the team in scoring last season with 15.9 points per game, but she wanted to find ways to help the team in her final season.

“Personally, I’ve been focusing on how I can help the team in the biggest ways, whether it be assisting, scoring, or rebounding… I’d like to think I have a mid-range shot and court vision,” Fort said. “I think it’s hard for the defense to play me, especially now that I’m trying to add a three-point shot, I keep the defense honest and find my teammates for open shots.”

The 2017-2018 season started off with Fort shooting to the top of scoring in the Mountain West, and as a result, SDSU began to become a force in the conference once again.

Going into SDSUs game against the University of Arizona, Fort was one of the top scorers in the MW. During the 78-67 SDSU win – the first win against a Pac-12 team since 2012 – Fort suffered a broken thumb.

The injury hindered her scoring abilities and forced her to sit out until she was able to play again. The adversity forced her to elevate her game to a level she calls her best, strengthening her already aggressive style of play.

“After breaking my thumb, I tried to stay aggressive and get that mental piece back, but I do think I am playing my best ball,” Fort said.

Freshman guard Te’a Adams, who has been learning from Fort, said there is an absence in the offense when the Fontana, California native is not on the court.

“It’s tough (when Fort is off the court),” Adams said. “There is definitely a missing piece when she is out.”

Her aggressive style of play leads not only to scoring, but also open shots for her teammates.

Senior guard Khalia Lark, who has played for four years with Fort, had nothing but support for the senior guard.

“McKynzie Fort is a big part of our team, and everyone knows that,” Lark said.

The support from her teammates does not go unnoticed by Fort, and as a senior on the team this season she realizes the major role she plays not only on the court but also during practice and in the locker room.

“It’s kind of been a challenge having that leadership role that I’ve been able to take it on, and just realize the bigger picture that it’s for the betterment of the team,” Fort said. “I focus on how I can help the team win and be better than last season, since it is my last year it’s a huge focus for me to help the team win, and part of that is me taking a big leadership role.”

Fort has made the most of her final season at SDSU, her consistent hard work and determination earned the respect of head coach Stacie Terry.

“She’s worked really hard for all the things she’s getting right now,” Terry said. “There is no surprise that she’s playing as well as she is… She’s determined to have a great senior season and help us win games this year.”

But before she can take her talents to the league, Fort has one more goal to complete at SDSU: a conference title.

“Personal short-term goals are focusing on winning and taking each day at a time,” Fort said. “Long-term goal… is a MW title.”