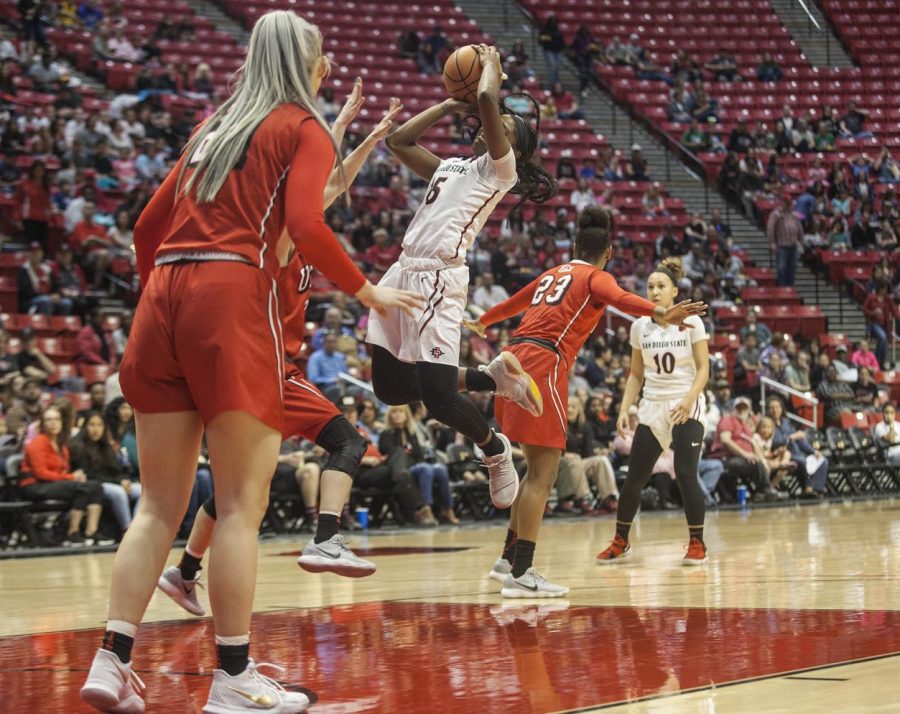 Senior guard Geena Gomez attempts a shot in the first half during the Aztecs 75-64 loss to University of Nevada, Las Vegas, at Viejas Arena on Jan. 27

The Aztecs led by as many as 18 points in the first half, but after 13 lead changes the Lady Rebels went on a 16-4 run to end the game to pull away for the win.

“I thought we came out with the right mentality. There’s a toughness that you have to have when playing UNLV, they come out and try to out tough you,” head coach Stacie Terry said. “I thought we stood toe to toe in the first half. Second half it wasn’t as consistent, the basket got really tight for us and we gave up that lead. Overall we played good in spurts.”

“I think playing UNLV is always an exciting game for us, there’s always a little bit of trash talking going on,” Lark said. “They seem to be more aggressive when they play us so we knew we were going to have to match it.”

“Notoriously, third quarter we always start off slow. We couldn’t afford to do that, especially against a top team in the conference,” Gomez said. “We were playing catch up, caught back up.”

UNLV junior center Katie Powell had a big game for the visitors, recording a double double with 21 points and 16 rebounds.

The game was a back and forth scoring affair until late in the fourth, with SDSU holding on to a slim 60-59 advantage with 5:53 left in the game.

The Aztecs would not lead again for the remainder of the contest, but were able to cut the Lady Rebels lead to as little as three points with 3:30 left in the game after a jumper by freshman guard Te’a Adams (7 points).

UNLV senior guard Brooke Johnson, who led the team with 23 points, proceeded to sink a three point shot to help keep the Aztecs at bay.

The Aztecs went into the half with a 35-26 advantage, which included an early 14-0 run in the first quarter.

SDSU’s largest lead of the half came with 5:33 left in the second quarter, after a free throw from Adams gave the Aztecs a 35-17 advantage.

The Aztecs would not score for the remainder of the half, during which time UNLV went on a 9-0 run to cut into its deficit.

UNLV struggled from the field the opening half, finishing with more personal fouls (10) than made field goals (nine) while shooting only 29 percent from the field.

Lark scored 12 points on five of five shooting to lead the Aztecs into the halftime break.