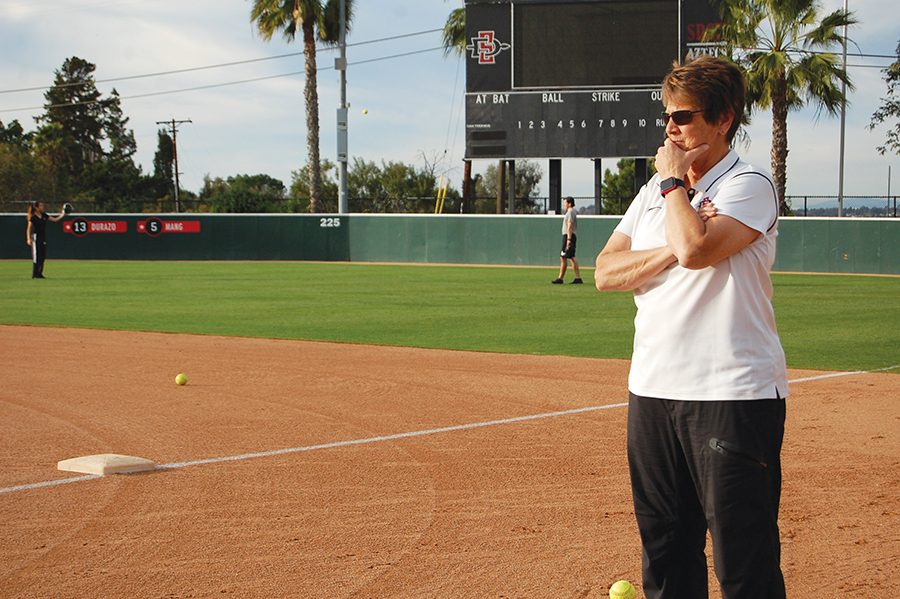 With an inviting smile, San Diego State softball head coach Kathy Van Wyk stands just inside the dugout and field house, silhouetted by the grey sunshine of San Diego’s early spring. The edifice, added to SDSU’s Complex in 2005, is spacious and accommodating, with state of the art lockers, a lounge, study area and kitchenette.

Both the dugout and the impeccably manicured field next to it, lined with 300 permanent seats and additional room for 1,000 fans, are as much a reflection of Van Wyk’s dedication to building a competitive program as they are a testament to Title IX’s influence in creating a conducive environment for competitive female programs at a collegiate level.

Build it and they will come.

But Van Wyk is focused on building something more substantial than just a Division I facility or even a D1 team, although she said the grounds go a long way in cultivating a sense of credibility and ownership for a sport that has often been overlooked.

“It’s amazing the huge amount of change from here to there,” she said, referencing the evolution of SDSU’s softball program in her 24 years as a coach.

Things have certainly changed. The softball team used to practice on the SDSU Field, setting up and taking down their own fences just to play.

But it is Van Wyk’s work that has made the program successful.

Last year, Van Wyk was admitted to the hall of fame at California State University, Fullerton, where she played softball for four years and later served as a coach before coming to SDSU.

“It’s not about me,” she said. “We don’t do anything unless the (players) take the direction and go with it. They have to put in the work, and the willingness to do so has grown immensely since those first days that I was here. These kids are devoted, committed, disciplined and all those things are absolute necessities for a successful program.”

Senior pitcher Alex Formby said Van Wyk has clearly influenced and generated respect for the program from players as much as from the community.

“I think I may have a different view than other people because I’m a pitcher and she works with us every day,” she said. “I  transferred in so I can compare her to other coaches and I think she’s one of the best coaches I’ve played for.”

College sports are just a door to the real world for the vast majority of players, said Van Wyk, so it would be negligent to only prepare players for the game.

“I think it’s probably our main purpose as college coaches,” she said. “We spent a lot more time on subjects like treating each other respect, coming together with good chemistry as a program, respecting each other’s differences, and learning how to deal with things that you don’t like in the real world. Those are all steps to going forward and getting that job and moving on to be successful people.”

The well-rounded athlete is a repeating theme in the softball program. Redshirt junior Katie Byrd said Van Wyk trains them on their inner strength as much as their outer strength.

“We work a lot on mental toughness,” the second baseman said. “We’ve had to do a lot of hard things as a team that she has led us through, but through our team meetings and our talks, she has definitely taught us what it takes. She is a very mentally tough person, she knows how to push her players to better themselves and realize their potential.”

The Aztecs have quite the grind in front of them. They have narrowly missed conference four years in a row.

“I think our number one goal this year is to get back to that conference,” Van Wyk said. “We want that conference championship — it’s been too long.”

A rigorous preseason is scheduled for the Aztecs, kicking off with a game against Stanford University on Feb. 8, but Van Wyk said the team is on track to perform well.

“What we’re doing is pushing them to learn how much they’re capable of because they underestimate themselves so much,” said Van Wyk. “If we can get them to do that every day, continuing to get better, we’ll be in great shape for the preseason.”

The team’s roster has a lot of fresh faces, which Formby said is a hopeful indicator of pleasant surprises this season.

“We had a really big incoming class and they’ve all worked really hard this fall and impressed a lot of people on the team,” she said. “I’m excited to see them play their first games. I think we have a lot of potential.”

Early season problems are, of course, presenting themselves, but Deniz said the coaches were expecting as much — this is what preseason is for, after all.

“It’s giving people opportunities early in the season, finding the combination that works the best, the lineup that’s going to be the most successful,” she said. “But (everything is) coming together, and we’re chomping at the bit to play somebody other than ourselves.”

Deniz, too, said she has been touched by the far-reaching influence of Van Wyk.

“When I took this job, I didn’t really think I’d be here for ten years,” she said. “But through the mentorship she’s provided me as a professional, as a coach, I’ve learned so much — from a different way of looking at the game, to how to run a program and how to administrate a program. She’s been a tremendous mentor and teacher.”

And it may be that the building of people, rather than just a program, is what sets Van Wyk apart from other successful coaches. As the elegant softball stadium is a sign that the university has begun to appreciate and take a vested interest in softball, so the coaches and players of the team are a reflection of Van Wyk’s tender, mindful care that has now spanned decades and produced as many or more great people as it has great seasons.

“I know that’s what she’s most proud of,” Denis said. “Watching (the players) mature, and sometimes going through struggle and conflict, and getting through to the other side and saying, ‘okay, we’re better for it.’ The players, current and alumni, would all say that she gave them all those pieces. She cared about them, she made them better, and she challenged them at the same time. And when you go to college to play a sport, that’s what you want from a coach.”