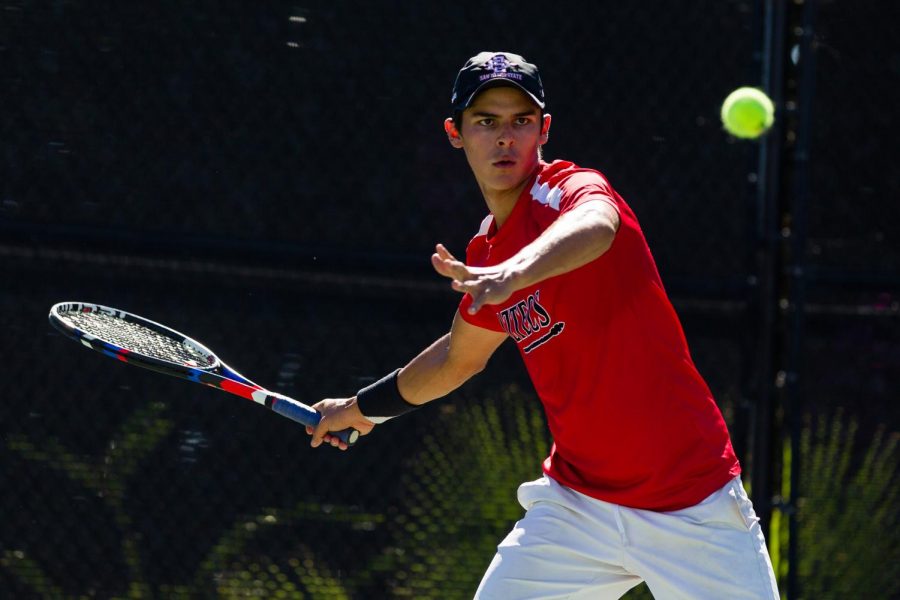 Ignacio Martinez competes during the Aztec Invitational in Oct. 2017.

Hoping to erase the memories of an underwhelming 2017, San Diego State men’s tennis will turn to freshman Ignacio Martinez in the new season, as he attempts to provide the Aztecs with rejuvenated energy and enthusiasm.

The Aztecs finished last season with a record of 10-15 overall, including 4-3 in Mountain West Conference play.

SDSU men’s tennis head coach Gene Carswell said that Martinez has the potential to be a very successful player on the Mesa.

“I’m excited about his future as an Aztec,” Carswell said. “He’s shown signs of where his game down the line is going to take him. He’s a strong baseliner who can dictate from the backcourt and has the ability to move forward.”

Martinez, born in Venezuela before moving to Florida at age 10, adjusted to the American culture and way-of-life rather quickly.

“(The move to the U.S.) was hard at first because of knowing no English and the different culture,” Martinez said. “Since I was so young it wasn’t too hard to adjust. I started learning English with a tutor early on and became accustomed to my life (in the U.S.)”

After adjusting to his new American lifestyle, Martinez discovered his passion for tennis after his mother forced him out of the house because he spent too much time playing video games.

“When I was very young my mom got me a GameCube,” Martinez said. “I was sort of addicted to the games. She thought a summer camp with tennis would be a fun idea. I started playing tennis and I never stopped.”

Martinez began to watch and admire an athlete different than the players on his GameCube: Roger Federer, a global tennis icon.

“(Federer) has always been my favorite player,” Martinez said. “He’s the person I look up to when I think about tennis.”

Since becoming only one of two freshmen on the tennis court for the Scarlet and Black, Martinez said he wants to help the team reach its end goal any way that he can.

“I want to do my best in any position they give me,” Martinez said. “I want to try to win matches for the team and just do the best I can to get wins for the team.”

Carswell said that he expects Martinez is going to play a big role in the near future for Aztecs tennis.

“He’s going to develop quite a bit over the years,” Carswell said. “I see him as a big contributor to what we’re going to be doing over the next four years.”

Martinez said that the team has one goal in mind for the upcoming season.

“We want to win conference,” Martinez said. “That’s the dream of every one (of us).”