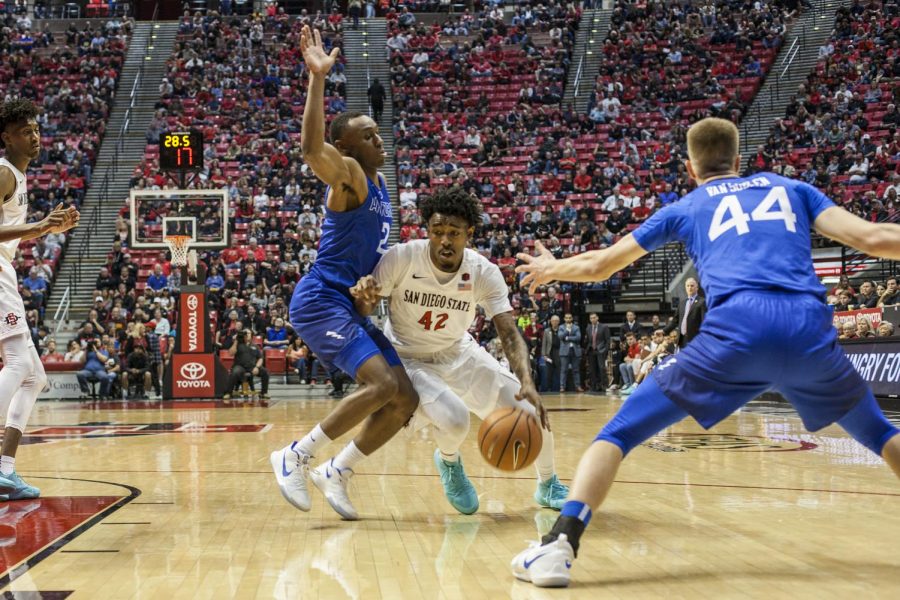 Jeremy Hemsley drives to the basket during the Aztecs 81-50 victory over Air Force at Viejas Arena on Feb. 3.

San Diego State men’s basketball may be in a hole in the Mountain West Conference, but the team continues to find itself on the winning end at Viejas Arena.

The home court success kept on rolling Saturday night, with the Aztecs defeating Air Force Academy by a final score of 81-50.

“We made some early threes to start this game so that always opens the game up,” head coach Brian Dutcher said. “We’ve been pretty dominant at home in the conference.”

The Aztecs, who remain in eighth place in the conference with a record of 5-5, improved to 9-2 at home this season and 13-8 overall.

“I think we know what’s at stake,” junior guard Jeremy Hemsley said. “We know how close we are to March so I don’t think anybody is taking anything lightly.”

Freshman forward Jalen McDaniels led the Aztecs with 16 points and 13 rebounds on seven of ten shooting, securing his fifth double-double of the season with a layup just under halfway into the final period.

McDaniels fired up the crowd with a big dunk with 13:33 to play, and said after the game that his big plays are simply a result of staying aggressive.

“It just happens,” he said. “You just keep playing hard, crashing the glass, things are going to happen when you play hard.”

It was the second straight game in double figures for Hemsley, who has come off the bench for much of the season but started in place of injured senior guard Trey Kell.

“I feel like myself again,” Hemsley said. “It was hard at the beginning of the season, it was real hard. I think I’m back to myself, I know my role.”

The Aztecs finished the game with 52 percent shooting, while Air Force shot only 33 percent from the field, including six of 27 from downtown.

The Falcons were led on offense by sophomore forward Lavelle Scottie, who had 16 points and five rebounds.

Scottie and McDaniels got into an altercation that involved pushing and clapping with just over nine minutes to play and the Aztecs leading by 25 points.

Both players were issued technical fouls, and McDaniels said after the game that it was just basketball.

“We were just competing that’s pretty much it,” he said. “It was not personal, not on my end anyway.”

The Aztecs made their first five shots to jump out to a 13-2 lead, and went into the break with a 35-21 advantage.

SDSU led by as many as 18 points in the opening half, after a three-pointer by freshman Jordan Schakel gave the team a 29-11 lead with 5:44 to play.

Hemsley and Montana co-led the Aztecs in scoring in the opening period with eight points each.

Scottie did his best to keep the Falcons close, scoring nearly half of his teams points before the break with 10.

SDSU’s next game will be on the road against Fresno State University on Feb. 6, as the Aztecs look to avenge a mid-January home loss to the Bulldogs.