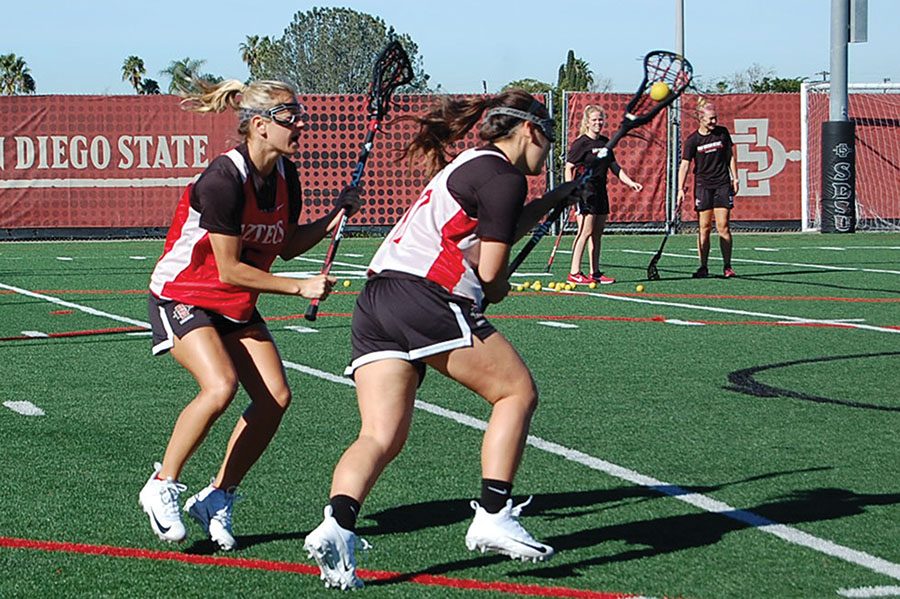 San Diego State women’s lacrosse captain Mackenzie Lech knows what it feels like to play on a team that is having a down year.

The senior from Milton, Georgia was part of a 4-11 team during her sophomore season, a significant downgrade from the 9-8 team she was apart of during her first year on the Mesa.

After last season, the senior midfielder got a taste of what it feels like to win again.

Lech started every game, and scored her lone goal of the season during the teams 18-13 victory over the University of Oregon in the Mountain Pacific Sports Federation postseason tournament.

It was the first tournament victory in the teams six year history, and was the cherry on top of a 10 win season, also a new record.

All that’s left now is to do even better.

“Last season was amazing,” Lech said. “I just want to beat that and have at least 11 wins, which I think is definitely doable.”

“It’s just such a bigger sense of pride of leading a team, and we have such a great team this year,” Lech said. “I’m so excited to be able to accomplish new things that this team has never done before.”

Lech is at her best on the defensive end, finishing last season with 23 turnovers caused and 40 ground balls, the most of any returning player in both categories.

“I definitely want to keep getting ground balls, turnovers, running the ball up the field,” Lech said.

White is expecting Lech to not only remain a critical piece on the defensive end, but also to teach the younger players on the team the right way to play.

“I think (Lech) provides a sense of calm in the defensive end,” White said. “She leads by example going hard for every ground ball. That’s kind of her jam and her speed.”

Lech and midfielder Elizabeth Rourke are the only returning seniors, making Lech’s ability to corral a young team crucial.

“When things aren’t going right (Lech) can bring the team in and calm them down and unify us again,” White said. “I think that has been an important role for us, instead of getting frazzled, and I think we’re looking forward to that.”

The MPSF will look different this season, after six teams fled the conference following the end of last year, leaving only the University of California, Davis and Fresno State University remaining alongside SDSU.

Still, there are plenty of big-name schools on the schedule, including 2017 MPSF champion University of Southern California, and the University of Notre Dame.

The game at Notre Dame will be the final tuneup for this years MPSF championship — which SDSU is hosting — and Lech said she is excited to finish her career while helping put a young program on the map.

“Just being able to go to Notre Dame and to these other huge schools and prove ourselves and make San Diego State more known in the lacrosse world,” Lech said. “It’s a cool feeling to have that, being able to leave the team in that way.”