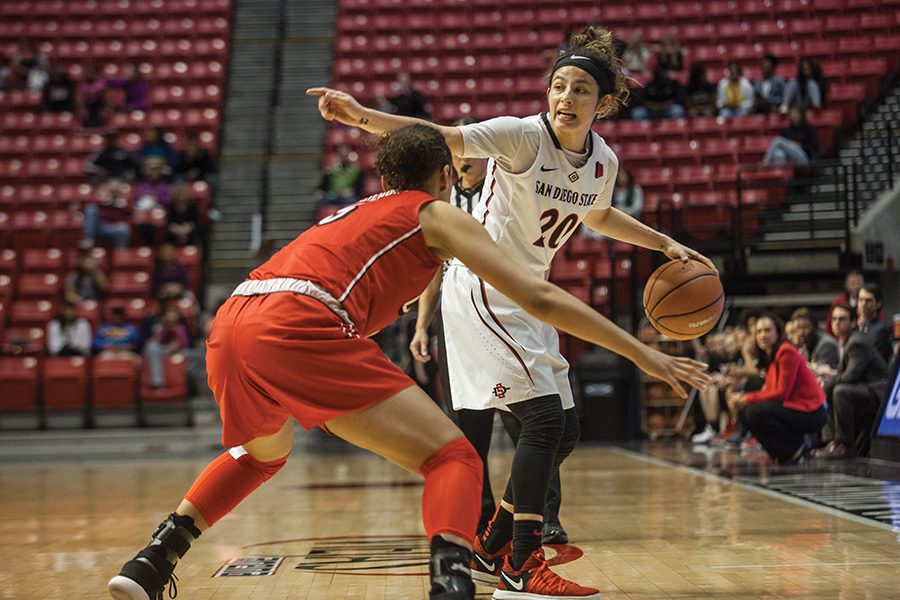 Senior guard Geena Gomez controls the ball during the Aztecs 75-64 loss to UNLV on Jan. 27 at Viejas Arena.

Most recently, SDSU went 0 for 11 from the field in the fourth quarter en route to a 61-51 loss against Air Force on Feb. 3

The Aztecs are now sitting at a record of 9-12 overall and 3-7 in the Mountain West Conference, which is the last thing head coach Stacie Terry wants this deep in the season.

“We’ve had so many close games (this season) and we have to make sure we stay focused and disciplined at the end of those moments, that’s the difference,” Terry said after her team blew an 18 point lead during a home loss to University of Nevada, Las Vegas on Jan. 27.

The only positive the Aztecs can take from their last loss is that that they can only go up from zero percent shooting in fourth quarter.

SDSU does not lack veteran star power, with senior guard Mykenzie Fort leading the team in scoring with 17 points per game and senior guard Khalia Lark showing flashes of greatness during games to keep it close.

They also have the young talent, with freshman guard Naje Murray third on the team in scoring with 9.1 points per game and freshman guard Te’a Adams averaging quality minutes off the bench.

“The freshman helped us pick up the intensity in practice, (we) worked a lot on defense so we have goals we’ve been setting putting extra work in the gym,” Fort said “I love playing with (the freshman)… it’s fun, it’s a lot of fun playing with them.”

The team also has the right coach in Terry, an SDSU graduate who has presided on the coaching staffs at schools like University of California, Los Angeles and Louisiana State University before returning to become the head coach of the Aztecs in 2013.

So what in the world is the problem?

It starts in the third quarter, when the Aztecs are notorious for mediocre performances.

“Third quarter we always start off slow… we can’t afford to do that,” senior guard Geena Gomez said following the team’s recent loss to UNLV.

Lark said that the team is trying to figure out what the source of its third quarter problem is.

Another issue is the team’s shooting percentage, with the Aztecs averaging just 33 percent from the field this season.

SDSU is also being outscored by its opponents by an average of 68 to 65.

The Aztecs have been close in many games this season, and despite sitting in eight place in the MW, Lark is confident in the Aztecs abilities to play with every team in the conference.

“We know we can play with anyone,” Lark said. “We need to tighten up with March coming up and then conference, so that’s our biggest focus right now.”

If SDSU can figure how to play with more consistency in the second half of games, a MW title could hang in the balance.