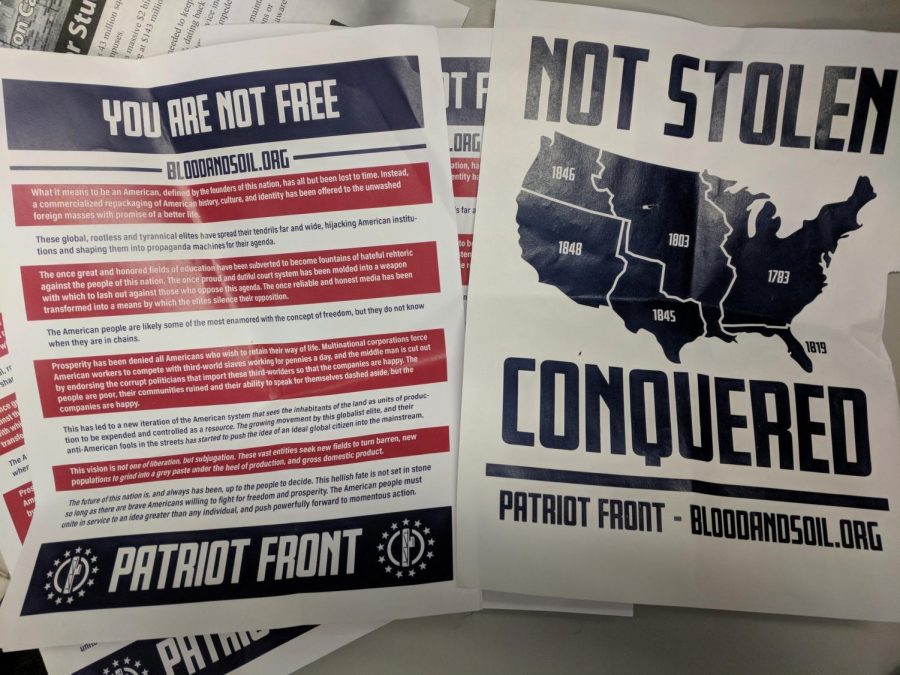 Patriot Front, described by the Anti-Defamation League as a “racist, anti-Semitic white supremacist group,” left flyers with the statement “Not Stolen, Conquered” above a map of the United States throughout the Music building on or before Jan. 29.

Identity Evropa CEO Patrick Casey, who was formerly known by the pseudonym Reinhard Wolff, is a 2016 graduate of SDSU.

His organization is not associated with Patriot Front.

“[Patriot Front] consider themselves fascists, we’re more of an identitarian organization,” Casey said. “Identitarianism is a way of looking at things that focuses on identity, and of course our identity is white Americans or people of European heritage. Identitarianism doesn’t imply authoritarianism, it doesn’t imply a particular form of government, of economics and so forth, whereas I think fascism and obviously national socialism certainly do.”

SDSU College Republicans President Brandon Jones said while he does not support either group’s views, he does think they have a free speech right to voice their opinions on campus.

Jones said he doesn’t believe that the flyers are being posted by students.

Casey said that he believes there are between 50 and 100 members of Identity Evropa who are students at SDSU.

Patriot Front and Identity Evropa flyers have also been found on other nearby campuses, such as UC San Diego and San Diego Mesa College.

The Triton, a campus newspaper at UCSD, recently reported on an incident at UCSD allegedly involving someone claiming to be a member of Identity Evropa disrupting an ethnic studies class lecture and showing a “badge.” Casey said that the individual at UCSD was not affiliated with Identity Evropa and stated that group does not have badges.

“In times where I feel like black people, and non-black people, are becoming more accepting of people in the culture and we’re starting to embrace everything about us including our natural hair and skin color, this is definitely very upsetting to see people be ignorant and still so stubborn to move along with change,” she said. “If you do not continue to progress, you will be left behind.”

Devlugt said that she, and other students on campus who she has spoken to, regularly experience microaggressions of racism.

“In African Student Union, when we have meetings and we open it up, I’ve heard students talking about their roommates asking if they know how to twerk, and different things like that,” Devlugt said. “They’re just expecting them to be a representation of a stereotype that’s depicted of us.”

The Anti-Defamation League recently published that there was a 258 percent increase in instance of white supremacist propaganda being distributed on college campuses throughout America. During fall 2017, there were 147 recorded instances of propaganda distribution between Sept. 1 and Dec. 31, according to the organization.

In SDSU’s 2017 Annual Security Report,  there were three hate crimes in 2016, compared to two in 2015 and zero in 2014. San Diego State police Cpl. Mark Peterson said official numbers have not yet been finalized for 2017.

Patriot Front did not respond to requests for an interview.