Alumna honors loss of her father in self-published book 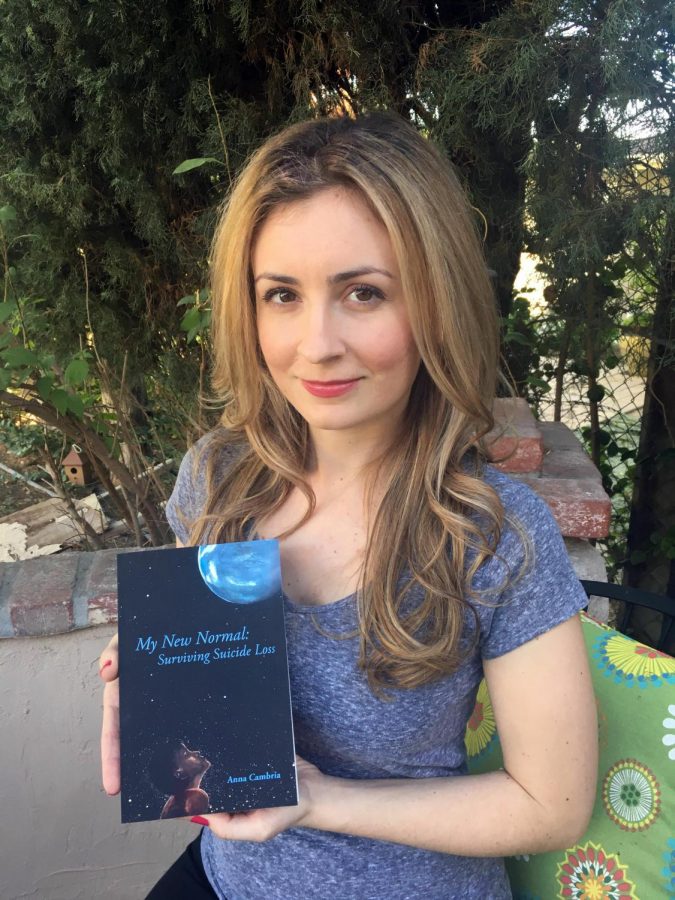 On a Thursday morning in May 2016, Anna Cambria was taking her final steps as a San Diego State college undergrad. She eagerly awaited the moment when her diploma would be in her hand and she would officially have her English literature degree, ready to start the newest chapter of her life. She said she always wanted to be a writer.

The next month, however, her life changed when her father attempted suicide on June 24, 2016. Two weeks later after his first attempt, he took his own life.

“His first attempt was just something completely unexpected,” Cambria said. “I was at a high in my life. I just graduated. I had a great internship. Then all of this just came crashing down.”

At what was supposed to be one of the happiest times in the world for Cambria came pain, loss and grief. Feeling lost and alone, Cambria searched online for information from people her own age who had lost a parent to suicide.

Seeing how little information there was for her to relate to and find support in, Cambria began and eventually published a journal-style book about her experiences dealing with the loss of her father called “My New Normal: Surviving Suicide Loss.”

To keep the book’s anonymity around this topic, Cambria changed the names of the subjects in her book. She goes by Anna Cambria in her author bio and changes the name of her boyfriend and editor to Peter.

“Through this book I think it can help others as it did myself, so I definitely think it’s a win-win situation since I’ve been able to do my passion as well as help myself heal and maybe help others,” she said.

Cambria said that her dad’s mental health was completely hidden. After joining a support group and talking to other family members of people who have lost loved ones to suicide, she said that many times there were no symptoms of mental illness at all.

“That’s why I think it’s an important discussion to have and bring awareness about,” Cambria said. “He was like the best dad. And I still think that. It’s just unfortunate how some people remember him as someone who was a selfish person but that’s not true.”

Cambria said one of the goals of her book was to end the stigma surrounding mental illness and suicide. She said that, before going through the loss of her dad, even she had a sort of naïve take on people who would do this to their family. After going through the experience herself, she realized that it can be the people that you might least expect to do this.

“A lot of people and men wouldn’t want to go admit to another person that they need help,” Cambria said. “I didn’t know how trapped in your mind you can be. It can’t just go away on its own. I think the view needs to change for a lot of people because (mental illness) is something that is out of their control. You never really know what someone is going through.”

Cambria and her boyfriend Peter were dating at the time when her father committed suicide. Peter was also the editor of the Cambria’s book once she was finished writing her story.

He said that Cambria’s book appeals to a younger audience because of how much people her age would relate the same way to loss.

Suicide is the second-leading cause of death in people ages 15 to 34. Among college students aged 18 to 22, eight percent of people have had suicidal thoughts, according to the Center for Disease Control and Prevention.

“The reason Anna started writing the book is because it’s very hard to find literature about somebody losing a parent or even, say, a friend or sibling at Anna’s age group or younger,” Peter said. “Most people at her age just don’t decide to write a book about. Everybody has their own ways of dealing with it. That was her therapy.”

Peter said he’s seen a lot of other books in that genre or memoirs where many offer advice to their readers.

“While Anna’s does offer advice, it’s mainly just her telling her story and the reader either takes away from it lessons or just the novel side of it,” Peter said. “She doesn’t claim to have answers to everything. She just says ‘this is what helped me and this is what I dealt with.’”

Cambria said she feels that mental health is just as important as physical health, it should be treated on equal platforms and it shouldn’t be an embarrassing thing for people to seek help for.

“It’s normal to hear someone take the day off for the flu…or a sickness that you can see physically, but people don’t understand that a lot of people need mental health days,” Cambria said. “They wouldn’t look at it the same way as they would a physical illness and I just think that the stigma about the topic of suicide and mental illness needs to be erased.”

Cambria’s book is self-published and available on Amazon. She said she’s gotten responses from people worldwide who have expressed how much her book has helped them during their own losses.

“It’s really cool to hear from people around the world who I don’t even know who said they read my book,” Cambria said. “Friends and family who have read my book have told me that it’s given them closure and helped them remember the good thing about my dad.”