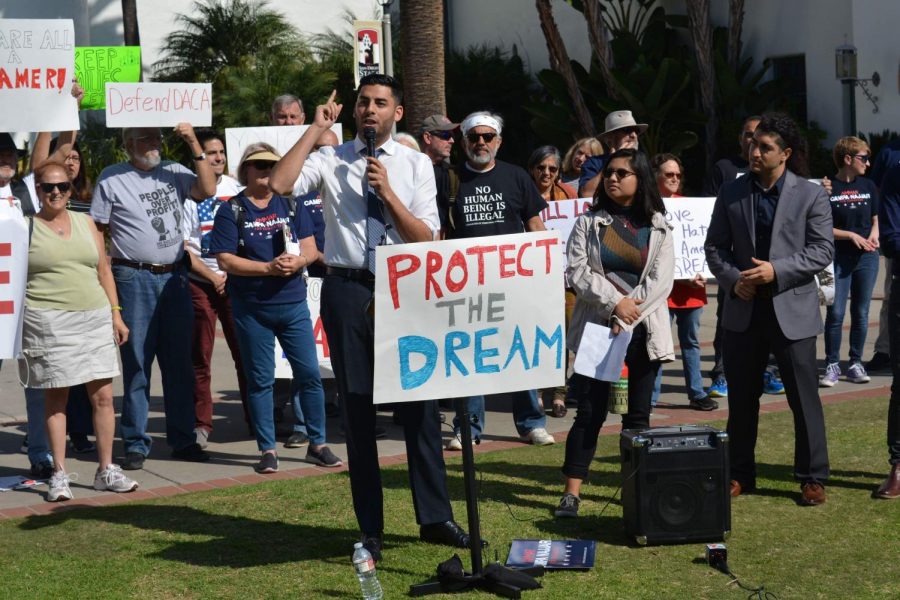 Congressional candidate Ammar Campa-Najjar addresses a crowd at a rally for immigrant rights Friday in front of Hepner Hall.

by Sofia Bert and Jessica Clemons

Advocacy groups joined a local Democratic congressional candidate Friday in front of Hepner Hall to call for a long-term solution to the Deferred Action for Childhood Arrivals program, which gave amnesty to some people brought to the U.S. illegally as children.

President Donald Trump announced in September that he would rescind the administrative program, effective in March. Victories against the Trump administration in court, juxtaposed against the failure of Congress to include any legislative version of the DACA program in a recent budget deal, have placed deferred action recipients in a teeter-tottering state of limbo.

“I’m co-leading it with other activists and show(ing) people that we haven’t given up,” Campa-Najjar said. “The fight’s not over. We’re going to keep pushing because this is a good thing not just for dreamers, but everybody who calls San Diego County home.”

The congressional seat Campa-Najjar is running for does not include the College Area, but covers a large swath of northern and eastern San Diego county, stretching from Alpine in the south to Temecula in the north and the Imperial County line in the east.

“If we want to make America great again, go back to its founding,” he said. “Look at the way we built America on the backs of immigrants, for immigrants and by immigrants.”

Illinois Congressman Luis Gutierrez, advertised as a featured speaker for the rally, said he was unable to attend due to the partial federal government shutdown Friday morning.

Three supporters who said they were DACA recipients stood behind a microphone to give their testimonies to the rally-goers.

“I’m afraid that I will lose everything that I worked so hard for,” said Natchel Bello, a student at Mesa College. “I’m afraid to give up on my own education, on my dreams and aspirations. I’m afraid to be treated like a criminal when I am just a student.”

Bello said she is hoping to transfer to a state school next year, but the process of applying for schools and scholarships amid the uncertainty of her legal status in the U.S. is difficult, she said.

Another speaker, Ali Torabi, said he moved to the U.S. from Iran and hasn’t seen his father or any of his family there in more than 22 years.

“All I’m asking for is the opportunity to see my family,” Torabi said. “My grandmother calls me crying saying ‘I haven’t seen you in twenty-two years. Have you forgotten about me? I’m getting sick and I might leave this world soon and I want to see you again before I do so.’”

While people with valid DACA status aren’t being deported for now, they risk not being able to return to the U.S. if they travel abroad.

“They’re holding us hostage,” Torabi said. “They are playing politics with our lives and I’m done with that. We’re human too.”

An aerospace engineering student at UC San Diego who identified himself only as “Diego” gave the final testimony.

“As a dreamer, the scariest thing is not knowing if there are people that support you,” he said.

“A large number of students on this campus are DACA recipients, so this is something that is affecting people on this campus and we should be aware of it and be fighting alongside the cause,” she said.

History senior Cole Parker, a member of the SDSU College Democrats, was another supporter at the rally.

“These are individuals who in every sense, except for on paper, are Americans already, and the fact that we can’t address that is increasingly frustrating,” he said.

Torabi will host a benefit art event for San Diego DREAMers called “Our Dreams Live” on Feb 16. The event will take place from 5 – 10 p.m. at the Bread and Salt art gallery at 1522 Julian Ave in San Diego. All proceeds will go toward advocacy for a legislative solution to the rescission of DACA.