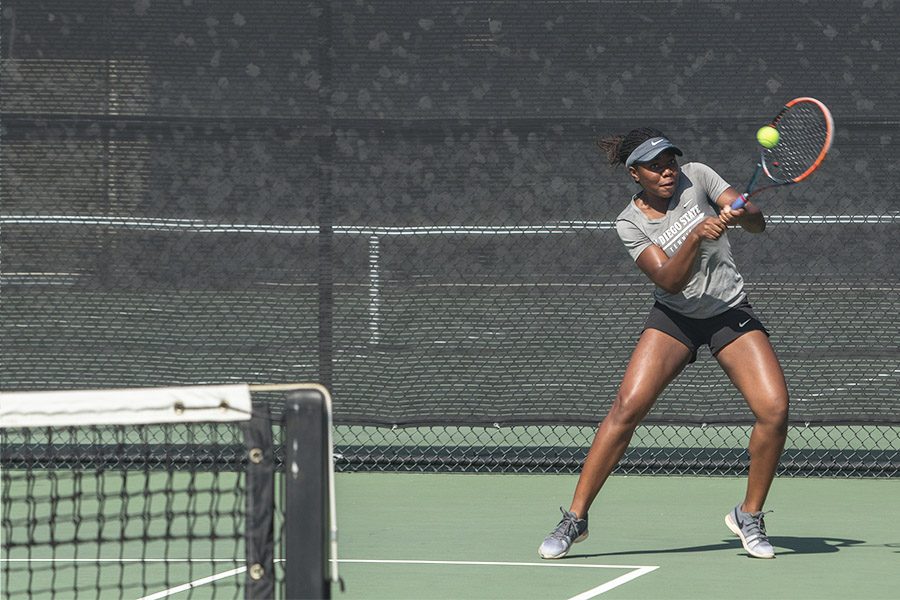 Freshman Nnena Nadozie hits the ball during a home doubles match against USD on Feb. 11. The Aztecs lost the overall match by a score of 4-2.

San Diego State women’s tennis started the weekend undefeated at home, but back-to-back losses against Brigham Young University and University of San Diego have put a damper on the team’s fast start.

The Aztecs won five of their first six games, but now sit at a record of 5-3 after falling to BYU 5-2 on Saturday and 4-2 to USD on Sunday.

Still, SDSU has already matched last years season win total — the team finished 5-18 — and look like a squad which is ready to make noise in the Mountain West Conference.

Head coach Peter Mattera has seen it all during his 23 years at the helm, and said that he is choosing to focus on the positives from the weekend.

“What I try my best to keep focused on is are we playing better every time,” Mattera said, “because it’s not always going to be reflected in the score.”

SDSU started out strong against USD, earning the opening point in doubles play for the sixth time in seven matches, but could not hold onto its lead in singles play.

“It was a hard fought match,” Mattera said. “We knew it would be, it’s always an exciting match playing your cross town rival.”

Moinard was emotional and verbal while Smith took the lead with her powerful shots to help the pair erase an 0-3 deficit.

“I love their attitude on the court,” Mattera said about the duo. “I think they know no matter the score given the fact they have so much offense to them that they’re never really out of a match until they shake hands.”

Aztecs seniors Jana Buth and Paolo Diaz fell in doubles by a score of 3-6 against USD sophomores Nicole Anderson and Daniela Morales.

There was some controversy during the match, with both players failing to agree at times with the others calls.

“There were some balls where we weren’t sure about each other’s calls,” Diaz said. “We would be questioning and questioning and then you would get really into the match so you’d just start screaming and yelling.”

Aubets, Moinard and Nadozie all went down in two sets against their opponents, while freshman Abbie Mulbarger had her game called while down 2-5 in the third set, after the overall match was decided.

On court one Buth and Anderson played a three set game, with Buth taking the first set 6-4, before losing the second 1-6.

In the third set Anderson jumped out to a 5-0 lead, and was able to withstand a frantic comeback, after Buth double faulted while serving on deuce with a chance to even the score at 5-5.

“My serve for me was super hard today because it was windy with the toss,” Buth said. “On the last one my toss was terrible so I should have not hit that one, but yah I missed that one and it was game.”

SDSU will continue its six-game homestand with a match on Feb. 16 against the University of Southern California.