Coffee shops in San Diego have grounds to brew popularity 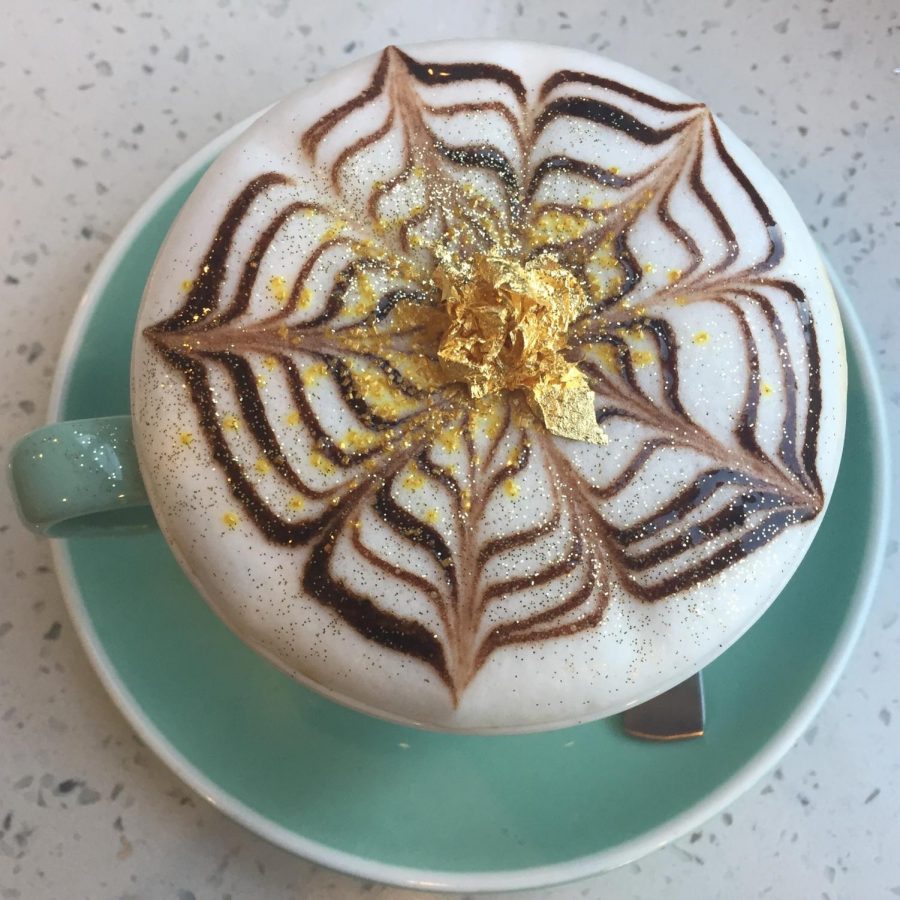 S3 provides a little bling on floating on top of the 24k Cappuccino, made with cookie butter.

With several coffee shops on campus at San Diego State, it can be tempting not to venture too far away to explore the San Diego coffee scene. Sticking to the campus’ shops means missing an abundance of uniquely flavored, hand-crafted lattes, finding the most comfortable study spot or taking the perfect picture to post on social media. Whether spots are best for studying, brunch or Instagramming, here’s a list of coffee (and tea) shops to try this spring semester:

A bustling strip mall is an unlikely location for a high-quality cafe, but S3 Coffee Bar on Mission Gorge Road is a spot that shouldn’t be skipped.

Owned and operated by sisters Claudia, Jenny and Veronica Kwong with their mother May since June 2016, the name “S3” symbolizes the three sisters who co-run the space, and their tagline to sip, smell and savor the drinks they brew up.

The sisters originally opened the cafe so that their mom would have a job when she moved to San Diego from Texas, but they enjoyed working in the shop so much that they started working more hours there, Claudia Kwong said.

Without compromising flavor for aesthetics, their lattes are as tasty as they are gorgeous. The rainbow, or birthday latte, weekend special originally began when the sisters were trying to practice latte art by using food coloring instead of wasting espresso. After debuting it for their first anniversary last year, the drink gained popularity amongst customers and continues to be the most ordered beverage.

“We introduced it during our one year anniversary, we kind of introduced it for two weeks just to celebrate, and people kept asking for it,” Claudia Kwong said.

S3 is best suited for an afternoon coffee break or weekend brunch — complete with an Instagram photoshoot — but it is not ideal for studying. Try the 24k Cappuccino, a cookie butter latte topped with 23.75k gold leaf, or the avocado toast with prosciutto and the rose gold latte made with herbal tea, honey-rose syrup, rose petals and edible gold glitter.

A craftsman-style house on Adams Avenue in University Heights has changed hands several times over the last few years, but the space has consistently been used as a coffee shop in its recent history. It’s current incarnation — Meráki — has the friendliest service and the most inventive drinks compared to its predecessors, and the combination of those two aspects will hopefully give it long-term staying power.

Owner April Brandenstein, who graduated from the New York Restaurant School (now the Art Institute of New York City), was in the restaurant industry for 18 years before opening Meráki in 2016.

“I have always wanted to open my own cafe, mainly because I have always felt the most comfortable in the kitchen. Cooking for people is what enlightens my heart and makes me happy,” Brandenstein said. “Every place where I have worked, has led me to where I am now.”

She said she has been surprised by “the love and support we received” from local customers in University Heights, calling the support “unprecedented.”

Sip on the lavender, horchata or ginger honey lattes while you enjoy the peaceful garden area out back, or sit and study in the main dining room.

As the coffee brewing scene in San Diego continues to grow and improve, so does the number and quality of coffee roasters in the city. The downtown James Coffee Co. roasting shop fills cups in the cafe locations in Little Italy and Bankers Hill, and their beans can be found in other businesses throughout the city.

To learn to pour latte art or how to properly brew coffee in a variety of techniques, check out the class schedule that has events throughout the month.

Try the honey cinnamon, horchata or chai lattes, or experience coffee beans in an unadulterated state with a cup of its single origin pour over coffee or a shot of espresso.

Those are the first four words to remember during a visit to Holsem Coffee in North Park.

When owner Salpi Sleiman first moved to San Diego from San Francisco, she quickly realized that there were no third wave coffee shops, and she said that North Park’s hip, urban food scene was the perfect location for the concept.

Marrying bartender skills to the boutique coffee scene, Sleiman said she strives for Holsem to be the Apple of coffee shops with great customer service, a high quality product and an efficient production line.

Sleiman said all of the menu items are “wholesome,” meaning she uses high quality, ethically-sourced and natural ingredients in all of her pastries and beverages. She said she does not use refined sugar, referring to it as “poison,” so the syrups are made with unrefined, evaporated cane juice.

All syrups are made in-house and most of the drinks at Holsem are made using sweetener as a separate ingredient, so it can be reduced or omitted upon request, she said.

The strawberry malt latte — made with strawberries, malt and housemade vanilla syrup — and the lemon meringue cold brew are two of the most unique items on the current menu at Holsem. Aside from those and the banana bread cold brew, other notable drinks and snacks include the Nutella cold brew, and the gluten-free brownie topped with sea salt.