Breaking down the budgets of SDSU’s 7 colleges 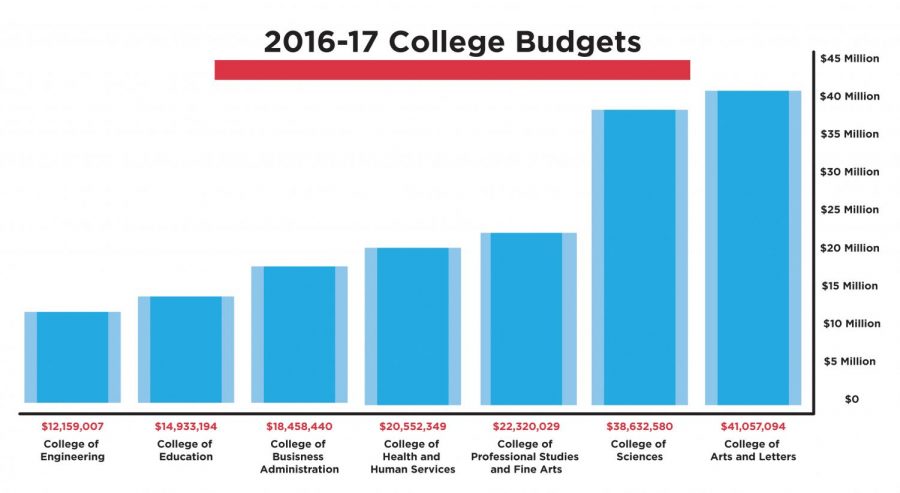 Where did all of that money go?

Out of the university’s budget of $387,002,408 during the last school year, the most costly subsection is academic affairs, calling for $133,203,902 in funding according to SDSU’s budget book.

The College of Arts and Letters has the highest funding, at more than $41 million, as well as the most academic programs with 37. However, its enrollment falls short of many other colleges — it had just 4,206 students in fall 2017, compared to 6,032 in the College of Business Administration.

Enrollment and number of programs, although significant, aren’t the only determinants in which college gets the most funding.

While the College of Business Administration has the highest enrollment, its budget approaches $18 million. Most of the colleges’ annual budgets sit between $15 million and $23 million, with the College of Arts and Letters and the College of Sciences being major exceptions.

The College of Sciences had a funding budget of more than $38 million for the 2016-2017 school year, servicing 5,824 students as well as 24 major programs, according to the budget book and SDSU analytic studies and institutional research. Their high budget is primarily due to costs in their operating budget, which is the part of the budget that looks at supplies, services and equipment.

“The College of Science has lots of labs that require lots of equipment,” Prislin said. “Therefore, they have substantial funding in the operating department of the budget.”

On the lower end, the College of Engineering operates on the smallest budget of the group at $12,159,007. This college has 12 major programs and an enrollment of 4,270 students.

The College of Health and Human Services has a funding budget of $20,552,349. This college contains 17 academic programs while enrolling 4,933 students, according to  SDSU’s Office of Analytic Studies and Institutional Research website. This is followed by the College of Professional Studies and Fine Arts, with a budget of $22,320,029 as well as 29 different programs and an enrollment of 4,754.

Lastly is the College of Education, with the second smallest budget sitting at $14,933,194. This college has the lowest enrollment at 1,839 students split between 13 programs.

The budget is decided on incrementally, meaning it is adjusted upward or downward on a yearly basis dependent on each college’s needs, Prislin said. For example, if a college needs to hire more professors, their budget may be increased to account for new staff salaries.

“We start with what we have at the end of one fiscal year and we either augment it or sometimes reduce it by whatever variable factor we have to address,” Prislin said.

The specifics of the budget are discussed both at the system and local levels in different capacities, dependent on what aspect of the budget is at hand.

Decisions made regarding the budget at the local level occur through a process of shared governance. When decisions have to be made about investing in certain critical needs, requests for the funding are taken to the Presidential Budget Advising Committee (PBAC), which consists of faculty representatives, a student representative and a senate representative.

“These (requests) are discussed in the context of our strategic plan and the critical needs,” Prislin said. “Of course, they are responded to within the constraints of the available money.”