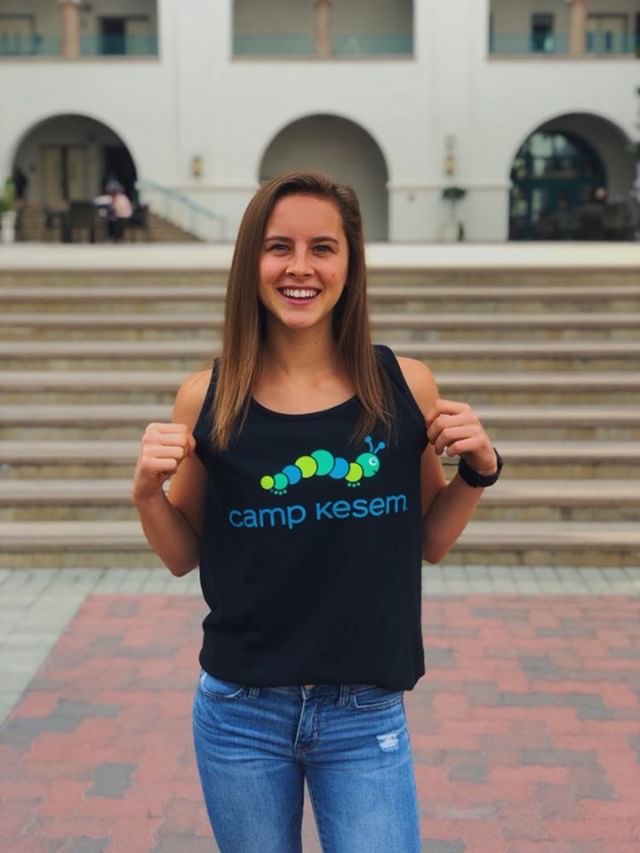 Mechanical engineering sophomore Olivia Di Santo shows off a Camp Kesem tank top. Di Santo was one of the students who pushed to bring the summer camp to campus. Photo courtesy of Olivia Di Santo

Thanks to students’ efforts, a summer camp for children whose parents have cancer is coming to San Diego State’s campus.

Camp Kesem is a community with chapters in colleges nationwide that fundraise year-long to provide a free week of summer camp for these children.

Mechanical engineering sophomore Olivia Di Santo is among the students who successfully pushed to get SDSU a Camp Kesem chapter.

Di Santo said that if everything goes as planned, the chapter will be on campus in fall 2018, and the first camp will be held during summer 2019.

Online voting for new chapters was held between Jan. 29 and Feb. 2. The top six out of 12 competing schools nationwide were awarded a Camp Kesem chapter at their university. SDSU ended in third place with 7,950 votes.

Di Santo said that on the last day of voting, she reached out to friends and family and used social media to get people to vote.

“College students are busy, and they do not like when people hand them flyers or force them to do anything,” Di Santo said. “But I am way too passionate about this cause to let that get me down and stop me from getting the word out.”

Di Santo, alongside mechanical engineering freshman Tyler Leptich, submitted the application to enter SDSU for a chance to expand Camp Kesem on campus.

Leptich said he has attended the camp at UC San Diego’s chapter for six years and the experience changed his life.

“It put things into perspective, knowing what could happen and having friends that were going through and had been through similar things that I was going through,” Leptich said. “It helped me cultivate a strong group of friends that I still talk to to this day.”

Now that SDSU will have a chapter, it is Di Santo’s goal that the kids on the waitlist at UCSD will be able to attend camp on the Mesa.

Di Santo said the process of putting the paperwork together to bring the chapter to SDSU was a months-long process.

“I started working about seven months ago,” Di Santo said. “Gathering names of people who were interested, a list of over 100 companies in the San Diego area that would be willing to donate, at least 15 people who wanted leadership roles, advisers, faculty advisors, and the list goes on.”

She said that although she hasn’t been to camp herself, she has heard nothing but positive reactions from people who have attended.

Spanish sophomore Darek Dabadghav said he attended Camp Kesem at UC Berkeley for five years. He said he couldn’t be more excited about bringing a chapter to SDSU.

“I’m in a fraternity here at SDSU, Phi Delta Theta, and I’m using not only my own fraternity as a resource but other fraternities in spreading the word and voting for Camp Kesem,” Dabadghav said.

He said the camp is an important resource for kids who are dealing with the stress of having a parent with cancer.

“I realized how important of a resource it is for kids going through what we’re going through,” said Dabadghav. “Because a lot of time when we walk around and are dealing with these things, even though we have supportive friends and a supportive family, a lot of people don’t really understand how we feel. Unless you’ve been there and felt those emotions it’s really hard to give a genuine understanding to someone in that situation.”

He said attending the camp is one of the most memorable experiences he’s ever had.

“Going to a place where you’re surrounded by kids your age that are going through the same thing as you it’s just amazing,” said Dabadghav. “You can talk about it or choose not to talk about it. You can just have fun and have that silent knowledge that these kids understand you. You feel safe, you have a group.”