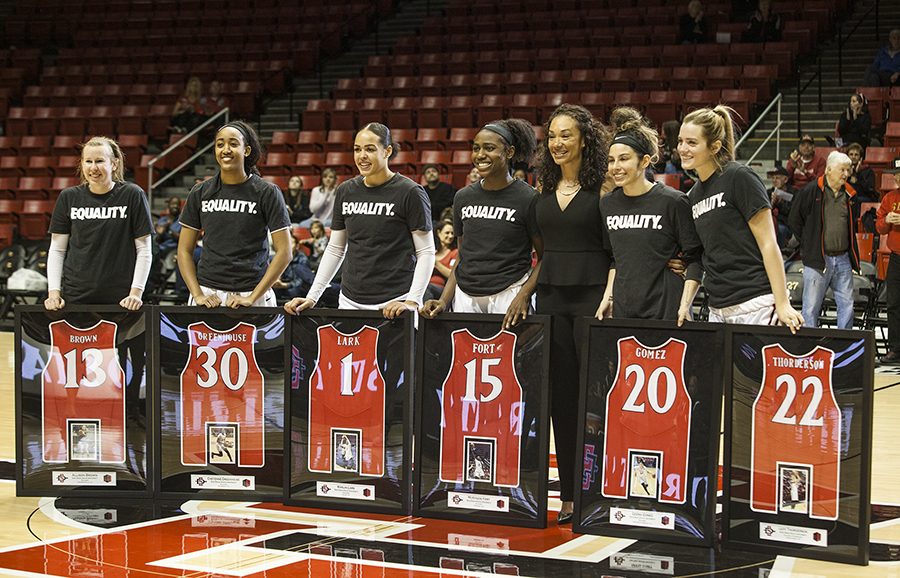 San Diego State women’s basketball honored its six senior players prior to its game against San Jose State University on Saturday afternoon, before defeating the Spartans (7-20, 4-12 MW) by a score of 85-78.

“It was an exciting moment for all of us for different reasons,” Lark said. “It was kind of a crazy day because we were all hyped up, obviously this is our last home game, our last game at Viejas, a little bit bittersweet.”

Thorderson, who suffered a knee injury in January which ended her season, was given a symbolic start, and played the first six seconds before exiting to hugs and tears.

“One of the biggest things we focused on was always trying to play for (Thorderson) and like (Thorderson),” Gomez said. “Because whenever she did play she was always playing hard.”

Gomez had a career-best 22 points to lead five Aztecs players in double figures.

“Nice way to go out, especially with the class and everybody that was playing on the floor and having those people out there with me,” Gomez said. “I wouldn’t want anybody else giving me the ball or playing on the court with (me) so (it was) pretty cool.”

The game was tight heading into the final period, with the Aztecs holding on to a slim four point lead, but an 11-0 run helped SDSU separate itself for a 75-56 lead with 4:30 to play.

“I think the senior class was just out there fighting and everybody did what they needed to do to contribute to the game,” Fort said. “The underclassmen also played hard… and I think it showed on the court.”

Lark (seven points, seven rebounds) made a key three-pointer – her first and only make of the game in seven tries – to help her team begin to pull away at the beginning of the final period, and said that even when you’re struggling you just have to keep shooting.

“Shooters shoot, so you have to let everything else go in that moment,” Lark said. “You kind of just play and forget what’s going on, what you missed, what you haven’t done, and focus on the fact that you’re wide open.”

The Spartans tightened the gap, but SDSU held on enough for head coach Stacie Terry to pull her seniors for a standing ovation up by 12 points with 59 seconds left.

“I was a little scared because of the way they were trying to come back there, but I was happy that I was able to get them off the floor and also give some of our players some time in some crucial moments,” Terry said. “It was great for them, great for the crowd, great for their families. This is my favorite game of the year because everyone’s here.”

It was a tale of two quarters in the first half, with the Aztecs jumping out to an early 10 point lead in the first quarter, after an 11-2 run was punctuated by a layup from freshman guard Te’a Adams (four points, three assists).

The Spartans shot only 19 percent from the field in the opening quarter, and made only two of their last 17 field goal attempts.

The script was then flipped in the second quarter, with SJSU using a 15-1 run to pull within 29-28 with 2:56 left before halftime.

The Aztecs, who shot only 30 percent from the floor in the period, missed 12 consecutive field goals during the Spartans run, and emotions began to run high between the teams.

“We just have extra emotion when it comes to San Jose,” Lark said. “There’s a little bit of stuff, talking on the floor, and a little bit of fight in them so it makes you play the same way.”

One particularly tense moment was when Murray appeared to yell “look at the scoreboard,” to heckling SJSU fans in the stands, as she ran back down the court after missing a free throw.

SDSU led 29-20 at the time, before the Spartans cut into their lead, eventually going up 33-32 with 1:06 left before halftime after a three pointer by freshman guard Megan Anderson (nine points, six rebounds).

The Aztecs would score the final four points of the half, however, to go into the break with a 36-33 lead.

While this was the last home game for SDSU this season, the team still has two games to play before heading off to Las Vegas for the Mountain West Conference tournament, starting on March 5.

Winning the tournament will be the only hope for the Aztecs to reach this year’s NCAA Tournament, but win-or-lose, what Terry said her seniors will leave behind is their dedication and hard work.

“This group is resilient, no matter what the outcome, win or lose they’re always ready to come back and get better the next day,” Terry said. “That’s really what the legacy that they’re gonna leave is, their work.”