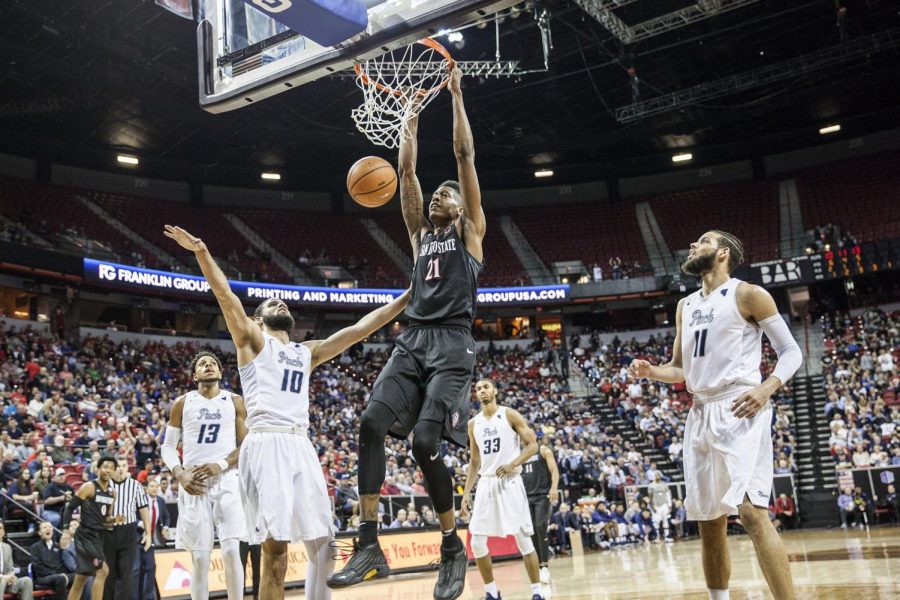 Malik Pope dunks the ball during the Aztecs 90-73 victory over Nevada on March 9 at the Thomas & Mack Center.

San Diego State men’s basketball turned the Thomas & Mack Center into Viejas Arena 2.0 on Friday night, running regular-season champion No. 22 University of Nevada off the floor during a 90-73 clobbering in the Mountain West tournament semifinals.

The Aztecs had an opening half to remember, leading by as many as 34 points before going into the break with a 55-25 advantage.

The large contingency of Nevada fans who made the trek from Reno to Las Vegas sat stunned, while SDSU faithful hooted and hollered as the game quickly went from bad to worse for the tournaments No. 1 overall seed.

Nevada made a late 8-0 run in garbage time to cut the Aztecs lead to 84-67 with 1:26 to play, but the game never appeared in doubt as SDSU cruised to victory.

“We’re excited to have a chance to play for the conference championship tomorrow, and get a chance to get in the NCAA tournament,” head coach Brian Dutcher said.

The Aztecs improve to 21-10 overall while increasing their winning streak to eight games, and will now await the winner of the nights other semifinal matchup between No. 7 Utah State and No. 3 New Mexico.

“I know our team will be ready and so will our opponent,” Dutcher said. “I think it’ll be a great matchup tomorrow whoever it is.”

With the loss, Nevada drops to a record of 27-7, and the team will now have to play the waiting game to see if its ticket gets punched for the NCAA tournament.

We certainly feel like we’re one of the best teams in the country without a question,” Nevada head coach Eric Musselman said. “We certainly think that the NCAA tournament selection committee looks at an entire body of work, so yes, we feel like we’ve done more than enough based on how we’ve played an entire season.”

SDSU was led on offense by junior guard Devin Watson, who had 14 of his team-high 20 points during a blistering first half which saw him sink four of five shots from behind the arc.

“They kept going under me so as they come up under me I just had to be aggressive, take my shots, and they went in,” Watson said.

McDaniels picked up his ninth double double of the season within two minutes of the start of the second half.

This is the first MW conference tournament for both McDaniels and Mitchell, but McDaniels said that there is a reason the two aren’t playing like you might expect freshmen to.

“We just want to go out there and compete, play at a high level. And I feel like (Mitchell and I) we’ve been doing that,” McDaniels said. “We’re not freshmen anymore, the season is almost over.”

The victory was the second loss in six days for Nevada against SDSU, which beat the Wolf Pack 79-74 on March 3 at Viejas Arena.