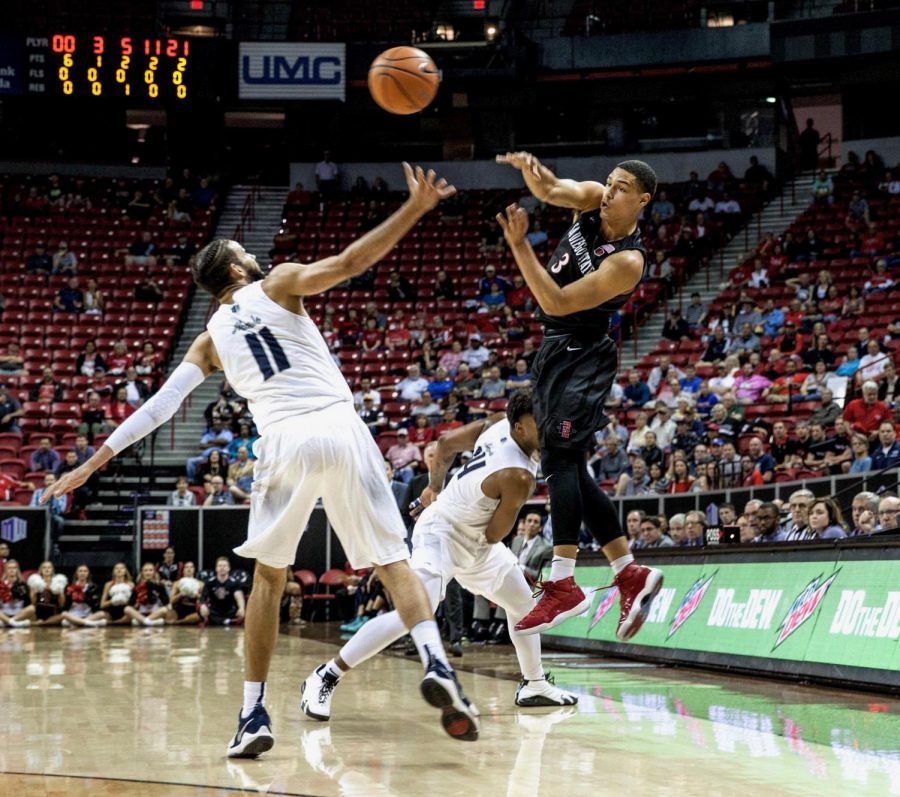 Trey Kell throws a pass during the Aztecs 90-73 victory over Nevada on March 9 at the Thomas & Mack Center in Las Vegas.

San Diego State men’s basketball will face off with University of New Mexico in the Mountain West tournament championship on March 10, exactly one month to the day of the Aztecs last loss.

No. 5 seed SDSU (21-10) was the hottest team in the conference going into the tournament, and has done little to cool down, posting double digit victories over No. 4 seed Fresno State University and No. 1 seed University of Nevada to extend its season-high win streak to eight games.

A date with No. 3 seed New Mexico (19-14) is now the only obstacle standing in the way of an Aztec return to the NCAA tournament for the first time since the 2014-15 season.

“We’re excited to have a chance to play for the conference championship tomorrow, and get a chance to get in the NCAA tournament,” head coach Brian Dutcher said.

The Aztecs head into the championship game with not only the longest winning streak in the MW, but with the eighth longest streak in the entire country.

“I feel like we have a lot of momentum, a lot of confidence going into tomorrow’s championship game,” freshman forward Matt Mitchell said.

The Lobos have a seven-game win streak of their own, and defeated No. 6 seed Wyoming and No. 7 seed Utah State to reach the final.

SDSU lost its only meeting against New Mexico this season, falling in a January road match which saw the team blow a 10-point halftime lead.

Senior guard Antino Jackson scored 24 points to lead the Lobos in their 79-75 victory over the Aztecs, with junior guard Anthony Mathis chipping in 21.

It was only one month ago that SDSU suffered its second consecutive loss, an 83-58 beatdown at the hands of Nevada, dropping the team to a record of 13-10.

The Aztecs flipped the script in Friday’s semifinal matchup, building a 34-point lead against the Wolf Pack in the first half, before cruising to a 90-73 victory over the MW regular-season champions.

The victory was SDSU’s second in six days over Nevada, which lost only three conference games all season while compiling a 26-6 record heading into the tournament.

Junior guard Devin Watson played a big role in the Aztecs semifinal triumph, scoring 14 of his team-high 20 points during the first half, and said that this team is finally playing up to its potential.

“(We were) tired of losing,” Watson said. “We knew our potential. We knew how good we could be, we just wanted to prove it to ourselves and to everybody.”

Watson was asked how hungry the team is to win the title and make it back into the NCAA tournament.

This will be the 11th time SDSU plays in the conference championship game, as it attempts to win its sixth MW tournament crown.