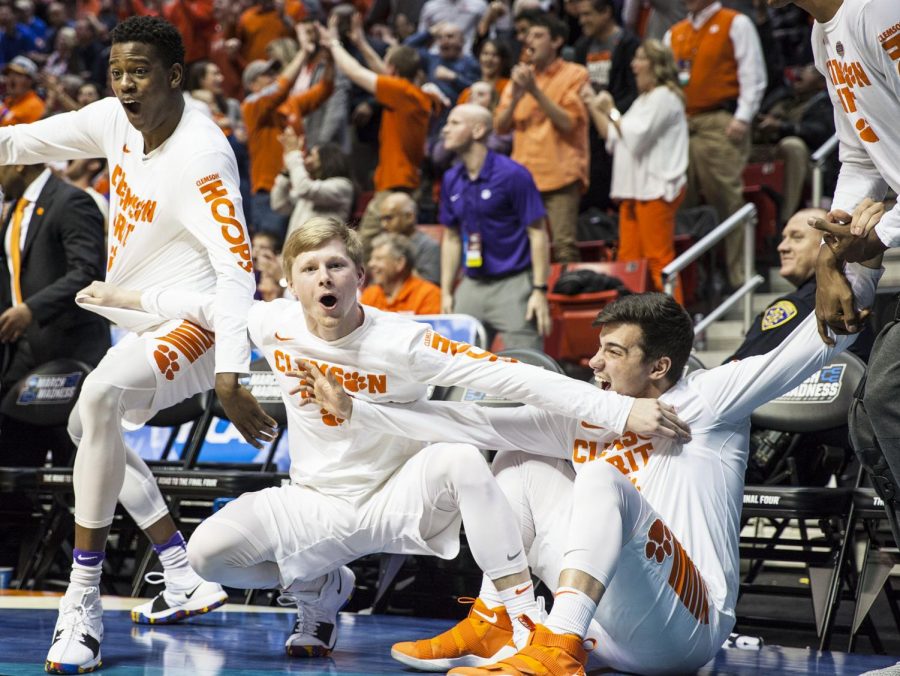 Clemson players react during the Tigers 79-68 victory over New Mexico State on March 16 at Viejas Arena.

New Mexico State came into the NCAA tournament with a record of 28-5 and on a six-game winning streak.

NMU swept through their conference tournament, and looked like Goliath in the Western Athletic Conference.

On Friday night, the Aggies looked like a 12 seed against No. 5 University of Clemson.

NMU made a run late, but ultimately could not keep pace, falling 79-68 to get eliminated in the first round of the tournament at Viejas Arena on March 16.

“(DeVoe, Shelton and redshirt junior guard Marcquise Reed) can play. If we just give them space and tell them to make plays. It’s as simple as that,” Brownell said. “I’m just proud of our guys for believing in our team, believing in what we do, how we do things.”

Back-to-back three pointers from NMU junior guard Keyon Jones got the Aggies to within 60-49 in the second half, and the team would get as close as 68-62 after a 10-2 run which included eight points from graduate guard Zach Lofton.

Lofton, who led the Aggies with 29 points to go with four rebounds, said after the game that the team just could not make the play to get over the hump.

“We’ve been in that position before,” he said. “We’ve come back from deficits like that, (we) just couldn’t get that big stop and score that we needed.”

Clemson answered the run with seven straight points from Mitchell, increasing its lead back to 13 with 2:33 to play, and putting any hopes of an Aggies comeback to bed.

“Coach called a lot of good plays, and I knew we had to execute. So the execution was key in that situation,” Mitchell said. “We have a bunch of good guys on our team. We all can make plays at any time. Today it just happened to be me.”

Clemson moves on to face No. 4 University of Auburn in the Round of 32 on Sunday.