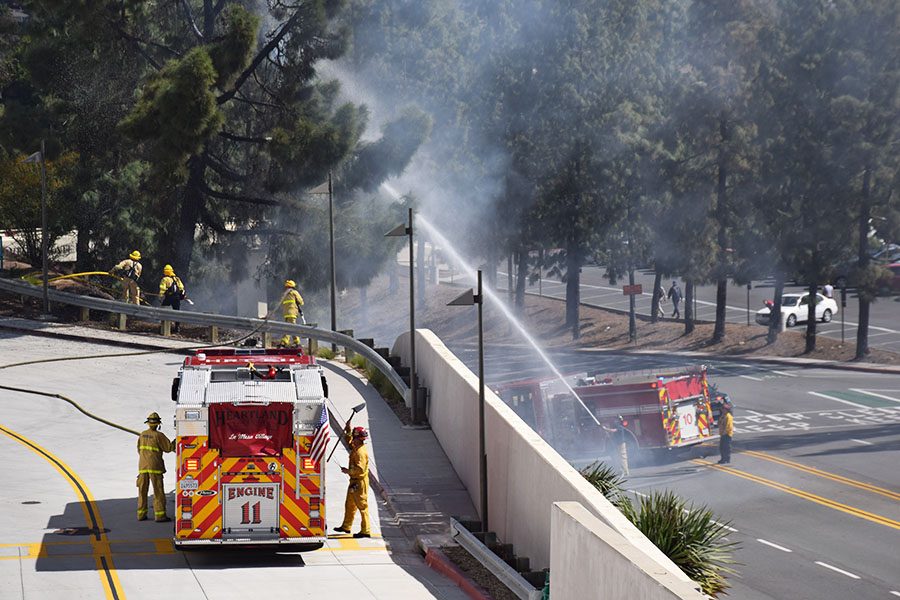 by Will Fritz and Lauren J. Mapp

Firefighters made quick work of a small brush fire on the east side of San Diego State’s campus Wednesday morning.

The blaze — about 20 feet by 40 feet in size — was reported at 10:52 a.m. in the 5300 block of College Avenue, according to San Diego Fire-Rescue spokesperson Monica Munoz.

The area is on a slope adjacent to College Avenue and the Conrad Prebys Aztec Student Union.

A video of the fire appears to show a tree on the slope engulfed in flames.

“They got units to the scene as quickly as possible to (block) off the area,” he said. “Fire was en route, fire arrived, they put the fire out in short order. There’s some burnt-up brush there on the hillside.”

Officers closed southbound lanes of College Avenue between Alvarado Road and Lindo Paseo while crews worked the fire. It was out by about 11:40 a.m., according to an alert from university officials.

Business management junior Ethan Barbieri witnessed the fire before the first responders were at the scene.

“I was walking out of (the Education and Business Administration building), and I see the patch of brush over there on fire, next thing I know — I was like 10 feet from it — the whole tree just blew up,” Barbieri said. “It was crazy, everyone was going ballistic, and the cops came and said we can’t be close. And it was hot, you could feel the heat.”

Theatre senior Joshua Cruz also saw the blaze as it was starting. He filmed the fire and posted the video to his Snapchat account.

“It’s surprising. A live tree caught on fire,” he said. “It didn’t look like it was dry or dead, but still surprising that in a matter of seconds, with just the snap of a finger, it got caught on fire.”

Munoz said no structures were threatened by the fire and no injuries were reported.

The cause of the fire is unknown, said university police spokesperson Raquel Herriot.

12:40 p.m.: This article was updated with interviews from Kaye, Barbieri and Cruz.