‘Life after sports’: Panel discusses what athletes do when they’re no longer athletes 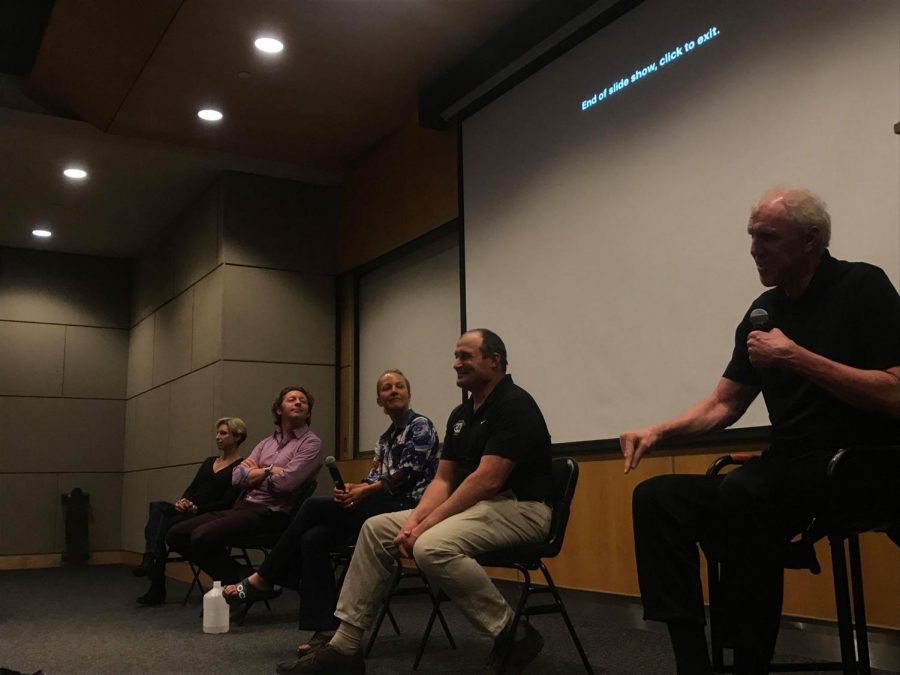 From left to right, Paula Newby Fraser, Simon Marshall, Leslie Patterson, Nico Marcolongo and Bill Walton discuss how former athletes deal with the ends of their careers at the "Life After Sports" panel.

The notion that a person should not base their identity on one aspect of their life is not new, but has long been ignored by many professional athletes, according to a lecture that took place on campus last month.

“Life After Sports,” which was held at the Fowler Athletics Center on March 21, featured a number of speakers who are well-versed in athletics and sports psychology. The topic at hand – the dangerous tendency of athletes to allow their athletic abilities to overtake their identities.

“Athletic identity is the extent to which you see yourself as an athlete,” said Simon Marshall, former San Diego State sports psychology professor and performance psychologist for BMC Cycling.

He said while the mental tendencies of most athletes don’t fall into the realm of extreme abnormality, this does not mean they are healthy. When an athlete’s identity becomes that they purely see themself as an athlete and pursue no outside interests, Marshall said the mental repercussions can be damaging.

Marshall said the harm comes when the one thing their identity is based on – in this case, athletics – is taken away from them.

Nico Marcolongo, senior manager of Operation Rebound Challenged Athletes Foundation , an organization that seeks to rehabilitate veterans through athletics, said the post-career experience of a professional athlete is comparable to a veteran’s transition back to civilian life. He said the central barrier in transitioning is the fact that norms in a war environment fall far from of the norms that have been accepted in civilian life.

“There are commonalities between the high an athlete gets and the feeling soldiers get when they’re at war,” Marcolongo said.

For many veterans, Marcolongo said they are not used independence since they often join the military immediately following high school, leaving them overwhelmed with the many freedoms of civilian life. This compares to Marshall’s notion that the lifestyle of a professional athlete who has little focus on outside endeavours becomes vastly different when the sport is no longer a part of their life.

Paula Newby Fraser, an eight-time Ironman Triathlon world champion and 1990 Professional Sportswoman of the Year, said he is able to understand this topic from the unique perspective of a successful athlete who embraced a “mixed identity.” She said her South African roots largely contributed to this aspect of her personality.

“I grew up in the absolute full-throttle heart of apartheid,” Fraser said. “This context set me up to be a very balanced athlete.”

Fraser said even though her school was segregated by race and gender, she was always overwhelmed with encouragement in both academics and athletics. However, following her success in athletics, she said there were still many aspects of her life that sought to reinforce her identity purely as an athlete.

When going out with friends, Fraser said she would always be introduced by her friends with the same statement: “Did you know she won the Ironman eight times?”

This became an issue where Fraser said she wanted to be viewed as a “smart business woman” but could not be separated from her identity as an athlete, for no reason other than her friends’ perceptions of her.

Fraser said her blended identity never shut the door for her, although she will always be an athlete.